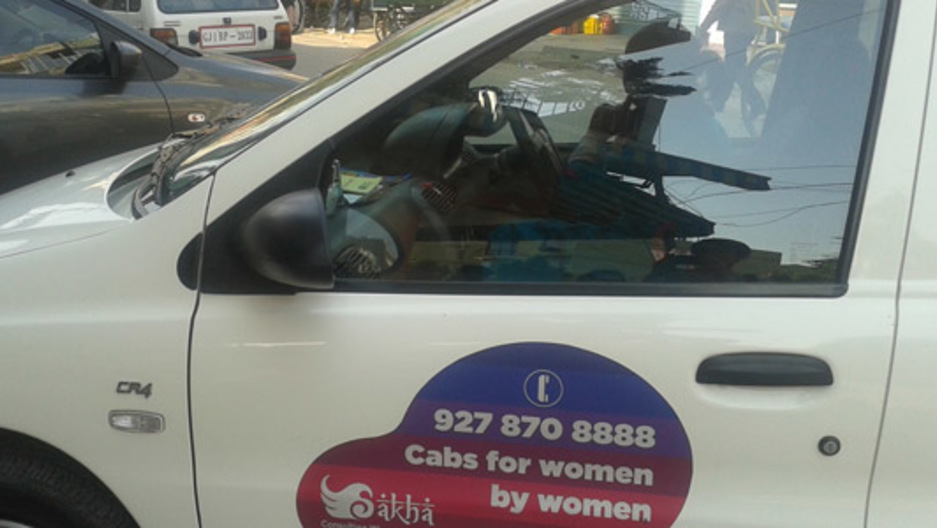 Cabs for Women by Women is a small service run by a non-profit. Since the recent gang rape of a 23 year-old medical student in Delhi, the service is becoming increasingly popular. (Photo: Rhitu Chatterjee)

The recent gang rape and murder of a 23-year-old medical student in New Delhi has shed new light on just how unsafe the city is for women. Most women in Delhi say that they routinely face harassment — and worse – on public transport and on the streets.

It has forced many to adopt a range of measures to deal with the problem. Women who can afford it have their own cars, many with chauffeurs. Others move around in the company of family and friends. Many have to risk public transit.

But now, there's another option. At least for a few women in the city.

It is a small service that offers safe transportation for women. And it started off as an experiment.

The service is called Cabs for Women by Women. It is a small service; just seven cabs and eight female drivers. They only pick up women.

I got a ride with 31-year-old Shanti Sharma. She says the popularity of their service has spiked since the gang rape in December.

"After this case, our work load has increased so much," she says. "Women who used other cab services are also turning to us now."

These are middle-class women and relatively affluent, especially those who travel alone a lot. And some like me are new to the city, or just passing through.

Sharma tells me that one customer recently told her that even if it's more expensive than most car services, and you have to call ahead and book it, it's worth it. Especially so after last month's attack.

Sharma is happy to be providing this service.

"When I'm on the road driving our cab I feel very proud, because this is a cab service for women, and I'm a woman," she says. "Our work is supporting the women of Delhi. We're giving them safety."

But safety for women is just one goal, says Nayantara Janardhan, who is with Sakha Consulting Wing, the non-profit that runs the cab service.

She says the project was a joint effort with another group, Azad Foundation, which helps urban women from poor and marginalized communities.

"Azad foundation wanted to provide non-gender typical livelihood options to be able to allow these women to earn at par with the men," says Janardhan. "They wanted to put women in charge of technologies. They wanted to open up boundaries for women. And they wanted to ensure these women end up as well rounded professionals and people who are aware of their rights."

The cab service is only a small part of Sakha's operations.

"We have almost 50 women who're working with many families, with individual women and women with children (as private chauffeurs)," says Janardhan.

Shanti Sharma started out as a chauffeur for a 50-year-old blind woman.

She liked the fact that the job involved helping a disabled woman move around safely and independently.

But she says she also enjoys the independence of driving a cab.

She is a single parent with three daughters. Their names are Suman, Simran and Shruti, she tells me with a proud smile.

Sharma says she makes around $250 a month in this job and that this is the first time in her life that she is earning enough to support her family.

"Ever since I started doing this job, I feel like I've reached my destination. I don't want to change jobs anymore."

But Sharma says being a woman cab driver is a lonely business, because she and the other female taxi drivers are completely outnumbered by male cabbies.

"When I park somewhere, there're always men there and inevitably five or six of them get together and hang out," she says. "But I'm usually the only woman in the parking lot, so I just stay inside the car. So then I wish that even one more woman driver would have been nice, to hang out with."

It's not much better when she is out on the road. Sharma says the male drivers give her a hard time.

"As soon as they see a girl at the wheel they start honking for no reason, they'll try to overtake you. I'm always worrying about how to avoid getting hit by someone."

Soon, I get to witness what she means. At one point, as she prepares to make a U-turn, a few cars back up behind us.

The driver of a government jeep right behind us starts honking persistently. It seems like the other drivers are staring at us – a woman driving a woman.

Sharma looks a little tense, but she laughs and shrugs it off.

"How can I turn if there are such heavy traffic in front? Tell me? I don't know what to say."

The only way to change the attitude of the men, she says is to have more women driving.

And perhaps, I think to myself – more women demanding to be safe, on the road and wherever they're heading.