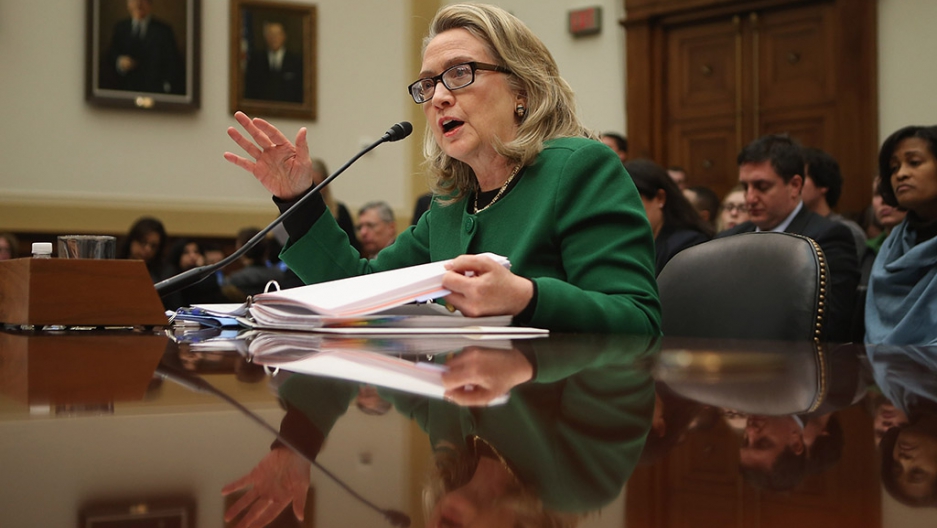 Secretary of State Hillary Clinton testified in front of the Senate on Wednesday morning about the attack on a US consulate in Benghazi that left four Americans, including the US ambassador to Libya, dead on Sept. 11 of last year.

While answering questions on Benghazi, Clinton drew a clear connection between the ouster of former Libyan leader Muammar Gaddafi and the increase in militancy in neighboring Algeria and Mali.

"The Pandora's Box of weapons coming out of these countries in the Middle East and North Africa is the source of one of our biggest threats," said Clinton, while answering a question on the recent attack in Algeria that saw dozens of foreign workers taken hostage by Islamist militants at a gas complex.

According to ABC News, the man who masterminded the attack in Algeria, Mokhtar Belmokhtar, had said in November 2011 that his people "benefitted" from the black market weapons caches stolen from Gaddafi's warehouses in Libya.

During the hearing on Wednesday, Clinton said, "With respect to Mali, Senator, there was a country that had been making progress on its democracy. Unfortunately, it suffered a military coup by low-ranking military officers, which threw it into a state of instability."

"With the Tuaregs... some groups of [them] as well as other groups were in the employee of Gaddafi for years. He used them as mercenaries. With his fall, they came out of Libya, bringing huge amounts of weapons from the enormous stores of weapons that Gaddafi had."

"They came into Mali, and at the same time there was a move by Al Qaeda in the Maghreb to establish a base in northern Mali," she added.

"This is going to be a very serious, ongoing threat," Clinton said, of the security situation in northern Africa and the rise of Al Qaeda in the Islamic Maghreb. "We are in for a struggle. But it is a necessary struggle. We cannot allow Mali to become a safe haven."

GlobalPost Senior Correspondent Tristan McConnell, who is now in Mali, said that while Al Qaeda in the Islamic Maghreb is the hottest topic in terrorism in Africa at the moment, it is not the only militant Islamist group on the continent styling itself after Al Qaeda.

"Here in Mali AQIM is part of a coalition of extremist groups that took over the north of the country last year, alongside Ansar Dine and the Movement for Unity and Jihad in West Africa (MUJWA). These groups are believed, by the US and others, to have links to Boko Haram — which was born out of and operates in northern Nigeria.

"While all the groups are either affiliated to or draw inspiration from Al Qaeda, most have their roots firmly embedded in local grievances and nationalistic struggles. Yet their expansion in recent months has turned them into more regional, perhaps even global, threats," McConnell added.

GlobalPost has been exploring the spread of Al Qaeda in northern Africa: Al Qaeda in Africa

Watch Clinton's remarks on Libya, Mali and Algeria, courtesy of the Guardian:

Here is a map of Al Qaeda in Africa: