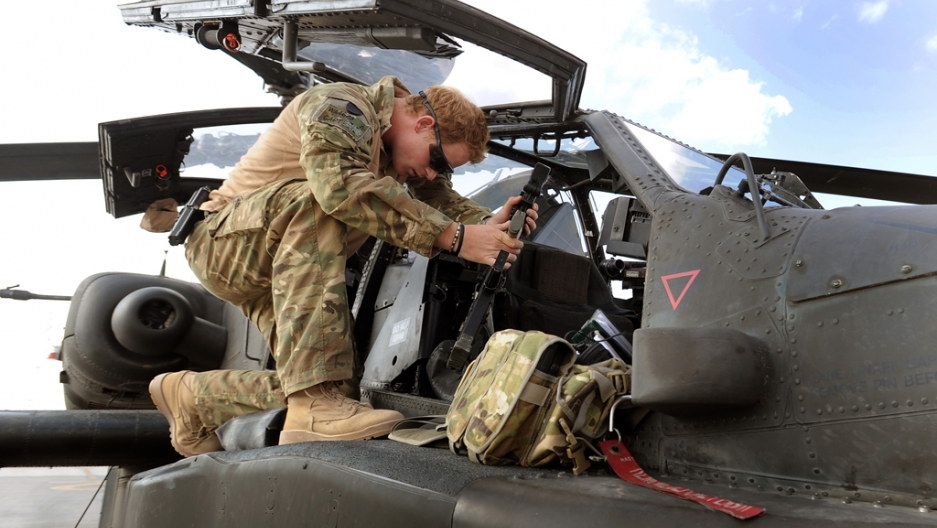 In this image released on Jan. 21, 2013, Prince Harry works on an Apache Helicopter at the British-controlled Camp Bastion in southern Afghanistan. Harry served as a pilot/gunner for four months with the 662 Squadron of the Army Air Corps, from September 2012 until January 2013.
Credit: John Stillwell
Share

LONDON, UK — Prince Harry's emergence from Afghanistan generated largely positive media coverage in the United Kingdom, although most newspaper headlines here focused chiefly on his statement about being responsible for the deaths of insurgents.

The Times of London went for: "Harry on his call of duty: how I killed Taleban."

The prince himself seems to regard the media as more of an enemy than the Taliban. In interviews published in the wake of his exit from Afghanistan he criticizes several UK publications, notably the Daily Telegraph and the tabloid Sun, for their reports about his recent naked hotel romp in Las Vegas.

The Sun, which ignored a royal embargo on publishing photos of the naked prince snapped in Vegas, ran an editorial expressing dismay that Harry was upset over its decision to use images of the unclothed royal.

"We're sorry Harry's got the hump with us over the naked Las Vegas pictures because he has a great sense of fun and we like him a lot," the paper said.

Other editorials offered praise for the prince.

"He has proved a real credit to the royal family for risking his life to serve his country ... His sense of duty reminds us yet again of the selfless heroism of all our armed forces," The Daily Mirror wrote.

The Times added: "In a socially and politically fluid world, the monarchy earns its keep as a symbol of the values and behaviour of a nation. Prince Harry's courage and sense of duty (as much as his vivacity) provide a lens through which to view the spirit and standards of this country.

"He is the first to acknowledge that he has not always got the balance between his professional and princely duties right; that he let himself and his family down by romping in a Las Vegas hotel suite just weeks before his deployment.

"But he has also shown himself to be a mature young man who ... stands ready, alongside his brother, the Duke of Cambridge, to shoulder the burdens and responsibilities of steering the monarchy through the new millennium."

Harry's frank admission that he was involved in the deaths of Taliban fighters is likely to play well with his military comrades, as the prince is clearly burdening himself in collective responsibilities shared by frontline troops.

It comes at a time of low morale for the British armed forces. On Tuesday, it was announced that up to 5,300 military jobs are being cut as part of a wider effort to plug a $60 billion spending shortfall.

However, there were concerns that in candidly admitting his role in using deadly force he would provoke further attacks by Islamic extremists on British targets, particularly in the wake of the recent hostage massacre in Algeria.

Meanwhile, some fans of the royal have been having fun with footage from Harry's interview in Afghanistan: