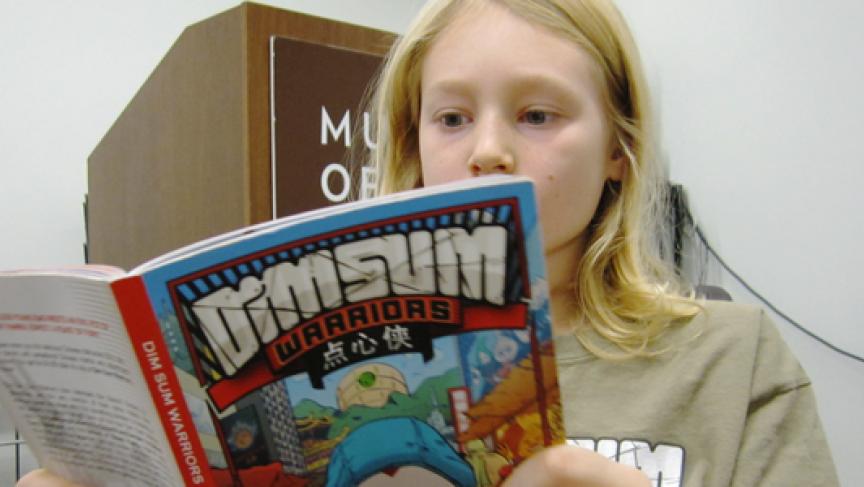 The other day, I was in Chinatown in New York City, eating dim sum with Yen Yen Woo and Colin Goh. They’re a married couple, transplants from Singapore.

For reasons that’ll soon become clear, I couldn’t help imagining that those little Chinese snacks we were eating were…alive. Now, some Asian food items really are alive when you put them in your mouth—but that’s a different story. The dishes we we’d ordered weren’t moving, except for the fact that I’d just viewed them in another form—walking, talking and fighting.

Here’s a taste of Goh and Woo’s creation, Dim Sum Warriors: “Their bravery and skill have inspired millions worldwide, while the mere mention of their names causes enemies to quiver like tofu.”

Dim Sum Warriors is a comic book that started as an iPad app. It started online, and now is out in book form, the reverse of most tech-savvy comic book series.

Goh and Woo created Dim Sum Warriors partly for their daughter, Kai Yen Goh. She’s learning to understand both English and Chinese by using the app.

“We felt especially because we were bringing up a daughter in America we wanted something that would represent her mixed-up cultural heritage,” says Goh.

On an iPad, you can read Dim Sum Warriors in English or in Chinese. Or, you can flip between the two languages. If you want to hear the audio, you tap a word balloon. If you hold your finger on the balloon, you get a translation—script and audio.

Nick Sousanis is a big fan of Dim Sum Warriors. He teaches a class at Columbia’s Teachers College on using comics in classrooms. He says the Dim Sum Warriors is that it makes clever use of some relatively new behaviour patterns.

“If you read the New York Times on the web and you want to know what a word means, you click on it,” says Sousanis. Dim Sum Warriors operates like that. “You can see the action you know what the characters are doing, you see the word. You can associate the word with what that action is. It just synergistically holds together.”

“It’s like you’re doing two things at once but you don’t even know,” says Finn. “You’re learning the language and reading.”

Now, that’s something of dream for language teachers—distracting students with a strong narrative so they want to read on.

Of course, it may not work on all kids. But Finn’s teacher Kyla Huang says Dim Sum Warriors will be a valuable addition to many classrooms. Huang says Chinese teachers in the United States do more than teach. They’re “also authors” of teaching materials because there aren’t enough officially approved materials available in the US.

Yen Yen Woo tried out Dim sum Warriors on some other 3rd graders. She said they liked the idea of Chinese food items talking to each other. But something was missing.

“They all said ‘what about scallion pancakes…and spring rolls?’” says Woo. “They also said teachers should have them read it just before lunch because it’s going to make them very hungry.”

It’s true, you do get hungry. But you also want to read to learn how the likes of Crown Prince Roast Pork Bao fares in the face of the evil Colonel Quicky Noodle. (Woo and Goh describe him as a mixture of Robert Downey Jr and a mutant pot of instant ramen.)

Colin Goh’s favorite character is the pompously-named Master Phoenix Claw, who’s actually nothing more than a chicken foot. But in dim sum menus, chicken feet are described as phoenix claws. “I always envisaged him as a sort of used car salesman,” says Goh. “He’s always trying to pull a fast one on everyone.”

There’s the blend again of Chinese and American culture. Who could be more American than a car salesman? What could be more Chinese than a menu item with an over-the-top name? Put them together and you get something new.

“A lot of the comics in the past have portrayed Asians in this stereotypical way, like you’re either dragon lady or the mysterious Zen master,” says Woo. “We really wanted our child to grow up being confident of her own culture and to see all these character as being part of the universe.”

And so in Dim Sum Warriors there is American-style teenage introspection, but also kung fu fights, albeit enacted by dumplings. Just the idea of a comic book is American, or at least not Chinese. Most Asian comic books are Japanese, though comic book scene in Taiwan is picking up pace.

It’s from Japan, too, that the idea of talking food comes. The Japanese have featured various personified food items in comics and cartoons for years. But with its breadth of characters, Dim Sum Warriors takes things a few wacky steps further.

Even though you can now read Dim Sum Warriors the old-fashioned way, you need to experience it as originally conceived, on an iPad, for the full effect.

To grasp the difference, Colin Goh casts his mind back to when he was teenager, obsessed with Japanese pop culture. He taught himself the language in a painstaking way, “by sitting there with manga and three dictionaries and trying to figure out what they were saying.” The iPad, he says, “enabled us to make the comic into what I would have wanted back when I was 15 years old.”

Another advantage is that apps debut in scores of countries—less of a distribution problem than books. So far, though, there are fewer Chinese using Dim Sum Warriors to learn English than the other way round. Woo and Goh hope to change that with a visit to China later this year.

They even have the idea of turning their fantasy into a stage musical—another American genre making inroads in China.

Here’s a previous post and podcast featuring Colin Goh and Yen Yen Woo. They talk about their role as editor of a dictionary of Singlish, the mashed-up street patois that all self-respecting Singaporeans use.