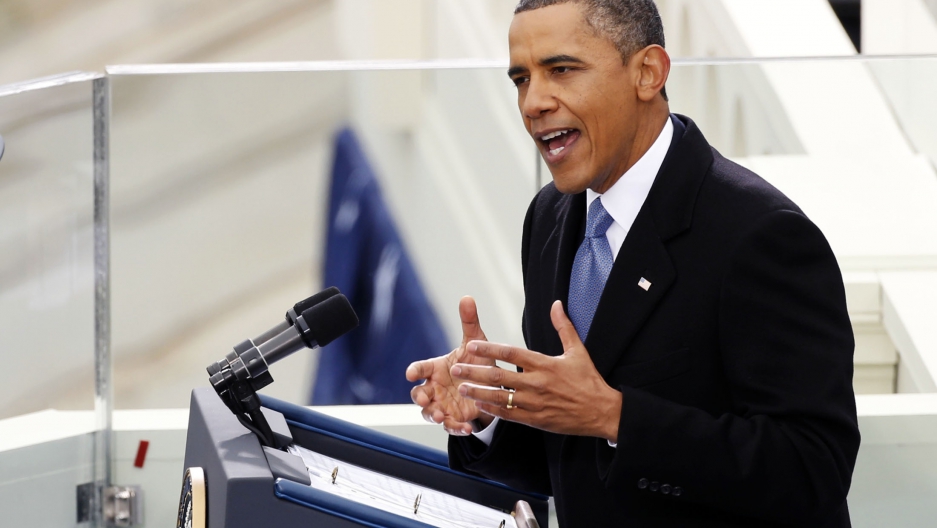 President Barack Obama speaks during swearing-in ceremonies on the west front of the U.S Capitol in Washington, Jan. 21, 2013. (Photo by Kevin Lamarque/Reuters.)

President Barack Obama, in a 20-minute speech after his formal inauguration, laid out an ambitious agenda for his final four years in office.

He touched on climate change, gay rights, immigration reform, taxes, budgets and entitlement reform, laying out a long list of things he'll try to do, and  serving notice to his political opponents.

“Decisions are upon us, and we cannot afford delay. We cannot mistake absolutism for principle, or substitute spectacle for politics, or treat name-calling as reasoned debate,” Obama said. “We must act. We must act knowing that our work will be imperfect.”

Obama's speech was sprinkled with rhetoric, tying his goals to the views and beliefs of America's founding fathers, as well as Martin Luther King Jr.

“We, the people, declare today that the most evident of truths – that all of us are created equal – is the star that guides us still,” Obama said. “Just as it guided all those men and women, sung and unsung, who left footprints along this great Mall, to hear a preacher say that we cannot walk alone; to hear a King proclaim that our individual freedom is inextricably bound to the freedom of every soul on Earth.”

Obama also mentioned the shooting in Newtown, Conn., from late last year, a nod to the impending battle over gun control measures. In that respect, the speech sounded more like a State of the Union speech, than the sort of rhetorical call for compromise and collaboration that inaugural addresses, especially second inaugural addresses, have become known for.

Some 600,000 people, police officials estimated, turned out for this year's inauguration, a far cry from the nearly 2 million who attended Obama's first inauguration.

And while Obama and Vice President Joe Biden formally took their oaths Monday, they were actually sworn in during private ceremonies on Sunday, Jan. 20, per the terms of the U.S. Constitution.