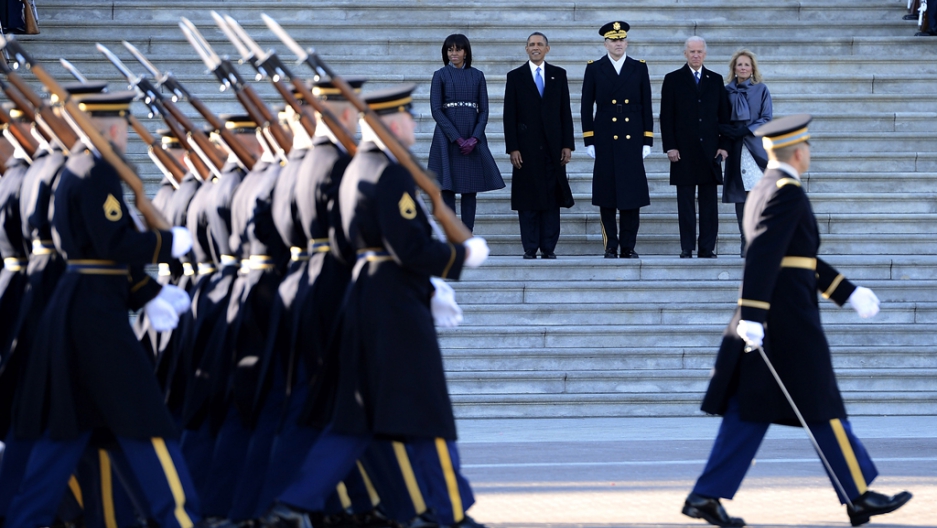 US President Barack Obama (2L), his wife Michelle Obama (L), Vice President Joe Biden (2R) and his wife Dr. Jill Biden (R) and U.S. Army Maj. Gen. Michael J. Linnington (C) watch during the Presidential review of the troops on the east side of the U.S. Capitol following Obama's Inaugural address and ceremonial swearing-in for a second term as the 44th President of the United States on January 21, 2013 in Washington, DC.
Credit: Pool
Share

After President Barack Obama was sworn in for a second term, he gave a well-received – and some noted very progressive – inaugural speech while invoking the founding principles of America.

What he didn't do was say much about America's foreign policy. In his nearly 20-minute speech, the references to America's role in the world were few and far between. Obama did say:

We will support democracy from Asia to Africa; from the Americas to the Middle East, because our interests and our conscience compel us to act on behalf of those who long for freedom.

So, how does America "support" democracy besides the obvious military interventions of recent years?

The US supports "civil service reform, including recruitment and training of professionals, and assistance to provide better government services," according to the State Dept., by funding programs for civil society oversight and assisting organizations that advocate for freedom of assembly, religious freedom, democratic governance and legal frameworks.

Elections and the Political Process

The US also funds programs to strengthen electoral institutions and support improved political processes, according to the State Dept report. The US urges "political liberalization" and "free and fair elections" by training election officials and providing support for NGOs to observe elections.

It also supports programs to prevent post-election violence and promote tolerance in reform.

"The United States advocates freedom of expression through media including broadcast, print, and online," says the State Dept. Some specific initiatives include encouraging lower penalties for libel, thorough investigations of attacks on journalists, the release of journalists and bloggers jailed for political reasons and safe internet access.

US programs, according to the State Dept., provide technical assistance to civilian and military courts, legal services and legislative reform. The US funds programs to train judges, police, prosecutors and defense attorneys.

The US funds "civil society projects to support the protection of human rights, including freedoms of speech, association and assembly, and rights of the child," says the State Dept.

Military training funded by the US includes human rights components, while the US also funds projects that promote international labor standards and prevent child labor.

The US supports organizations run by those with disabilities, according to the State Dept. It also encourages the implementation of the Convention on the Rights of Persons with Disabilities.

The US promotes women's issues through the US National Security Strategy, the State Department’s Quadrennial Diplomacy Review, and the Secretary’s March 12 Policy Guidance on Promoting Gender Equality, the State Dept says.