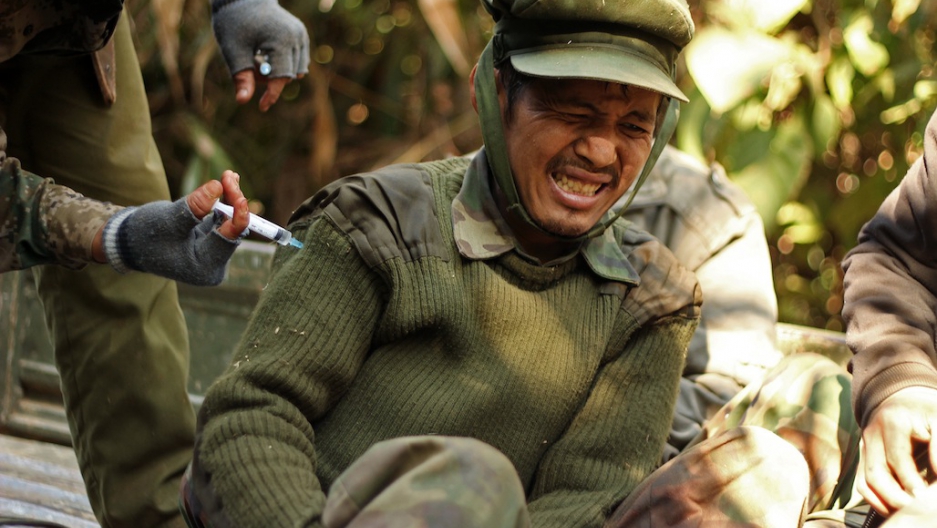 MYANMAR: An injured rebel Kachin Independence Army (KIA) soldier gets an injection from a medic on Hka Ya mountain in Kachin province on January 20, 2013. Kachin ethnic minority rebels in war-torn northern Myanmar accused the military of launching a fresh attack on January 20, just days after a ceasefire pledge by the country's reformist government.
Credit: STR
Share

It now appears that, as the United Nations Secretary-General publicly praised a weekend cease-fire agreement in Myanmar's war-torn north, the pledge was already broken by fresh attacks.

It's likely that the suspicious and conflict-weary guerrilla combatants — the largely Christianized Kachin Independence Army — never believed the cease-fire pledge was sincere in the first place.

The Kachin militants certainly didn't retreat from their positions. On the day fighting resumed, a Kachin news outlet reported that a pan-ethnic alliance in Myanmar was conflating government reports on the conflict to "Nazi-like propaganda." The mayor of the Kachin militants' core stronghold told another outlet, The Irrawaddy, that his town's residents were so accustomed to war that they no longer felt fear.

This is the deep well of cynicism and mistrust Myanmar's government — in particular its military — has to crawl out of when it attempts to hammer out its next ceasefire pledge. And this so-called ceasefire, which failed to last even one weekend, certainly won't help.

P.S. Extremely graphic images from the frontlines — a body tossed down a ravine, a man split open by munitions — have been published via The Irrawaddy in footage called "Kachin Conflict Scenes" on YouTube.