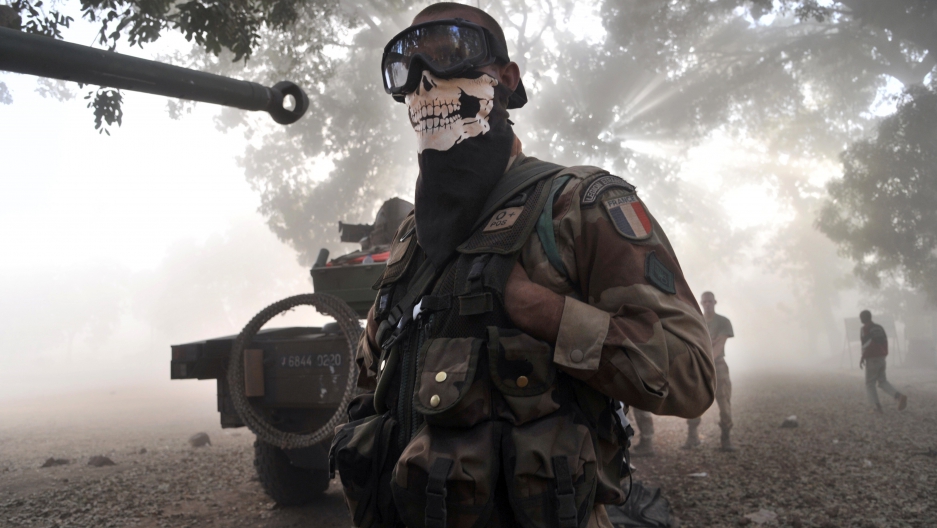 A French soldier wearing a skeleton mask stands next to a tank in a street in Niono, on January 20, 2013.
Credit: ISSOUF SANOGO
Share

France — a former colonial power in West Africa — is aiming for a "total reconquest" of Mali in its military offensive against militants there, French Defense Minister Jean-Yves Le Drian says.

The comment came as French troops consolidated gains in Mali's Islamist-held north as part of their advance on Al Qaeda-linked militants.

According to News.com.au, they are closing in on the mountainous region of Kidal, 930 miles from Bamako, near the border with Algeria.

The BBC cited Le Drian as saying that the town of Diabaly, formerly a militant stronghold, had not yet been retaken, however, "everything points to a favourable evolution of the situation in Diabaly in the coming hours".

The militants joined anti-government Tuareg separatists in but the two groups had since had a falling out, and the Islamists have since gained the upper hand.

Meanwhile, according to Le Drian, seven French citizens had been taken hostage by Islamist militants in Niger and Mali in recent years and were still alive.

However, Le Drian has since said on France 5 television:

"The goal is the total reconquest of Mali. We will not leave any pockets."

According to the BBC, his comments echo a similar sentiment by President Francois Hollande, who had said French troops would remain in the region long enough "to defeat terrorism".