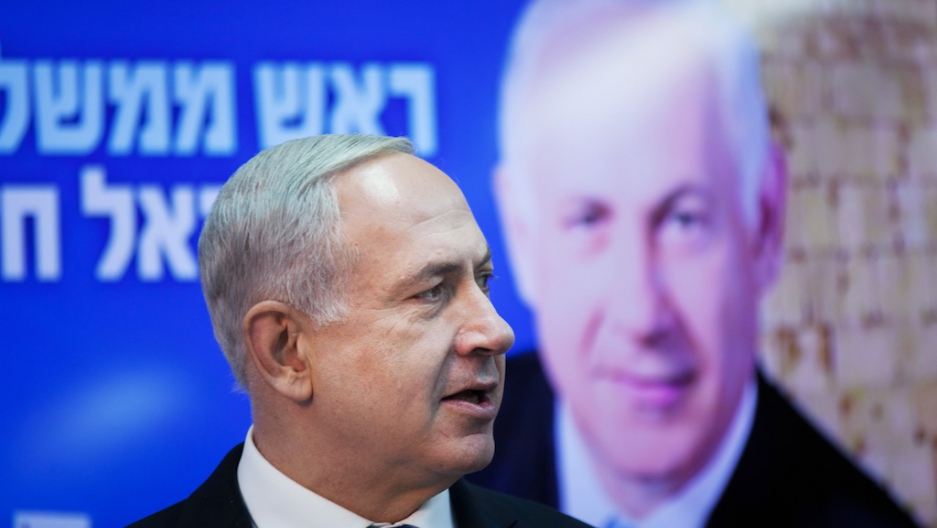 JERUSALEM — With Israel’s elections on Tuesday, it’s widely assumed Prime Minister Benjamin Netanyahu will get to keep his job.

That said, he and his allies are reeling from an onslaught of bad news.

The past month has shown a precipitous fall in support for Netanyahu’s Likud-Yisrael Beiteinu bloc. Friday's polls — the last to be published before the vote — show their support at its lowest point since elections were called in October. They predict the ticket could lose up to 10 seats in the Knesset, Israel's 120-member parliament.

But some of Netanyahu’s worst woes come down to Israel’s all-important special relationship. The United States, and some of its top political advisers, are dominating politics here — maybe even to a fault. Israeli politicians have relied on American strategists to hone their campaigns, but now analysts say the Americans could prove to be a thorn in the parties' side.

On Thursday night, Israeli TV Channel 10 reported Finkelstein had left the country and, by implication, the campaign. That sent Israelis tittering over the latest mishap to befall the prime minister.

Finkelstein protested it was a "lie." Likud struggled to save face, issuing an anemic rebuttal saying the "campaign remains on a schedule established months ago."

But the fact remained that the campaign's chief guru had decamped — four days before election day.

It's a twist most people never saw coming. Here was Netanyahu, who after graduating from the Massachusetts Institute of Technology and living for many years in the United States speaks accent-free English and is widely considered the most “American” politician in Israel. And there’s Finkelstein, whose hand in helping score victories for Republicans in the United States, and in the past for Bibi himself, earned him a reputation here as something of an electoral wizard.

Yet the American could now be tarnishing the Israeli’s ticket.

Finkelstein's failed forecast that the Republicans would trounce the Democrats in the last US presidential election, a broad range of Israeli media reported, probably played a part in Netanyahu’s move to all-but-openly support Mitt Romney’s candidacy.

The campaign’s also taking heat for a strategy criticized as “all security issues, all the time.” In recent months, Likud candidates have openly sniped about a Finkelstein policy that left them with no responses to social and economic concerns.

But Netanyahu’s American problem goes beyond the strategist.

Despite his US credentials, Pinkas says, Netanyahu seems "out of step" when it comes to gauging the American mood and the country’s influence on Israel's elections.

That supposed misreading comes at a crucial moment: For the first time in Israel's history, relations with the United States, and not the Israeli-Arab conflict, have dominated campaign messaging.

Former Prime Minister Ehud Olmert, once a colleague of Netanyahu, has led a brigade of voices claiming that Netanyahu's contentious relationship with US President Barack Obama is putting Israel's future at risk.

Speaking at a Haifa University forum last week, Olmert asked, "Who builds airplanes? Members of the Likud party who need to be shown flexed muscles, or the US president?”

Concessions Netanyahu has made to far right and ultra-orthodox religious parties here, analysts say, have alienated US Jews, most of whom adhere to the more liberal movements of Reform and Conservative Judaism.

In Israel, Netanyahu’s now being widely mocked after it emerged this weekend that the prime minister asked Chuck Norris and Donald Trump to produce videos endorsing his candidacy.

Another US campaign wizard, Democratic consultant Stanley Greenberg, has not fared much better working for Israeli Labor Party leader Shelley Yachimovich. Labor is now projected to win about 17 seats, down from 20 predicted in October.

Some observers think pairing American-style campaigners with Israeli politicians is a mismatch that simply won’t work.

"The advisers and the Americanization of Israeli politics over the past 15 years demonstrates that the Israeli political system is not apt for these kind of professional campaigners coming in,” said Gerald Steinberg, an American-born political science professor at Bar-Ilan University. “They don't really understand Israel and don't get the concerns swing voters here have."

Polls show between 15 percent and 25 percent of voters are undecided.

With such a vast spectrum of parties to choose from — and flagging enthusiasm for the front-runners — at least from an American standpoint it could be difficult to imagine how Israelis ever decide. In contrast to US bipartisanship, in Israel's diffuse parliamentary system at least 10 parties are likely to garner enough votes for representation.

"People like Finkelstein and Greenberg come in primarily to promote the potential heads of government, but Israelis know Netanyahu, and Yachimovich has been around long enough that she's not really a new face, so the campaign really is about staking out bits and pieces of territory. It is completely different from the American model of a clash of titans," Steinberg explained.

And now, Israelis are more drawn to smaller niche parties than ever, analysts say.

Naftali Bennett, an upstart and untested right-wing leader who seemingly surfaced two months ago out of nowhere, is projected to lead his party, HaBayit Hayehudi (Jewish Home), to be the third-largest political force in the country.

Even a small, previously unviable party such as Da'am, a joint Jewish-Arab socialist group, is seen now as having a chance.

"There's not a lot of enthusiasm for Netanyahu," says Steinberg. "He's sort of a default choice. In most democracies there is some restlessness, and he's been around for 20 years. There's a natural erosion."

Israel's current predicament, in which an unpopular prime minister is likely to be re-elected, could be a recipe for an unstable and short-lasting next term. Left-wing parties that look poised to increase their number of Knesset seats on Tuesday, such as the nominally communist Hadash and the center-left Meretz, are already prepping for the next elections.

Are the well-paid American consultants working for naught?

"I don't think they have much influence," said Gadi Taub, a professor of public policy and communications at the Hebrew University of Jerusalem. "The Israeli public is made up of inveterate news junkies, and the illusion that the strategic advisers will be decisive is almost ridiculous."

"In the United States, the disagreements are simply a matter of degree on different policies," Taub added. "Not so in Israel, where we are still asking ourselves what this country is, who and what we are. The dangers here are clear and present. So I don't think strategic advisers can make a real difference."

More from GlobalPost: Your guide to the Israeli elections