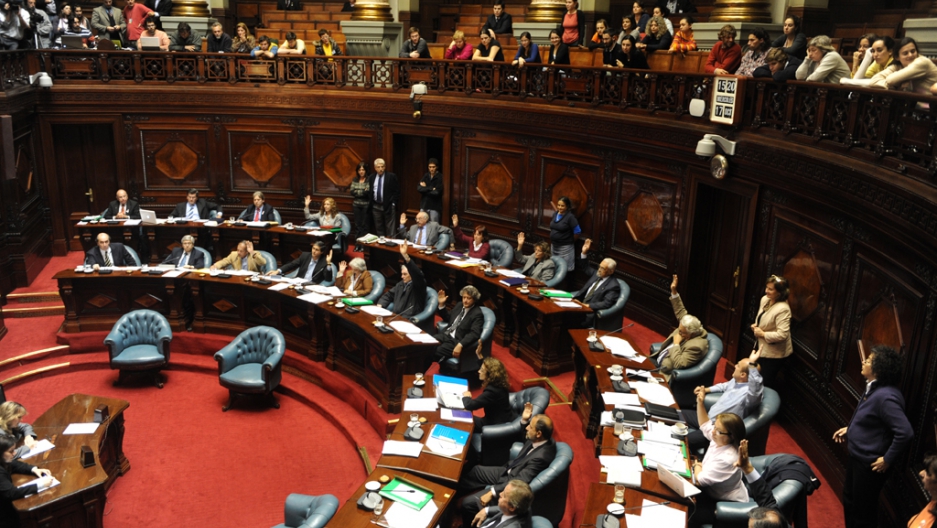 The Uruguayan Senate passes the law legalizing abortion, in Montevideo, on Oct. 17, 2012. Uruguay became only the second country in mostly Catholic South America to legalize abortion when the Senate approved the bill with a vote of 17 to 14.
Credit: Miguel Rojo
Share

This month is the 40th anniversary of one of the most important legal decisions of our time: Roe v. Wade.

This legislative victory changed the course of history for women not only in the United States, but also throughout the world. It provided a framework for sexual and reproductive rights used by advocates from San Francisco to Santiago, and the past year yielded significant progress on abortion rights in Latin America.

For decades, advocates in Latin America have come together to demand that governments decriminalize abortion, provide access to safe and legal abortion services, and bring an end to the stigma faced by women who have had an abortion.

The region has some of the most restrictive laws against abortion in the world. Abortion is not permitted for any reason in seven of Latin America's 34 countries and territories, and it is allowed only to save the woman’s life in eight others. Only six countries and territories permit abortion without restriction, accounting for less than 5 percent of women aged 15 to 44 years old.

These policies have major implications for the health and well being of Latin American women and families. While policymakers may be under the impression that restrictive laws help curb abortion rates, research shows the opposite is true. In places where abortion is illegal or heavily restricted, an unwanted pregnancy leaves women with two options: seek out a clandestine abortion that could be unsafe or continue a pregnancy that was neither chosen nor planned for. Both options have detrimental economic, social and health consequences.

According to the World Health Organization, 95 percent of abortions in Latin America are unsafe and one in eight maternal deaths in the region result from unsafe abortions. Nearly half of sexually active young women in Latin America and the Caribbean have an unmet need for contraception that would enable them to prevent unintended pregnancy.

Women who are poor and live in rural areas are disproportionately affected. One tactic taken by civil society advocates to address these critical issues has been to make obtaining abortion rights a priority, but this doesn’t always happen.

In the last weeks of 2012, the Inter-American Court of Human Rights overturned a ban on in-vitro fertilization in Costa Rica, saying human embryos and fetuses could not be granted protection under the American Convention on Human Rights. In-vitro fertilization has not been permitted in Costa Rica since the country’s legal system considered a human embryo to be a person from the moment of conception and the procedure risks the loss of human embryos.

This decision could have consequences throughout Latin America not only for assisted reproductive technology, but also abortion and contraceptive rights in countries where restrictions are based on the protection of embryos and fetuses.

On Oct. 17, a historic victory in Uruguay made it the second country in Latin America to allow unrestricted first-trimester abortion. After more than a decade of sustained sexual and reproductive rights advocacy, Uruguay’s Chamber of Deputies barely passed a bill legalizing abortion, with 50 to 49. Less than a month later, the Senate approved the bill with a vote of 17 to 14.

To be clear, this ruling does not decriminalize all abortions in Uruguay; it simply legalizes some abortions that occur within the first 12 weeks of pregnancy. Much remains unknown about how the changes to the law will play out in health care settings, so advocates remain steadfast in pushing for clear and strong guidance regarding service delivery. At the same time, they must also continue to deal with opposition from religious leaders who are mobilizing against the ruling.

These legislative victories are a part of a greater changing tide in Latin America. In the last five years several monumental shifts have occurred in the region, including the legalization of abortion in Mexico City and lifting the ban on abortion in Brazil in cases of anencephaly.

In Chile, where abortion remains completely illegal in all cases, women are risking imprisonment to run a safe abortion hotline that provides women with information about misoprostol, a drug developed to treat ulcers that can also induce miscarriage. Four other Latin American countries run similar hotlines: Argentina, Ecuador, Peru, and Venezuela.

It is critical to continue to reduce women’s need to resort to dangerous procedures, to provide those who have unsafe abortions with post-abortion care, to reduce the high rates of maternal mortality due to unsafe abortions and to promote comprehensive sexuality education and access to contraceptives to prevent unintended pregnancy.

Empowering individuals and families with access to the information and services they need to make informed, autonomous decisions about their sexual and reproductive health contributes to the creation of more sustainable, secure and just communities.

As America observes four decades of the right to safe and legal abortion, access to this fundamental right remains elusive for most Latin American women. Yet, recent achievements lead me to believe we will see more successes in the region during 2013.

Mandy Van Deven is a writer, advocate, and online media strategist. Her work exploring contemporary feminisms, global activism, and sexuality has been published in Salon, AlterNet, GlobalPost, The Guardian, and Marie Claire.