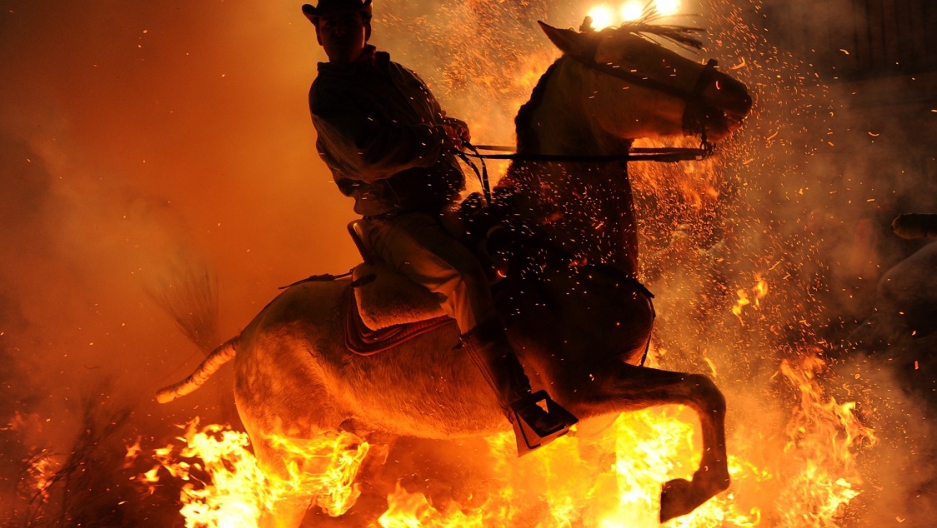 A man rides a horse through a bonfire on January 16, 2012 in the small village of San Bartolome de Pinares, Spain.
Credit: Jasper Juinen
Share

You can lead a horse to water... and then you can make it jump through fire.

That's what people have done for hundreds of years each January in the village of San Bartolomé de Pinares, in central Spain.

To celebrate the feast day of St Anthony, the patron saint of animals, daring riders jump their steeds through a string of bonfires lining the narrow streets. Tradition has it that the smoke cleanses the horses and strengthens them for the coming year.

"It is really a pagan tradition," San Bartolomé native Anibal Martinez told Agence France-Presse. "With the smoke and the fire the animals are blessed so they will be purified for the whole year and won't get hurt or ill."

The horses are doused with water before the jump to prevent their coats from singeing.

Riders say the animals are used to it and do not suffer, but animal rights activists have long complained that the practice is cruel, according to Al Jazeera.

Yet the villagers of San Bartolomé remain fiercely attached to the tradition, which is said to have begun during a time of sickness around 500 years ago.

"The tradition goes back to the Middle Ages and nothing has ever happened. It is a feeling you have to live through. If you don't ride, you don't live it."