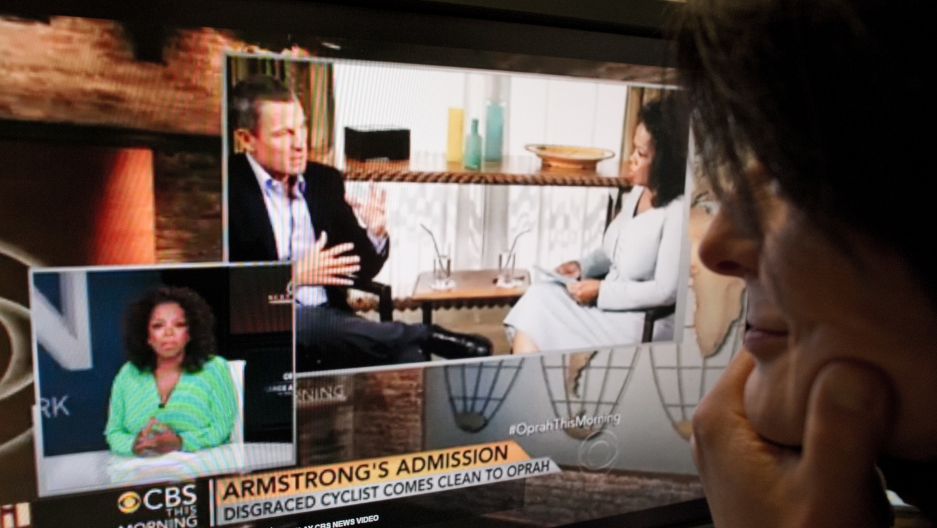 Lance Armstrong has admitted to Oprah Winfrey that he took banned substances during all seven of his Tour de France victories.

Armstrong's admission came during a much-anticipated interview with the talk show host, which went to air Thursday night.

Major US news outlets, including the LA Times, Wall Street Journal and USA Today were running live blogs of the interview.

Armstrong — who was stripped of his last major title overnight, with the International Olympic Committee sending him a letter asking him to return his bronze medal from the 2000 Sydney Olympics — admitted he took EPO, used blood doping and took human growth hormone and testosterone throughout his career.

He said his repeated denials of doping were "one big lie":

"All the fault and all the blame here falls on me. I didn't invent the [doping] culture, but I didn't do anything to stop the culture."

However, while admitting to doping to achieve his Tour de France wins, he denied any doping after 2005, saying his performances in the race in 2009 and 2010 were totally clean.

He also adamantly denied forcing others on his team to dope.

ESPN published a number of Armstrong's answers to Winfrey's questions on its website, including:

Oprah: Did you ever take banned substances to enhance your cycling performance?

Oprah: Was one of those banned substances EPO?

More from GlobalPost: What is EPO? Lance Armstrong admits to Oprah on air that he used it

Oprah: Did you ever blood dope or use blood transfusions to enhance your cycling performance?

Oprah: Did you ever use any other banned substance like testosterone, cortisone or human growth hormone?

Oprah: In all seven of your Tour de France victories, did you ever take banned substances or blood dope?

Oprah: In your opinion, was it humanly possible to win the Tour de France without doping? Seven times in a row?

Armstrong: Not in my opinion.

Oprah: For 13 years you didn't just deny it, you brazenly and defiantly denied everything you just admitted just now. So why now admit it?

Armstrong: That is the best question. It's the most logical question. ... I don't know that I have a great answer. I will start my answer by saying that this is too late. It's too late for probably most people, and that's my fault. I viewed this situation as one big lie that I repeated a lot of times, and as you said, it wasn't as if I just said no and I moved off it.

On the issue of EPO, Armstrong said:

"My cocktail, so to speak, was EPO, but not a lot, transfusions and testosterone. Which in a weird way I justified because of my history of testicular cancer.... Surely I’m running low."

The interview, broadcast on the Oprah Winfrey Network, was conducted Monday in Austin, Texas.