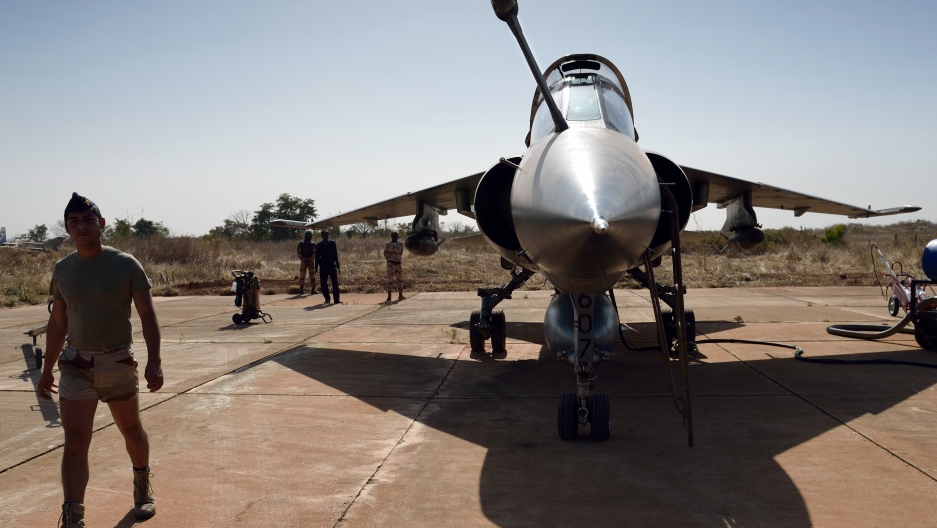 A French soldier near a Mirage fighter jet near Bamako, Mali. Islamist groups have warned France has "opened the doors of hell."
Credit: Eric Feferberg
Share

BRUSSELS, Belgium — Any hopes that France's war in Mali would be a straightforward affair evaporated like rain in the desert Wednesday, when the Islamist warriors of the "Signed-in-Blood Battalion" shot up an Algerian natural gas plant and took dozens of foreigners hostage.

The threat of attacks against French and international interests by the multifarious jihadist groups lurking across North and West Africa is just one of the risks President Francois Hollande took on when he ordered the French land and air offensive against the insurgents in Mali last week.

The Islamists have threatened terrorist outrages in France itself and French military officers acknowledge they face a tough fight against the well-armed desert fighters who have held much of northern Mali for almost a year. The fighting could also spread to the country’s neighbors.

All of which means potential political trouble for Hollande.

Many criticize France's post-colonial role as a military gendarme defending economic interests and friendly — if often dictatorial — regimes across its former African empire. The critics have included Hollande himself.

Since launching the Mali operation last week, however, the supposedly mild-mannered president has surprised many in France with language reminiscent of George W. Bush's war-on-terror rhetoric.

"You're asking me what we'll do with these terrorists if we find them,” he told a news conference in Dubai this week. “Destroy them, take the prisoner if possible and make sure they can no longer darken the future.”

"We have just one enemy,” he added, “the terrorism that threatens not just Mali, but the whole of Africa and undoubtedly Europe."

Hollande has received broad international backing so far, including a unanimous vote of support from the United Nations Security Council. Inside France, he’s supported both within his own party and from the main center-right opposition.

"When France is at war, and this is a war, not a little policing operation, we must all be united behind our soldiers," Henri Guaino, a prominent lawmaker with the main conservative opposition party told the broadcaster RTL.

A poll Wednesday showed 75 percent of the French support the military intervention. That compares to 66 percent that supported military action in Libya in 2011, and 55 percent that backed France’s joining the international mission in Afghanistan in 2001, according to the newspaper Le Parisien, which published the poll.

Matters could quickly change if French troops become dragged into a long and costly conflict that spreads significantly beyond Mali's borders.

"If a Mali quagmire emerges with echoes of Afghanistan, it would be very bad for Francois Hollande," says Thomas Klau, who heads the Paris office for the European Council on Foreign Relations.

"There is cross-party support, but the moment that it goes badly from a military or political point of view, it could turn into a significant problem for Hollande, undermining his political credibility at home and abroad.”

Some critical voices are already emerging.

"I'm worried by this unanimous enthusiasm for war, this apparent haste, this deja vu of the 'war on terror.' This is not France," argued Dominique de Villepin, who, as French foreign minister was an outspoken critic of the US invasion of Iraq in 2003.

"Let's draw the lessons of a decade of lost wars in Afghanistan, Iraq, Libya," he wrote in the weekly Le Journal du Dimanche.

Despite the uncertainty over the outcome of the French operation, the risks of inaction could have been greater for Hollande.

The Islamists' latest offensive and their capture of the town of Konna on Jan. 10 was a direct threat to the Malian capital Bamako — home to most of the 6,000 French citizens living in Mali.

The capital’s fall would have given the Al Qaeda-linked insurgents a firm base from which to spread their influence around the region. Potential targets include oil-rich Nigeria, which is already battling violent Islamists in its northern regions; Niger, the world's fourth-largest uranium producer and a vital supplier to France's nuclear industry; and Algeria, a short sea journey to Europe's south coast.

Aside from the enhanced terrorism risk, a jihadist state in Mali would risk reversing years of efforts building stability and economic progress in the region, says Paul Melly, an expert on francophone Africa at London's Chatham House think-tank.

"If the jihadists break through into southern Mali — demonstrating that in the space of 12 months an entire state could be effectively wrecked by small bands of largely foreign extremists — this would be a devastating reverse for West Africa as a whole," Melly wrote Wednesday.

"The political development, human rights gains, economic growth and investment confidence of recent years would have been placed in jeopardy. The consequences would be felt in every country from Senegal to Nigeria."

Although Timbuktu — one of Mali’s Islamist-held cities — may be an international byword for isolation, the country isn’t so remote for many French. Forty-five thousand Malians live in France, while the French made up the largest group among the 250,000 foreign visitors to Mali in 2007, before Islamist hostage-taking wrecked a tourist industry worth $240,000 a year.

Malian musicians such as Salif Keita and Amadou & Mariam fill concert halls in France, where reports that the Islamists have banned music and destroyed UNESCO-rated world heritage sites have provoked widespread consternation.

Other European countries are also aware of what's at stake in Mali. Although none has offered to send combat troops, several are helping with transport planes and other logistical and intelligence support. The European Union agreed on Thursday to send a 450-strong military mission to train Malian troops fighting alongside the French.

"It is in the European interest for the jihadis and terrorists not to get a hold on the whole of Mali," Dutch Foreign Minister Frans Timmermans said. "I'm in full support of the French action and we will see what needs to be done to make sure that it is successful."

The EU is increasing aid to refugees who have fled the Islamists or been displaced by the fighting. The Europeans are also planning to step up financial assistance and otherwise reinforce Mali's fragile civilian authorities.

That may prove as important as the military action in determining success or failure of Hollande's war in the longterm.