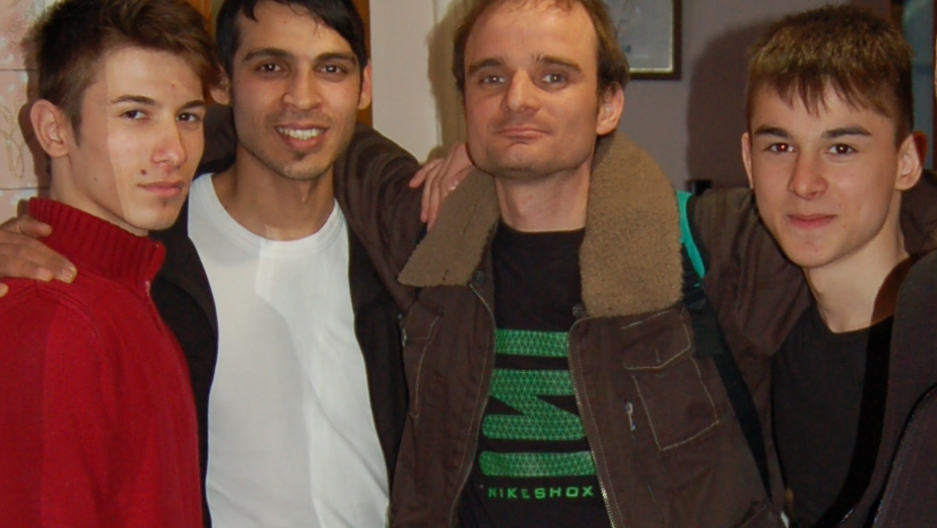 Editor's note: Following the Christmas Day execution of Romania’s long-time communist dictator Nicolae Ceausescu in 1989, the outside world first saw images of tens of thousands of abandoned children living in cramped, filthy institutions across the country.

Ceausescu’s policies — including outlawing abortion and birth control and dictating that every woman bear a minimum of five children — had created a generation of children that were cared for by the state.

Many didn’t survive. But nearly a quarter of a century later, those who did are now young adults.

This is the second of a two-part series that takes a look at two young men who lead very different lives as they navigate society on the outside today.

BUCHAREST, Romania — Eight years ago, Gabriel Ciobotaru didn’t know how he would avoid living on the streets, let alone find an apartment, land a job and otherwise build a life.

Living in one of Romania’s notorious orphanages, he was given virtually no guidance about how to survive when it came time to leave.

“They don’t prepare you for life,” says Ciobotaru, who was 26 when he was first sent out on his own. Now 34, his thinning, graying hair and slight frame make him appear much older than his years.

“That’s the problem for 2,000 young people who leave every year,” he adds. “They aren’t able to maintain a job, they don’t know how to cook… so they can’t create a family.”

More than two decades after the fall of communism exposed shocking conditions for the country’s abandoned children living in state institutions, life for many has improved. But the state still provides no formalized life-training program or ongoing support for the estimated 70,000 children who fall under the care of the Department of Child Protection, let alone the tens of thousands more believed to live on the streets.

Laurentiu Ierusalim grew up in an orphanage after he was abandoned in a hospital at birth. Now 26, he says he was told he’d be discharged only the day before he had to leave.

“I spent the entire first day standing in front of the orphanage,” he says. “I didn’t know what to do, so I slept in a playground across the street.”

Ierusalim stayed homeless. Bundled in a warm sweatshirt, his dark eyes cast downward, he describes spending three years moving from city to city, knocking on doors to ask for work, food and shelter.

A priest at an Orthodox church helped find families to take him in — three months here, a month there. He finally secured a job as a grocery store clerk two months ago.

“They help them with what we call ‘gathering independent life skills’ from the moment [orphans] enter the special protection system,” she says.

But many say “life training” and other help for integrating into society greatly varies if it’s available at all.

Most discharged orphans are thrust into society provided with less than $140 as soon as they legally become adults at age 18. There are no national job or housing assistance programs.

Although Cuculas says companies contact her ministry to request workers whose skills fit their needs, many orphans who turn down a first offer say they get no further help from the state.

Many, like Ierusalim, face the terrible hazards of living alone on the streets. “I was traveling with a group that was into drugs, but I left them,” he says. “I slept in random places on the street… I prayed to God for help. I never gave up.”

A lucky few who are able to attend college are allowed to continue living in institutions until age 26.

But only a small handful earn the top marks on their entrance exams that enable Romanians to attend university free.

Among them, Ciobotaru was orphaned at age 10 when his mother died during childbirth. His father, a pilot, had died in a plane crash when Ciobotaru was an infant.

Without his parents, he relied on his own initiative and a bond with an American family he’d never met.

During his teens, Carolyn and Bruce Coughlin of Massachusetts began sponsoring him through the Boston-based charity Romanian Children’s Relief.

Ciobotaru says Carolyn’s encouragement and interest made a great difference. “I knew someone was thinking about me,” he says. “She was like an angel, very glad for every achievement I had. She used to tell me I was an amazing child.”

The Coughlins became close to Ciobotaru through monthly letters. They first met after 15 years of correspondence when he organized a choir trip to the United States for a children’s singing group in 2010.

“They’re my family,” he says. “Every child in this world can have a family no matter the distance.”

He says he was lucky to have been orphaned in Bucharest because more private aid is available in the capital than in the countryside, together with occasional temporary jobs and short-term housing.

But Ciobotaru was never your average orphan. He says he found ways to cope from the start, including minimizing frequent bullying by helping others.

“Ironing clothes for the younger kids, for example, and helping in the kitchen,” he says. “The adults in charge began trusting me. That protected me.”

Ciobotaru managed to pick up some household skills and win the attention of the orphanage director and other key figures.

As a teenager, he came up with plans to raise money for children to hold monthly birthday celebrations, attend camps and go on fieldtrips.

Later, he expanded his mission to help others by applying for a social work degree at a Bucharest university after earning the highest possible score on an entrance exam.

After he won a contest to speak at a conference in Norway, he funded his flight there through UNICEF. He was later recruited to speak at a similar program in India.

He now works with at-risk youth for the Department of Child Protection.

In 2011, Ciobotaru founded Sansa Ta, “Your Chance,” a foundation that raises money for the homeless and collects donations for needy children.

It also plans to build an apartment building for orphans entering society.

Twelve have already been selected to help with construction on land promised by the government in Bufeta, just outside Bucharest. Their labor will serve as security deposits and initial rent payments on studio apartments.

“I was different than other kids because I liked to get involved,” he says of his childhood. “But like other orphans, I knew I’d have to go out into a new world where life isn’t easy.”