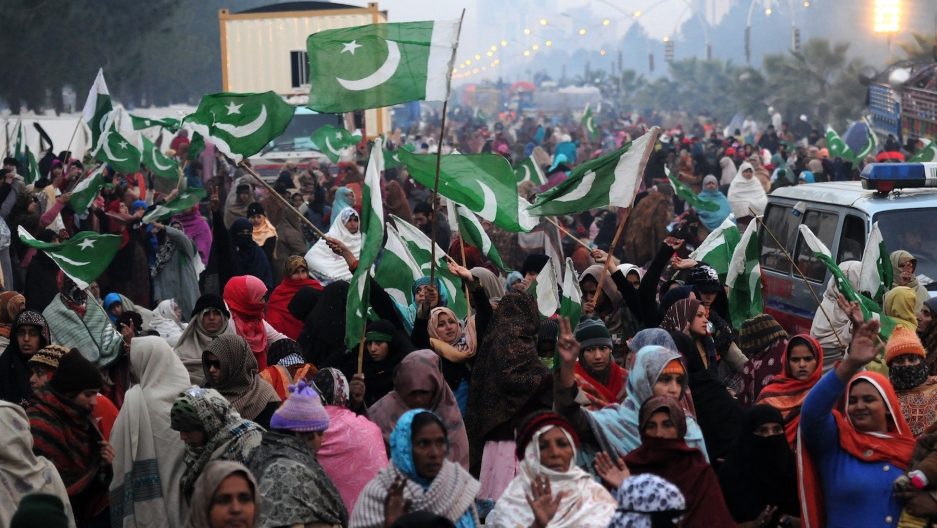 Supporters of Pakistani cleric Tahir-ul Qadri wave flags on the third day of the protest rally in Islamabad on January 16, 2013. Pakistan's opposition parties on Wednesday backed the government against any "extra-constitutional changes," and the government announced it will hold fresh elections on May 15, likely staving off any threat of a soft coup engineered by the military.
Share

Pakistan's opposition parties agreed to back the government against any “extra-constitutional changes” to prevent the country from holding elections this spring and the government announced Pakistan will go to the polls on May 15 – developments that will likely prevent the army from engineering a “soft coup,” if that was indeed ever on the cards.

“I cannot see a coup occurring. Too many forces against it,” said Shuja Nawaz, director of the South Asia Center of the Atlantic Council.

“The PM is dispensable. As was [Syed Yousuf Raza] Gilani before him,” said Nawaz, referring to the recent Supreme Court order for the arrest of Prime Minister Raja Pervez Ashraf on corruption charges. “He does not have a power base of his own on the national stage.”

The arrest order has put added weight behind the ongoing protests led by Tahir-ul-Qadri, an Islamic cleric who has mobilized tens of thousands of demonstrators since he returned to Pakistan from Canada to mount an anti-corruption movement. Qadri has demanded that the government surrender power. He has asked for the Election Commission to be disbanded. And he has called for a caretaker government be formed with the consultation of the judiciary and the military – which has prompted speculation that he is working on behalf of army chief Ashfaq Parvez Kayani to engineer a soft coup. (See The News here).

By announcing elections, Pakistani President Asaf Ali Zardari has essentially stolen his thunder. The May 15 poll date means that the government will in any case be disbanded in less than two months time, which means, as the editors of the Hindustan Times put it, Qadri's “call for the overthrow of a government sounds absurd.”

“Americans need to understand that there is a fairly wide-ranging consensus on continuation of the democratic process within the political class in Pakistan,” said Umair Javed, a political analyst and researcher based in Lahore.

“The biggest opposition party wants elections to be held on time and that's almost unprecedented given the country's political history. The court, especially the chief justice of pakistan, raises the odd pro-democracy slogan every now and then as well. The military has a much tougher time getting more than just a foot in the door as far as the government is concerned. Musharraf's first coup had the blessings of the court and of the opposition parties, so in many ways it was easier to carry out. The structural context this time around is quite different.”

If Zardari manages to survive to preside over a democratic transition, he will make history, despite a term in office that only the most charitable Pakistanis characterize as lackluster. Even if he hasn't been able to make any significant strides in reducing corruption, breaking the stranglehold of the military over Pakistan's foreign affairs or addressing the problem of terrorism (whether internal or directed at India), if he makes it through the election he will be the first Pakistani leader ever to do so. And even if that means the inevitable selection of yet another kleptocrat, it will mark a significant step forward for the world's most troubled democracy.

The biggest threat was eliminated when he gained the support of Pakistan's other parties, suggests The Hindu.

“Pakistan’s democratic forces heaved a collective sigh of relief on Wednesday evening when politicians – cutting across party lines – held their ground against what is widely perceived as another assault on democracy,” writes Anita Joshua.

“With Dr. Qadri pitching for an interim government decided by 'all stakeholders' including the judiciary and military, the fear was that some political parties would fall for the bait of a seat at the high table and derail the democratic project in the process.”

“The spectre of the 1990s when the establishment played on the insecurities of the two main political parties — the Pakistan Peoples Party and Pakistan Muslim League (PML) of the Sharifs — to destablise each other receded and democratic forces could be seen congratulating each other to the extent of wanting to dedicate January 16 to democracy and call it Democracy Day.

"Now with the opposition on course, the PPP-led ruling coalition has to bolt its own stables as two of its partners — the Muttahida Qaumi Movement (MQM) and PML (Q) — have been openly hobnobbing with Dr. Qadri. The MQM is, in fact, providing logistic support to the thousands picketing outside Parliament House.”

Javed suggests that the fractures in the coalition may not run so deep.

“[Zardari] enjoys the support of the coalition partners (to varying degrees), and given the pressers in the evening, the major opposition parties aren't really seeking his resignation,” said Javed.

“His major concern would be to ensure that the prime minister doesn't get convicted, which would be rather troublesome for his party's plan of finishing its tenure in government. Contingently, he needs assurances of support from the coalition partners that if the court convicts the PM and disqualifies him, the party would need the numbers to get another prime minister elected (for the remaining 5 or 6 weeks left).”