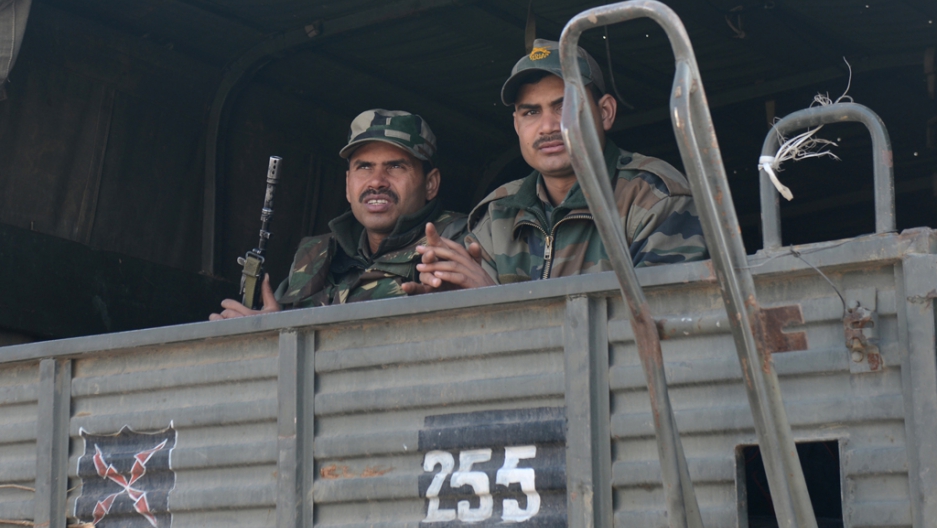 Indian soldiers ride in a military truck as they move towards a camp in Jammu on January 10, 2013. The beheading of an Indian soldier may have sparked a war of words between Delhi and Islamabad but the two nuclear rivals are both determined to prevent it from wrecking a fragile peace process. Two Indian soldiers died after a firefight erupted in disputed Kashmir on Tuesday as a patrol moving in fog discovered Pakistani troops about 500 metres (yards) inside Indian territory, according to the Indian army.
Credit: TAUSEEF MUSTAFA
Share

Tensions between India and Pakistan over the Kashmir border appeared to have calmed down Thursday, as a cease-fire between the two nations went into effect.

The truce was called Wednesday after Indian and Pakistani military commanders conversed on the telephone and came to an "understanding," writes the Washington Post.

Since the tensions began on Jan. 6, two Indian soldiers and three Pakistani soldiers have died in violent altercations between the two nations at the border, the worst such incidents since a cease-fire took effect in 2003.

"No fresh incidents of firing or violation of the cease-fire agreement have been reported from the Line of Control," said Rajesh Kalia, spokesman for the Indian army's Northern Command, to AFP.

Neither Pakistan or India have admitted culpability in the soldier deaths thus far, and both countries have taken a hard-line approach on the matter toward one another.

Read more from GlobalPost: India-Pakistan: Tensions at the border (PHOTOS)

Pakistani Foreign Minister Hina Rabbani Khar said she was "open to a discussion" level with Indian officials over the border incursions, writes the Voice of America — although earlier in the week, Khar had accused India of "warmongering."

New Delhi's delay in accepting Kar's offer to sit down with her Indian counterpart suggests India may not be ready to bury the hatchet altogether, says GlobalPost's senior correspondent in India, Jason Overdorf.

"India has no real strategy for dealing with its nuclear rival — even if Pakistan is indeed providing covering fire to help terrorists cross the Line of Control into India-administered Kashmir," Overdorf said.

"Rattle the saber too loudly, and without restraint, and the world may again begin to see India and Pakistan as flip sides of the same coin. Allow Islamabad to skate altogether, and lose the support of the Indian public, as well as the upper hand in future negotiations," he added.

On Thursday, Indian President Manmohan Singh stated he was taking the foreign minister level talks with Pakistan under consideration, according to the Times of India.