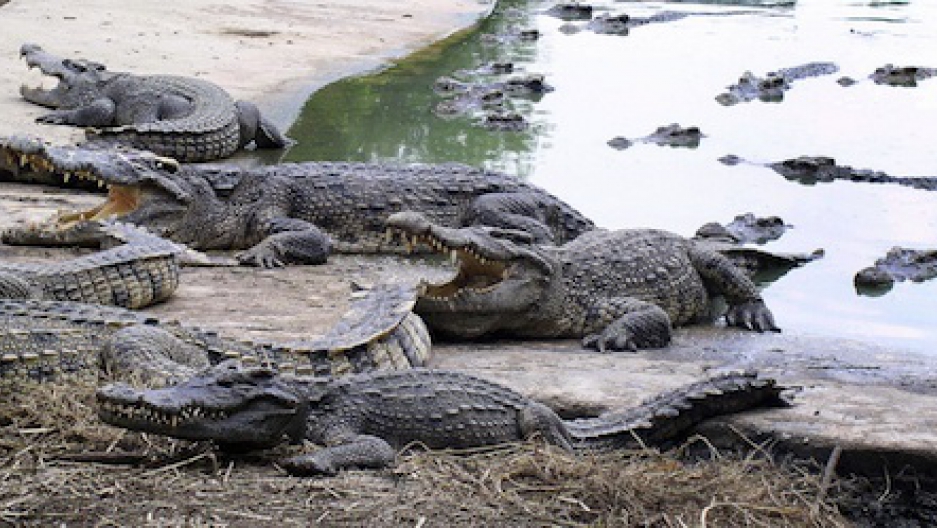 Crocodiles at a zoo on the outskirts of Bangkok in 2008.
Credit: PAUL DAILING
Share

Scores of crocodiles perished in a Shenzen, China zoo recently, after suffering a barrage of trash and projectiles from callous visitors.

The crocodiles, which were hibernating during the winter months and as a result did not move often, appear to have been pelted with random objects because visitors wondered if they were "alive" or not, wrote TheNanfang.com, which translated portions of a Shenzen Evening News story.

Zookeepers eventually came to clean out the trash that had built up in the pool, and then discovered that only two of the 11 crocodiles that were resident in the exhibit were still alive.

The Shenzen Evening News reported the reptiles resided at the Rural Grand View Garden, located in the Guangming New Zone of Shenzen.

Staff claimed that they, for inexplicable reasons, found it difficult to stop the tourists from pelting the animals with garbage, wrote TheNanfang.com.

Such inattention on the part of zoo staff was likely behind an unrelated incident earlier this week, in which a number of Hangzhou Zoo visitors were photographed tossing snowballs at a pair of lions, wrote the Huffington Post.

The lion pair, which can be seen growing more and more irate as the photos progress (entirely understandably), weren't harmed by the snow — but their shoddy treatment by zoo visitors has been seen by some as indicative of the public's attitude toward animal welfare.

Why would anyone in their right mind pelt a lion w/ snowballs? Do they not realize a lion will eat their face off?

Lions hit with snowballs at zoo in China. We would like to see them try to do that in the lion enclosure! asiancemagazine.com/news/2013/01/1… via @asiance

"Although snowballs can't hurt large animals like lions, the behavior upset us nonetheless," animal breeder Zhu Yan said to Xinhua of the incident.

"Our animals should be treated fairly. We hope our visitors will use some self-discipline and be nicer to them."

That sentiment has been slow to catch on in China, says GlobalPost's senior correspondent in Hong Kong, Benjamin Carlson.

"For cultural and economic reasons, animal rights awareness is one of those areas where China is still lagging the developed world," Carlson said. "But the backlash we've seen on Weibo [China's version of Twitter] over the dead crocodiles, and the uproar this week over the tourists who threw snowballs at lions, show that that's changing rapidly. Environmentalists are gaining strength in society."

He added that urban pet owners are also speaking out.

Carlson said, "Chinese dog lovers stopped a truck that was carrying dogs to be slaughtered for meat, eventually saving over 400 of them."