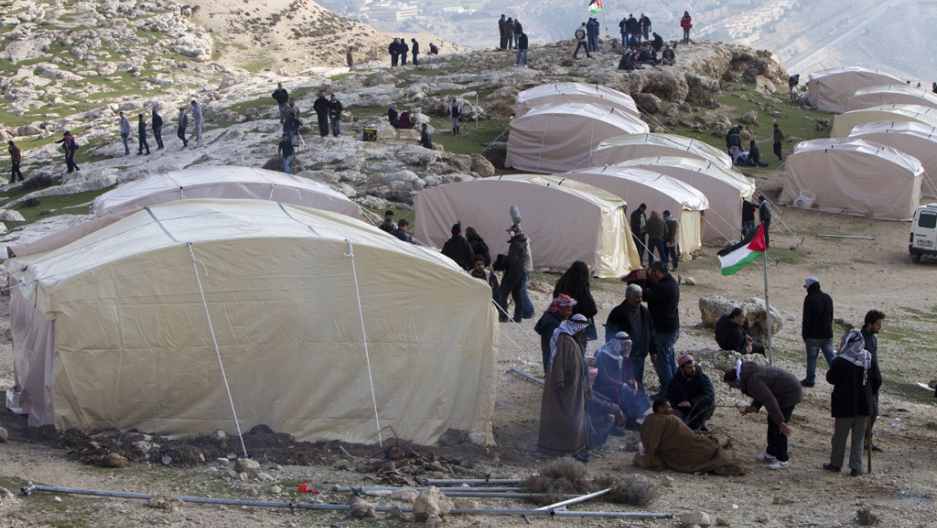 Palestinian activists set up an "outpost," named Bab al-Shams ("gate of the sun"), in the E1 area of the Israeli-occupied West Bank on Jan. 11, 2013. Israeli police have evicted dozens of Palestinian protestors from the camp near the Jewish settlement of Ma'ale Adumim.
Credit: Ahmad Gharabli
Share

RAMALLAH, West Bank — On Friday Jan. 11, Palestinian activists set up some 25 tents, including a clinic, in the E1 area of the West Bank, and declared the establishment of a new village. They named it Bab Al-Shams, or “Gate of the Sun.” The move signaled a new period of activism against the Israeli occupation.

In November, the United Nations General Assembly overwhelmingly voted to upgrade Palestine to an “observer state,” and thereby recognized its right to statehood in the West Bank and the Gaza Strip with East Jerusalem as its capital.

Infuriated, Israeli Prime Minister Benyamin Netanyahu vowed to expand settlements, and it was soon after his announcement that the E1 Area was chosen. This strategic decision was widely understood to be the final nail in the coffin of the two-state solution.

E1 is situated in the vast rolling hills between Jerusalem and Ma’ale Adumim, the largest Jewish settlement in the West Bank. While all settlements on the Palestinian side of the Green Line are considered illegal under international law, E1 is particularly significant.

By building some 3,000 homes there, Israel will dissect the West Bank, preventing the establishment of a geographically contiguous Palestinian state. The new Jewish settlement will encircle East Jerusalem, the intended capital of the new Palestinian state.

Outraged European governments immediately summoned their Israeli envoys. The British Foreign Office deemed the decision “deplorable,” and Spain, France, Sweden and others followed suit. Meanwhile, the usual groans of disapproval, unconvincingly punctuated by statements of “deep concern,” emanated from Washington, where Secretary of State Hillary Clinton said the decision was contrary to “the cause of peace.”

Other than elevated tones of dissatisfaction, however, it quickly became clear that the Israeli government would be permitted to move forward unhindered. But Palestinian activists had something else in mind.

West Bank settlers often build “outposts,” or settlements even considered illegal by the Israel government, on private Palestinian land. Doing so involves the theft or destruction of agricultural land, extremely valuable in an already emaciated Palestinian economy that essentially functions as Israel’s captive market. It sometimes takes the Israeli government years to evacuate these illegal outposts, though more often they are retroactively legalized.

Palestinian activists were mirroring these very settler tactics when they staked tents in the E1 Area and declared its name Bab Al-Shams. The salient difference is that the land in question is private Palestinian land being “settled” by Palestinians who had the permission of its legal owner.

By the time I arrived to Bab Al-Shams on a recent afternoon, some 400 people were present, including Palestinian, Israeli and international activists along with swarms of media. More than 250 had already registered to spend the night at the encampment, one organizer told me.

Buses — filled with activists that had been organized by the Popular Struggle Coordination Committee — crossed several on-the-fly Israeli checkpoints to get to the outlying area because E1 had already been declared a closed military zone by an angry Netanyahu administration. The drivers made impromptu stops on the side of the highway, where passengers — lugging packages of food and supplies — swiftly exited and dashed through the hills at the behest of Israeli soldiers.

“The owner of the land has a court order that said our presence here is legal, and that the owner has six days to protest the confiscation of his property,” an activist told me. “But the military came again yesterday afternoon and said that the court order did not say that the presence of people was permitted — only tents — and that we needed to leave.”

Within a few hours, entrances to every surrounding village were barricaded by the Israeli military and no one else was able to enter, including several Palestinian Authority officials who said they were sent back to Ramallah after being harassed at a nearby checkpoint. Around 3 a.m., some 500 soldiers and police stormed the camp.

“All we saw were bright green lights, and then the soldiers emerged from the dark,” one photojournalist told me. “Before we could realize what was happening, we were being pushed towards the highway while our Palestinian partners were being beaten, handcuffed and arrested.”

Unlike their Jewish settler counterparts, it did not take the Israeli government long to evict activists from Bab Al-Shams. In less than 48 hours, everybody was removed, every tent taken down.

Though short-lived, the village captured international attention and challenged biased media depictions of Palestinians as kufiya-wearing terrorists hell-bent on hijacking planes and executing suicide bombings. More importantly, Bab Al-Shams ushered in a new era of Palestinian activism; one in which Israel’s increasingly militant government, along with its colonial settler front of theocratic vigilantes, will be force fed large spoonfuls of its own medicine.

Patrick O. Strickland is the Israel-Palestine Editor for BikyaNews.com (formerly BikyaMasr.com). His writing has been published in Al-Akhbar English, Fair Observer, GlobalPost, CounterPunch.org, and elsewhere