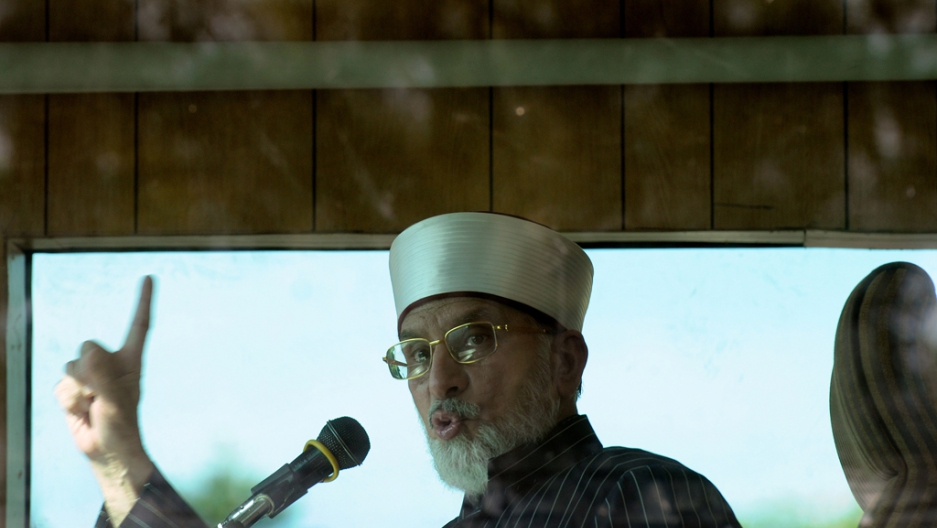 Update: Media reports say the Pakistani government reached a deal on Thursday with cleric Tahirul Qadri to end his mass protests. In return, the government will dissolve parliament in March ahead of May elections, as Qadri had demanded.

ISLAMABAD, Pakistan — A month ago, few people in Pakistan had heard of Tahirul Qadri, an Islamic scholar living in Canada.

But that was before he got on a plane and arrived in Pakistan. Today, for the fourth day in a row, tens of thousands descended upon Islamabad to hear the Sufi cleric-turned-populist leader preach about electoral accountability and an end to corruption.

A government delegation held talks with Qadri to disperse them.

But hordes rallied outside Qadri’s bullet-proof enclosure in the heart of the capital, despite warnings from the government that they are at risk of militant attack. Demonstrators watched and cheered as the cleric pledged to bring Tahrir Square-style revolution to Pakistan.

It's a tall order with an uncertain outcome. But already the controversial cleric and the sheer size of his rallies have raised tensions in Pakistan ahead of a general election expected by May.

“Now we will both live here and die here,” Qadri bellowed in one of his speeches this week, inviting supporters to chant with him.

“Tomorrow the will of the people will rule,” he declared. “The dacoits, thieves, and terrorists who have run this country will be made to pack up and go.”

Qadri arrives on the scene in Pakistan at a critical juncture. The country has been teetering on the edge of democracy since its founding in 1947. Asif Ali Zardari, the country’s current president, will be the first to complete a full term in office. And if elections are called this March, Pakistan will celebrate its first democratic transition of power.

But Qadri isn't only calling for democratic ideals. He is also calling for military rule in the interim to reform the electoral process and to root out corrupt politicians in accordance with the country’s constitution.

He presents himself as a grassroots leader, but Qadri was once a parliamentarian in Pakistan himself, under President Gen. Pervez Musharraf, whom he backed. Critics say Qadri is simply trying to justify military rule.

Others say this could be Pakistan’s moment to take a firm step toward democracy. If numbers tell a story, then his thousands of followers suggest that the latter is at least a possibility.

Over the last couple weeks, it’s become nearly impossible to travel anywhere in Pakistan without seeing images of Qadri’s bearded, bespectacled face. His speeches have aired uninterrupted on every local news channel since he entered Islamabad by way of armored car late on Monday night.

The next morning, the Supreme Court ruled on a long-standing case and called for the arrest of the sitting prime minister, Raja Pervez Ashraf. He is alleged to have taken bribes to approve power-generating projects during his time as water and power minister.

Ashraf has denied charges, and has not yet been taken into custody, despite orders that he appear before the court within 24 hours. The ruling came in the midst of one of Qadri’s speeches and elicited much jubilation from his crowd of supporters, some of whom, no doubt, connect the decision to the ongoing demonstration.

On Wednesday, Qadri called for the current government to step down, labeling it corrupt and incompetent. He has demanded elections within 90 days, according to his Twitter account.

No doubt Qadri’s populist message, which he delivers partly in English and partly in Urdu, the two national languages of Pakistan, resonates with many.

“The inflation and energy crisis has broken our back because of the faulty policies of this government,”  Rehmat Noor, a 60-year-old mother of 11 who traveled 40 miles to take part in Qadri’s demonstration, told Pakistani newspaper the Express Tribune.

“My children are educated but couldn’t find a job,” she said. “The corrupt system does not allow people like us to have equal opportunity.”

But while the anti-corruption sentiment provides enough of a reason for many to sleep out in the cold in support of the cleric, others speculate about his real agenda.

His praise for the military, particularly, has raised suspicion. As have the highly organized — not to mention costly — protests he has been leading.

Qadri himself is ineligible to run in elections in Pakistan due to the fact that he became a Canadian citizen when he left Pakistan in 2005. According to the country’s constitution, dual citizenship holders are not allowed to seek public office.

But Qadri is clearly aiming to shape Pakistani politics in some way.

“He’s always been ambitious himself for politics,” Raza Rumi, a policy analyst at the Jinnah Institute, a Pakistani think-tank, told GlobalPost.

“But there are many in Pakistan who think that the military is backing him. The reason for that, their view is, that the agenda of a military-backed caretaker government also is close to what the army wants.”

Qadri has denied that the military is backing him, as well as the allegation that demonstrators have been paid.

“If you haven’t been able to figure out who’s behind me in one month then [you should] shut up out of shame,” Qadri said in a recent speech.

“You’ve suggested that the military establishment is behind me, this is what you always do: badmouth the military. Shame on you!” he wailed, a finger wagging wildly in front of his face.

Rumi, the analyst, says Qadri’s demands for military rule ahead of elections negates the promise of a revolution like the ones in Tunisia and Egypt.

“The whole idea of turning Islamabad into Tahir Square is rather misplaced,” the analyst said.

“We have a constitution, we have freedoms, we are moving towards an election, and all the people he has mobilized, they can contest elections, and basically, go ahead and bring change through parliamentary means.”

But many in Pakistan feel that entrenched corruption has made it impossible for the average person to have a fair vote.

“We don’t have elections here, we have selections,” Mohammad Munsif, a thin, 52-year-old with thick, graying hair, told GlobalPost.

“There are more people than just Zardari and Nawaz Sharif,” he said, referencing Pakistan’s current president and opposition leader. “But the politicians won’t let anyone else rise up. They want to keep us down.”

Munsif, who runs a snack bar in Islamabad, listened to the cleric’s speech on Tuesday by radio and said he agreed with most of what he heard.

“The ruling politicians, in five years, they haven’t given the lower classes anything. We’re twice as bad off as we were before. So that’s why whatever Qadri is doing is good,” he said.

“I’m going to go there tonight,” Munsif said Wednesday, wiping down the counter with a rag. “I have a feeling deep down that’s telling me to go.”