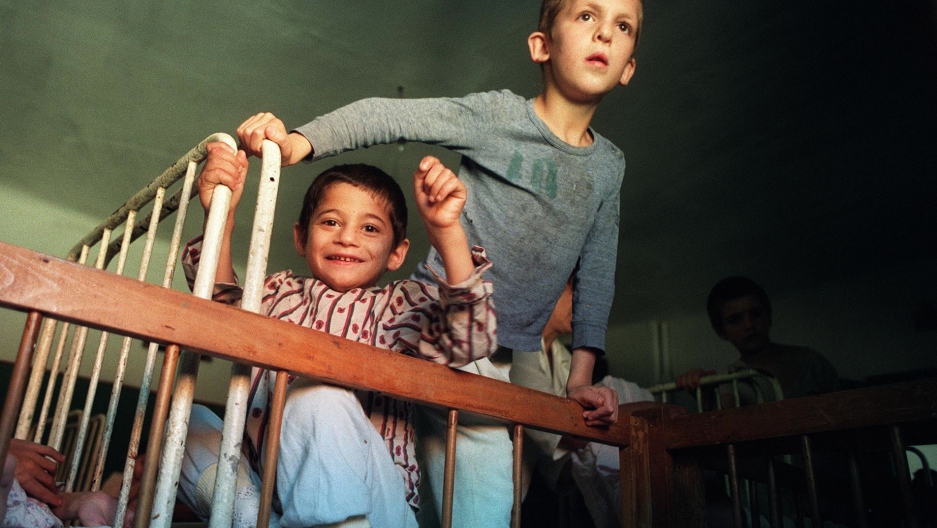 Editor's note: Following the Christmas Day execution of Romania’s long-time communist dictator Nicolae Ceausescu in 1989, the outside world first saw images of tens of thousands of abandoned children living in cramped, filthy institutions across the country.

Ceausescu’s policies — including outlawing abortion and birth control and dictating that every woman bear a minimum of five children — had created a generation of children that were cared for by the state.

Many didn’t survive. But nearly a quarter of a century later, those who did are now young adults.

This is the first of a two-part series that takes a look at two young men who lead very different lives as they navigate society on the outside today.

BUCHAREST, Romania — After the fall of Nicolae Ceausescu’s communist dictatorship in 1989 lifted the curtain on an orphanage system whose grossly unsanitary, overcrowded conditions shocked the world, Mary traveled here from her home in Connecticut to adopt a 1-year-old boy.

Daniel had spent the first, largely unattended year of his life lying in a crib in a cramped, bare-walled maternity hospital in the mountainous Transylvania region.

Mary, who asked that her last name not be used to protect Daniel, believed proper care would make up for the stimulation he’d lacked.

“We thought food and family would solve everything,” she said. “We thought it would just be a process of catch up.”

“We were very naïve.”

Despite growing up in a loving family that provided him with top-notch medical care, Daniel has faced major unanticipated challenges.

Now 23, he’s been diagnosed with a host of mental health issues including anxiety, schizoaffective disorder and Tourette's syndrome, and has come close to being labeled autistic.

He’s hardly alone. Twenty years after thousands of families from the United States, Canada and Europe rushed to save some of them from callousness and neglect, many orphaned and abandoned Romanian children struggle with mental, emotional and physical health issues, as well as the stigma associated with them.

Although Daniel’s challenges may partly stem from inadequate prenatal care and genetics, they’re probably largely attributable to sensory deprivation and lack of attachment in the first key months of his life.

Malnourished, he was fed only liquids from a Coke bottle topped with a nipple until his adoptive parents arrived. His senses weren’t stimulated, his fingers a poor substitute for toys, and he banged his head.

Mary says none of that appeared to matter to Romanian officials when she made her first trips here in 1990. “They looked at me like I had rocks in my head when I tried to ask about Daniel’s birth family and whether there were any medical issues.”

A pediatrician first identified Daniel’s delays soon after he arrived in America.

“He wasn’t paying attention to people,” Mary said. “He was far more attentive to physical issues in the room, what’s now seen as a symptom of autism. He would watch a mobile going around. Inanimate objects rather than people and their faces.”

Problems like Daniel's are common among children who spend the first years of their lives in institutions.

Various studies, including a project following Romanians adopted to Britain and another to Canada, show the younger a child is adopted, the greater chance some of the damage can be reversed.

The Bucharest Early Intervention Project (BEIP) has studied the effects of institutionalization on orphans in Romania for the past 13 years. Working from a small lab in a former Bucharest orphanage, researchers from the US and Romania have compared children growing up in institutions with those living with families.

“We found that institutions are a particularly toxic environment in which to raise young children,” says BEIP’s lead researcher Charles Nelson, a professor of pediatrics and neuroscience at Harvard Medical School.

Institutionalized children exhibit everything from reduced IQs to reductions in brain size and activity, he says.

The researchers say that although any time spent in non-family situations is harmful, their work suggests institutionalization past the age of 2, and in some cases earlier, causes irreversible effects.

Although Daniel’s early intervention therapy began shortly after his arrival in the United States, he didn’t speak until age 3. Enrolled in special education classes in public school, he’s attended occupational, play and speech therapy, and has had a mental health counselor since elementary school.

To help cope with his fears, Daniel created a parallel world of different planets and galaxies.

“He could say that on his planet, Osama bin Laden had turned to the good side,” Mary says. “Anything he was fearful of he found a way to turn for the good in his fantasy world.”

As he starts to face life as an adult, however, Daniel is running into new obstacles.

“People with mental health challenges — it’s off-putting to the general public and in employment situations it’s an area where employers need to work on becoming comfortable and having the right expectations,” Mary says.

However, she says there have been signs of progress: He’s brought his fantasy world back to the Milky Way. It’s now located in South Beach in Miami, Fla.

“He’s handling his anxiety by taking control of his future,” Mary says. “He’s going to live there and meet up with some rappers and work in horticulture.”

Meghan Collins Sullivan is a freelance journalist living in Bucharest, Romania. Her work is supported in part by a Rosalynn Carter Fellowship for Mental Health Journalism.