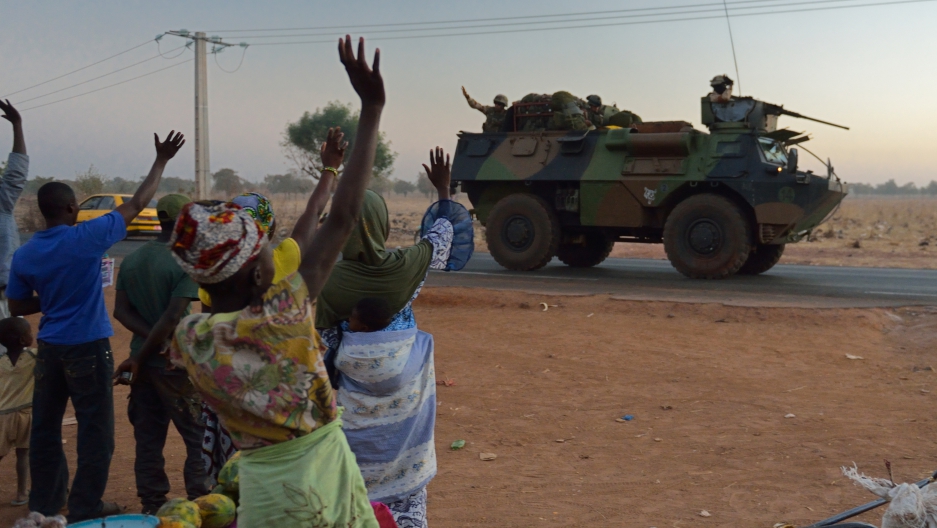 The reality of a formidable enemy and unprepared allies makes it likely that France will be involved in a conflict for months to come.

The French offensive, which began on Friday, pre-empted the deployment of a United Nations-mandated West African force of 3,300 troops that was intended to be trained and ready for deployment alongside Mali’s weak army in September.

The regional force, whose mission is to wrest control of northern Mali from an alliance of Islamist groups, including Al Qaeda in the Islamic Maghreb (AQIM) — which took control 10 months ago — is now playing catch-up.

Soldiers from other African countries are being scrambled to Mali, but the arrival of regional troops won't mark the end of French involvement.

“France will have to do a lot more than hold the line," said Gregory Mann, a Mali expert and historian at Columbia University. "There's a long and integral role for France to play."

On Friday, Hollande sent Mirages and Rafale fighter jets to strafe Islamist positions in response to a plea from his Malian counterpart, President Dioncounde Traore.

The aerial bombardment along the cinched waist of the hourglass-shaped country, which separates the Islamist-held north from the south, halted an advance that some feared may have led to the fall of the capital Bamako, home to 6,000 French citizens.

But the attacks on training camps, armed columns, depots and bases in northern Mali haven't been decisive. Islamist forces have yet to relinquish control of the town of Konna, seized last week. They successfully advanced on Diabaly on Monday.

Hundreds of French troops have been deployed to Mali in recent days as part of Operation Serval (named after an African wild cat). Hollande has announced his intention to send a total of 2,500 French soldiers to guard Bamako and fend off the Islamists.

Soon after the bombing began, France’s Foreign Minister Laurent Fabius said it would be over in “a matter of weeks.” But on Tuesday, Defense Minister Jean-Yves Le Drian had a more sober line. “We should get used to the idea we are embarking on a major mission alongside Malian and African forces for the duration,” he told reporters in Paris.

Although France is something of a lone musketeer at the moment, it has won the unanimous backing of the United Nations Security Council for its actions. The United States is sharing intelligence and has offered logistical support.

Britain and Canada are sending C17 military transport planes to help ferry in African soldiers from Burkina Faso, Benin, Niger, Nigeria, Senegal and Togo, which have pledged hundreds of troops each.

Those troops will need extensive training, equipping and logistical support before they are ready to fight. “A credible West African fighting force able to seize and hold territory in northern Mali can’t be assembled overnight or in a matter of weeks,” said Mark Schroeder, an analyst with security consultants Stratfor.

On the other side of the continent, another foreign-funded regional force has had notable successes battling Al Shabaab, an Al Qaeda-linked group in Somalia. But it took the AMISOM troops there three years to learn how to fight effective urban warfare in Mogadishu.

“There is a great deal of well-founded skepticism about the capacity of the West African forces to operate, especially in the Sahara,” Mann said.

Even if France succeeds in bombing a clear path for ground troops to Islamist-held towns such as Timbuktu, Kidal and Gao, those are little more than specks in the vast desert.

“It won’t be difficult to retake the population centers in the north — there aren’t that many of them. The question is how you take the fight to the Islamists in the desert, which they own, which they know how to navigate better than anyone else in the world. I don’t think any kind of ECOWAS force will be able to do that,” said Bruce Whitehouse, an anthropologist who specializes in Mali at Lehigh University in Pennsylvania.

Besides worries about becoming bogged down in a protracted war, France is also concerned about eight of its citizens currently held hostage by Islamic extremist groups in the region. Two French were among eight more reported kidnapped in Algeria on Wednesday.

“AQIM won’t let challenges go unanswered,” said Whitehouse. Although skeptical of the Islamists’ ability to do so, Whitehouse warned, “There’s no doubt they’re going to try to bring this war home to the French”.

Fearing just such an eventuality, Hollande ordered security to be stepped up in France, which is home to 5 million Muslims, as soon as the Mali operation began.

The French presence in Mali may help stabilize its chaotic politics, which have been in near-permanent crisis lately. In March 2012, angry soldiers overthrew the government after being humiliated by a Tuareg rebellion that was then hijacked by Islamist fighters.

Coup leader Captain Amadou Sanogo has played a destructive role since then, sending his heavies to beat up President Traore and forcing the resignation of Prime Minister Cheikh Mobido Diarra last month.

However, the French offensive, wildly popular on the streets, has silenced Sanogo’s vocal opposition to any foreign intervention.

Many of the French soldiers will be posted in Bamako “with the express purpose of protecting the city, protecting French citizens and protecting the government from the junta,” Dakar-based analyst Andrew Lebovich said.

“Sanogo has lost a lot of his influence and power,” Mann said. “Civilian rule could come out stronger.”

That could enable the formation of an effective government no longer cowed by Sanogo and his cohorts, something Todd Moss, senior fellow at the Center for Global Development, says is essential. “The politics are the exit plan," he said. "There is no exit for anyone without a political solution.”

But a political solution may prove even further off than a military one. As it settles in for the long haul, France, the former colonial master, can't expect the current surge of goodwill to last.

“France is intervening in Mali for French interests," Mann said. "That happened to coincide with the interests of the Malian government and people, but over time the differences will become more apparent."