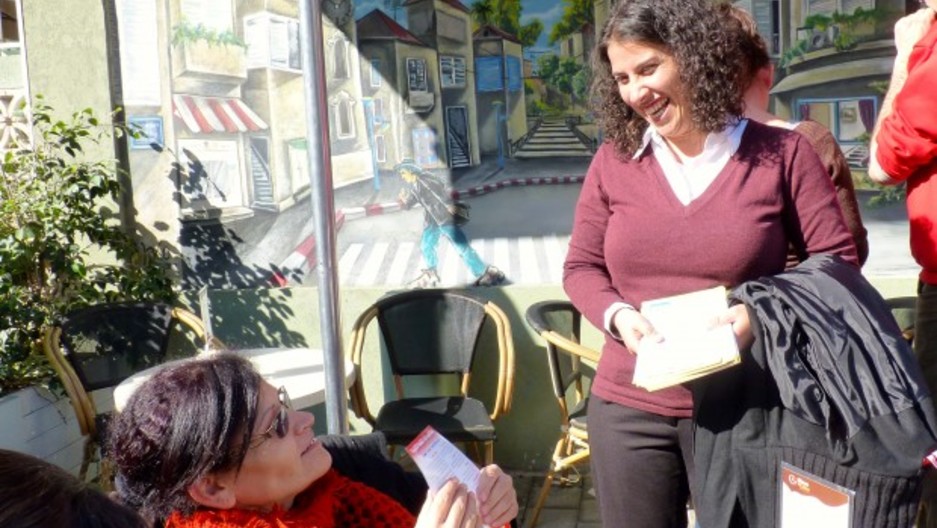 Share
Arab-Israelis make up about 20 percent of Israel's population. They have disproportionately high rates of poverty and unemployment. But hopes of addressing those issues through the ballot box are low, and Arab-Israeli voter turnout is falling. The World's Matthew Bell explains. Israelis go to the polls next week and the pollsters and pundits say Israeli right has this election in the bag. But the Da'am workers party insists there's a "New Left" on the rise in Israel, with an Arab woman at the helm. Asma Aghbarieh-Zahalka is a 39-year-old trade union organizer from Jaffa, a mixed Arab and Jewish city on Israel's coast. Out campaigning on the street, she tells potential voters that Da'am — which means 'support' in Arabic — is the only party with Arabs and Jews working together. Aghbarieh-Zahalka told me she sees an historic opportunity in this election. The party's goal, she said, is to tap into the energy that unleashed nationwide protests in 2011 for social and economic justice. And ride that momentum straight into Israel's parliament. "Let's take these demonstrations to the Knesset," she said. "Say to the government, to the right wing, that people want change. They will vote not for the same parties that failed." But this level of enthusiasm about the upcoming election is rare among Arab citizens in Israel, to put it mildly. The mixed Christian and Muslim city of Nazareth is known as the Arab capital of Israel. In municipal elections here and other Arab towns, voters turn out in droves. But unlike say, Hispanics in the US, Arab citizens in Israel have never capitalized on their sheer numbers at the national level. A decade ago, nearly 80 percent of Arab voters took part in the national election. But this time around, less than 45 percent are expected to turn out. Vida Mashour is a newspaper editor from a prominent Nazareth family. At the start of the campaign season, she spoke with me about the election in a popular lunch joint. Mashour said the Jewish candidates do not look after Arab interests. And Arab politicians aren't much better. So, for the first time, she said she will be sitting out this election. "I see that nothing helps. Even the Arab candidates, they didn't do anything for us," Mashour said in frustration. "It's business for themselves, they don't do anything." But part of the problem for Arab political parties is that they can't do much. That's because, when it comes right down to it, they operate in the margins of Israel's democracy. "It's not just one man, one vote — or one woman, one vote — it's not just about representation in parliament," Mohammad Darawshe, director of the Abraham Fund, a non-profit that promotes coexistence between Israel's Jewish and Arab citizens, told me during an interview in his office. "It's about participation in power sharing and that's what the political game in Israel does not offer. It does not offer power sharing for the Arab candidates in the Knesset." Darawshe says some of the blame belongs to the old guard of Arab politicians who have pulled away from working with their Jewish colleagues in government. Anti-Arab racism is another factor, he said. But the upshot is this: if Arab parties are not going to be part of a coalition — either those in power or those in opposition — they are basically an island unto themselves. Darawshe said that doesn't mean they should give up. "Even if we don't see the obvious candidate that can tango with us politically in the Jewish community, at least we need to in the market to form a coalition," Darawshe said. "We might not get bought. But we need to have our product in the market." The Abraham Fund commissioned a poll on Israel's Arab voters at the start of this election season. It found that many Arab citizens have no faith that Arab lawmakers can get things done in parliament. Still, Darawshe said Arabs who decide not to vote are making a huge mistake. Back in Jaffa, candidate Asma Aghbarieh-Zahalka told me she is hoping to turn frustration and skepticism among Arab voters into votes for her Da'am party. "This is a very good chance for the Arabs and Jews to combine together in the same principles," she said. "People who want to live in peace and to live in social justice, we will not be able to do it alone — the Arabs alone and the Jews alone. We have to do it together and Da'am is the chance to do it." Aghbarieh-Zahalka told me she just bought a new outfit for her first day in Knesset. Then she laughed, as if to suggest that she is all too aware of the steep road ahead. The polls don't give Da'am much of a chance. And in any case, none of the mainstream Jewish parties, for example, has talked about working with any their Arab counterparts after election day.