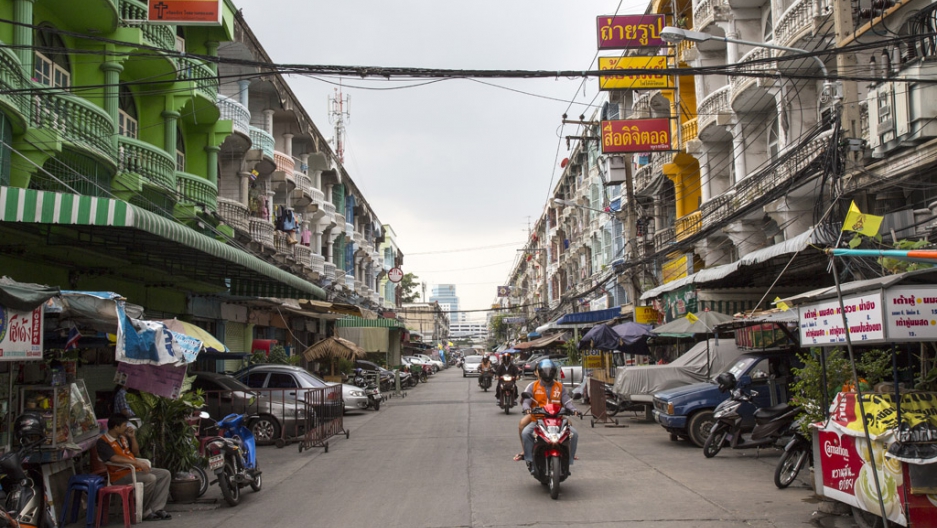 Scenes in the slum of Klong Toei in Bangkok, Thailand on December 7, 2012.
Credit: Ed Kashi/VII
Share

BANGKOK, Thailand — It is the hope of any good foreign correspondent to take readers on a journey, to set out to find stories and insights that might challenge assumptions back home and allow for a new understanding of the world and how we see ourselves in it.

There are few young journalists with more natural talent in this craft of international reporting than GlobalPost’s senior Southeast Asia correspondent Patrick Winn. He has been based in Bangkok for the last four years.

We asked Winn to help us navigate the first leg of our journey around the world in a Special Report titled “The Great Divide: Global Income Inequality and Its Cost.”

In this GroundTruth video series in which our correspondents reveal “the story behind the story,” Winn gets us started on a project that involves more than 20 experienced reporters, photographers and videographers. They’ve all set out to different corners of the world to explore the issue of rising income inequality, a problem which President Obama has called “the greatest challenge of our time.”

The series, which will launch on January 17, is funded with support from The Ford Foundation. Based on nearly six months of reporting and data analysis, the Special Report explores how inequality in America compares to the rest of the world and what lessons there are for American readers to learn about the cost of inequality.

In short, we are out to explore why we should care that the US is one of the most unequal of the 34 leading industrial countries in the world. We are out to ask hard questions about the costs of such inequality and what can be done to address it. Winn and GlobalPost columnist Michael Moran get us started on this journey by taking us from Connecticut to Thailand.

It’s hard to think of two places further apart politically, culturally and economically than the vibrant, unruly metropolis of Bangkok and the staid New England state of Connecticut. They are literally on opposite sides of the world with air travel from Connecticut to Bangkok taking a solid 20 hours and covering almost 9,000 miles.

But they have the same level of income inequality as measured by an economic metric known as the Gini coefficient. It turns out that the Gini coefficients for Thailand and Connecticut, specifically Connecticut’s Fairfield County, are almost the same. In other words, the distance between the richest and the poorest in Thailand is equal to the distance between the rich and the poor in Fairfield County.

Intuitively, we think of Thailand’s capital city, Bangkok, as a place of neon-lit shopping malls with high-end boutiques and a wealthy elite that lives right up against slums teeming with poverty and disease. But many readers and viewers of these video segments will be surprised to learn that Fairfield County has the same the level of inequality, with the almost obscene wealth of Greenwich on one end of the spectrum and the struggling city of Bridgeport on the other.

The story behind the story: Michael Moran on income inequality in Connecticut

I recently visited Winn in Bangkok and saw him at work, living a noble creed of ‘ground truth,’ which is all about being there on the ground, living and breathing the story. Winn does all of that. He hails from Eden, North Carolina and has just a hint of a drawl, but you can’t hear it when he is speaking in a fast clip of fluent Thai. He has developed great sources, insights, and a keen understanding of a city that is buzzing with good energy and severe corruption, with ungodly traffic and wonderful hidden corners, with the unfathomably rich and the desperately poor.

More From GlobalPost: Glitz and desperation in a Bangkok divided by income

Bangkok is a hard city to decipher, but one that Winn has come to embrace as a muse. And in this video, shot by award-winning photojournalist Ed Kashi, you are in the hands of a good guide on an important journey. We hope you will join us as we set off to explore ‘The Great Divide’ in a series of reports published on GlobalPost in the coming weeks.