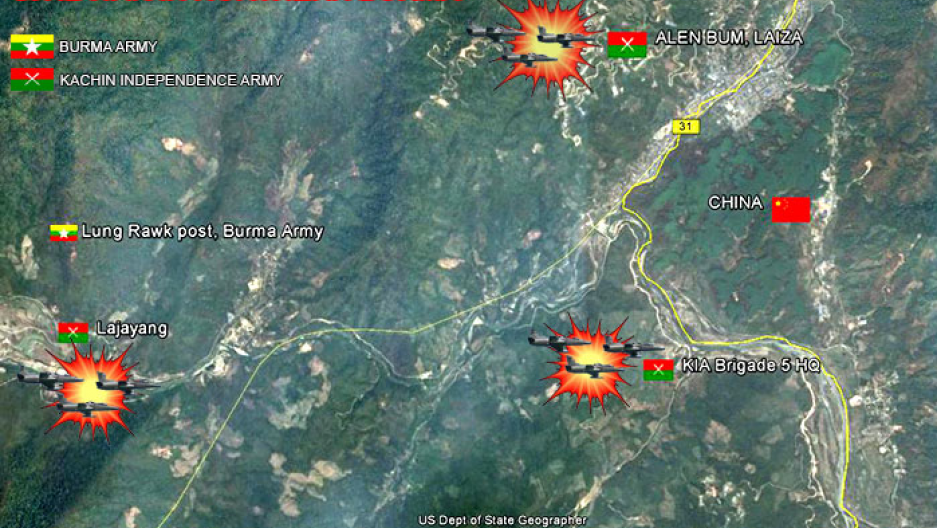 So much for peace in Myanmar.

Though lightly reported in the West, air assaults appear to be intensifying along the remote Myanmar-China border -- a mountainous zone where ethnic guerrillas and state forces are locked in combat.

These are scenes government leaders claim they want to leave behind: mortars lobbed into a populated insurgency town (Laiza, a stronghold located right on the Chinese border) and helicopter gunships firing munitions into guerrilla camps.

As I've written previously, hard facts from this region -- populated by the largely Christianized Kachin ethnic group -- are hard to come by. But several air strike locations on this map, created by a Kachin news outlet, are backed up by independent sources.

Myanmar's leaders -- eager to spotlight their grand new reforms -- have finally admitted to using attack aircraft on guerrilla forces that have none of their own.

That doesn't mean the nature of these attacks are entirely clear. Example: while the Kachin fighters claim to have shot down a chopper, the government reports a helicopter's "emergency landing due to engine failure" in which three crew members "sacrificed their lives for the country."

Meanwhile, President Thein Sein is lauding the "sacrifices in blood and sweat" made by Myanmar's military, according to Agence France-Presse. An op-ed in a Kachin news outlet warns that the government is "enouraging Balkanization" and that "there is no choice but to rebel."

Though failing to capture many headlines in America, this intensifying war at China's border could very well portend the course of a nation growing closer to the U.S. while continuing to suffer all-out ethnic conflict both in its mountains and on its coast.