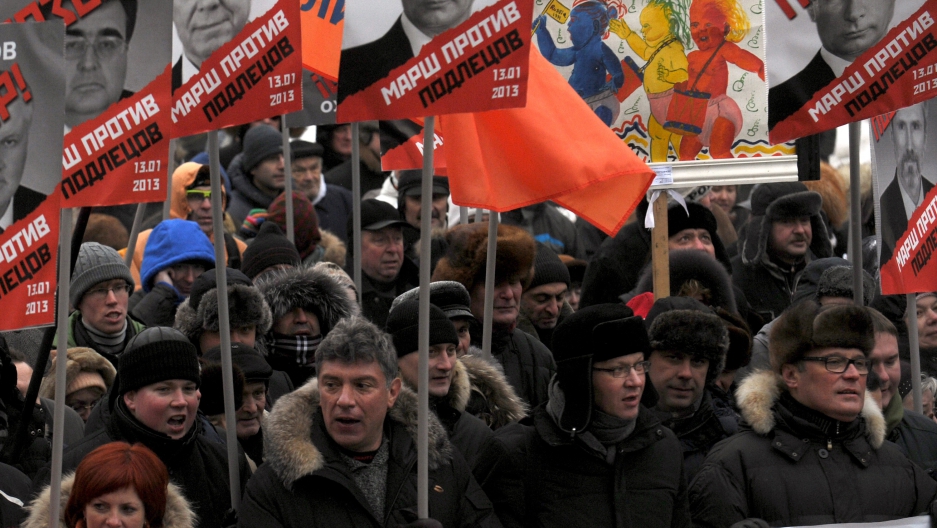 Signed by President Vladimir Putin on Dec. 28, the law is seen as retaliation for America's passing of the Magnitsky Act, which denies visas for Russians accused of human rights violations as well as freezes their US assets, Bloomberg Businessweek reported.

It also addresses long-brewing resentment in Russia over the 60,000 Russian children who have been adopted by Americans in the past two decades, 19 of whom have died.

There are about 740,000 children available for adoption in Russia, but only 18,000 Russians on the adoption waiting list, UNICEF reports.

“Nobody cares for these children, and no one needs them,” Liza Kulkova, a protester from Klin, Russia, who volunteers at an orphanage, told Bloomberg Businessweek. “This is my first protest, and I don’t think it will make a difference but I came anyway. These kids are a living tragedy, and it’s outrageous to use them for a political end.”

Protesters brandished posters with photographs of the politicians who voted for the adoption ban, Bloomberg Businessweek reported.

Other posters proclaimed, "Parliament deputies to orphanages, Putin to an old people's home," and "For a Russia without Herod,” the AP reported.

The Kremlin, however, argues that they are an economically developed country who has been "trading" their children to the US far more than is necessary, the New York Times reported.

“We hope that these people, who came out to express their opinion, are aware of the plans of our nation’s leaders to bring order to the adoption process, and the implementation of a range of measures aimed to improve the lives of orphans,” said Kremlin press secretary Dmitri Peskov.

About 500 to 1,000 Russian children are in the process of being adopted by US families, the US State Department said, according to the AP.