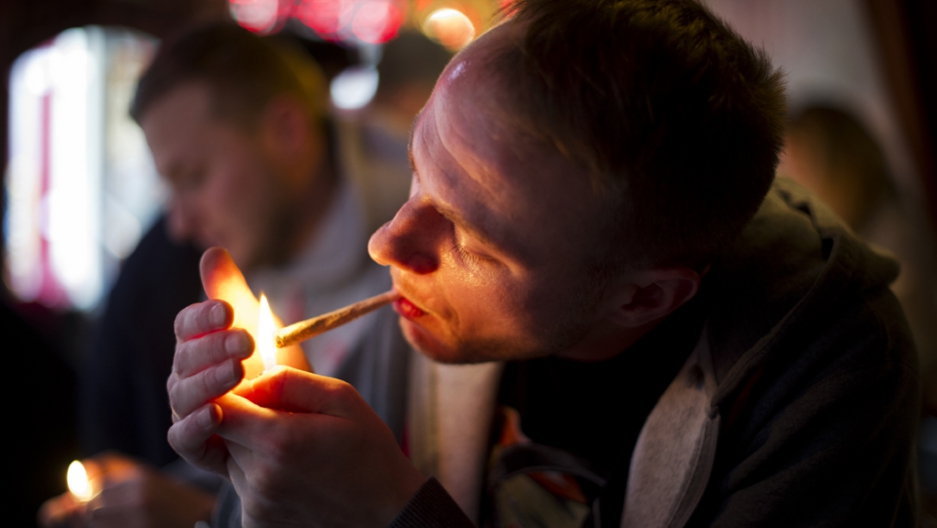 Jay, a 29-year-old from London, lights a cannabis joint in a coffee shop on Nov. 1, 2012, in the center of Amsterdam, Netherlands. The ban on foreigners entering coffee shops came into effect last May in the Netherlands' southern provinces, but after intense lobbying by city authorities in Amsterdam it's now up to each city to decide how to apply the cannabis laws.
Credit: Jasper Juinen
Share

On a wet winter afternoon, the place was empty. The palm-tree murals went un-admired, the elaborate smoke-extraction system was turned off and the tupperware containers of cannabis sat unsmoked on the shelves.
Owner Henk Peelen says his "coffee shop" — the Dutch term for a cannabis cafe — has fallen victim to laws that came into force last year to stop foreigners from taking advantage of the Netherlands' tolerant approach to soft drugs.
"Because of the ban on customers who came from abroad, I had to sack all my staff, 11 people," he said.
About half of Maastricht's 14 coffee shops have shut down since May, when the new rules took effect. Others have seen a radical decline in customers and Peelen says almost 400 people have lost their job across this southern city.
"It's costing the city a lot of money," he complains.
Amsterdam is a two-hour drive north of Maastricht. In the heart of the capital's red-light district, the scene in its best-known coffee shop could hardly be a bigger contrast. The cheerful, international crowd spilling out of the canal-side Bulldog is an illustration of the complexity of Dutch drug laws.
The ban on foreigners entering coffee shops came into force last May in the Netherlands' southern provinces and was due to take effect across the whole country on Jan. 1, limiting access to marijuana outlets to Dutch residents who register to obtain a "weed pass."
However, after intense lobbying by city authorities in Amsterdam, which feared a loss of tourist revenue, a new Dutch government elected in September agreed to change tack. The law still stands, but it's now up to each city to decide how to apply it.
"We would like to inform you that coffee shops are OPEN in Amsterdam," the Bulldog proclaims on its website.
That may be good news for tourists hoping to chill out with a toke after a trek around the flower market or Van Gogh Museum, but not for the weed lovers of Maastricht.
"It's death penalty for cannabis culture," says Roger Willemsen, whose Organic Earth store sells cannabis seeds and other products for customers seeking to grow their own. "It's the world turned around. Instead of going forward they are going backward."
The city hall in this pretty riverside university city of 122,000 — close to the Netherlands' borders with Belgium and Germany — sees things differently.
Mayor Onno Hoes had lobbied for the new restrictions, complaining Maastricht was being overrun by rowdy foreign youngsters flooding into town to get stoned.
"In Amsterdam there are tourists going to visit the museums and the canals who go to the Bulldog or some other coffee shop to smoke some weed. Here you had people coming in just to visit four or five coffee shops and buy up the maximum amount of weed," explains Gertjan Bos, the mayor's spokesman. "They were noisy, unruly, a nuisance."
Bos says the weed pass has successfully halted the flow of an estimated 1.6 million foreign visitors a year who came to the city for pot.
Although the coffee shop association calculates the decline in dope-smoking visitors has wiped out income of about $185 million, Bos denies there's been any significant impact on the city's wider economy.
However, he acknowledges that the weed pass idea has not been entirely successful. Provisions designed to turn the cannabis outlets into private clubs where all clients must register as members have scared away Dutch customers, forcing the closure of coffee shops.
Recognizing the problem, the city hall announced in September it was dropping the registration requirement so customers need only show their Dutch passport or local residence papers to gain access to coffee shops.
Peelen, however, is not convinced.
He says Club 69 — located across the street from Maastricht University's arts and social science faculty and next door to an "erotic discount center" — has enough customers to keep afloat, but doubts others will reopen unless an ongoing legal challenge forces a change in city policy.
Meanwhile, he claims the new restrictions on coffee shops have led to an "explosion" of illegal street dealing.
"There is more criminality on the street, more aggression. People feel unsafe. What sort of first impression does that give to people coming from abroad?" Peelen asks.
Bos counters that tough police action has cracked down on street trading while the new measures to encourage Dutch pot smokers to return to the coffee shops will further undercut the illegal dealers.
A short walk from Club 69, Willemsen's emporium for pot cultivators is packed with lamps, fertilizers and sacks of soil. There's also a baffling array of seed varieties ranging from the modest African Widow, going for just $13 for a packet of 10, to the likes of G13 Haze New York Diesel retailing at $185.
Willemsen says the sale of cannabis seeds is completely legal and the grow-your-own business is booming since the weed pass was introduced.
"Of course it depends on what they do with them. We sell to customers who maybe want to feed them to their canaries or grow the plants for a windbreak in the garden," he says with a smile.
"There's a Dutch mentality, a lot of people thought it was tolerance, but it's not tolerance, it's creativity. People in Holland know the rules, but there's always a way to get around them."