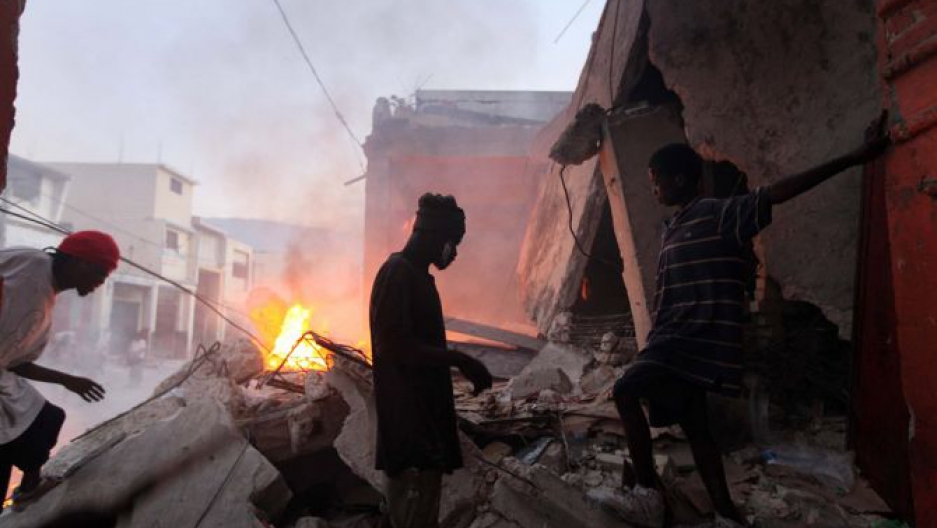 Looters take what they can from a building that was destroyed during the massive earthquake in Port-au-Prince, Haiti.
Credit: Joe Raedle
Share

BOSTON – Three years on from the devastating earthquake that brought Haiti to its knees and the world to its aid, there is, by many accounts, light emerging from the darkness.

It is a light that radiates, in part, from several sources right here in Boston, people who have dedicated extraordinary time, effort and money to help Haiti build a teaching hospital and a new orphanage. And you can literally be part of spreading the light through a campaign by a startup company known as MPOWERD.

MPOWERD has developed solar-powered lanterns for Haiti that can end what this company calls “energy poverty.”

But I will come back to the light that these three projects — the hospital, the orphanage and the lanterns — provide.

On January 12, 2010, a country that was already the poorest in the Western Hemisphere was rocked by a 7.0 magnitude earthquake that killed more than 200,000 and left more than one million homeless. (The precise figures remain very much in dispute to this day.)

Regardless of the exact toll of its devastation, today there are still several hundred thousand people who remain without homes, living in fetid camps. That suffering occurs despite more than $12 billion in total aid that was committed to Haiti by the international community.

The vast squandering of that aid and the outrageous corruption and incompetence of the Haitian government has been the focus of reporting by GlobalPost for the last year. Our focus has also been on the obscene mismanagement of corporate NGOs that have been awarded big contracts to deliver the aid, yet fail to listen adequately to the Haitian people about what is needed and the best way to deliver it.

The GlobalPost Special Report, “Fault Line: Aid, Politics and Blame in Post-Quake Haiti,” has explored the good, the bad and the ugly in Haiti’s effort to rebuild itself in the aftermath of the quake. We are proud of the extraordinary work that our team of American and Haitian journalists have done together and we are thankful to The Ford Foundation for supporting the work. It is 'ground truth’ at its best.

The work has been hard-hitting, uncovering US congressional inquiries and federal probes into large NGOs that have received lucrative, cost-plus contracts. The Special Report broke new ground by looking at the absurdity of US subsidies to American rice farmers that undercut and impoverished Haitian rice farmers – all in the name of delivering emergency food aid to Haiti.

Our stories have not shied away from fighting against the many injustices there.

But our stories have also been about good people from Haiti and from all over the world working together to help those in need. We have sought to highlight examples of the effective use of aid and smart initiatives that are getting the job of rebuilding Haiti done.

On this anniversary, I would like to highlight three outstanding and very different efforts that have stood out to our reporters on the ground, and stood out to me when I visited Haiti earlier this year. These are the hospital, the orphanage and a source of light. Here are the stories:

1. The hospital - The University Hospital of Mirebalais was built under the leadership of the American NGO Partners In Health (PIH), which was founded by Dr. Paul Farmer. The hospital is the largest post-quake health project in the country and by far the most well-managed undertaking in the last three years, as GlobalPost’s Jean Phares Jerome reported.

I had a chance to see this effort in action earlier this year. Jim Ansara was there to greet us in Mirebalais when we first arrived, and right away he wanted to show us around the 180,000-square-foot teaching hospital that has been his passion and his obsession for most of the last three years.

Ansara, the founder of Shawmut Design and Construction here in Boston, is the director of construction for PIH. Ansara is something of a local hero in Boston, particularly to the labor unions here, where he was seen as a staunchly pro-union employer. Ansara used those connections to inspire union plumbers, electricians and carpenters to come to Haiti to work and train Haitian workers to learn the skills that keep them employed long after the aid projects pack up and go home.

I heard the Boston accents and saw faded Red Sox caps and plenty of Irish grins among the onsite workers whom Ansara was leading. The beautiful skill and craft of their professions was evident at every turn as Ansara showed us his life masterpiece while it was still a work in progress.

The project was completed very close to on time and on budget, but there have been delays in staffing the hospital and providing adequate training to the doctors and nurses to operate in a new facility. There was a ribbon cutting ceremony in November to announce the completion of the building, and PIH officials say it will be opening in the very near future.

2. The orphanage - It’s a 19,000 square foot facility in the shape of a letter B, and it is called Be Like Brit. The project was built by a Boston-area family who lost their daughter in the earthquake.

Her name was Britney Gengel and she was a 19-year-old college sophomore who had gone to Haiti to serve meals for a Christian charity. She died when the hotel where she was staying, the Montana, collapsed. The $1.8 million facility in her memory will house 33 boys and 33 girls, the precise number representing the number of days Britney’s body lay under the rubble before she was confirmed dead.

The campaign to raise support for this effort grabbed the hearts of many in Boston and became a cause that drew in many citizens who wanted to do something tangible for Haiti. Boston has one of the larger Haitian diaspora communities in America, but the outpouring of support here was not unlike the outpouring of support in many corners of the world.

The difference in Boston might be the way the community stayed with it and didn’t only donate money in the aftermath, but provided extraordinary hours of volunteer work and organizing projects. All of that effort seems best symbolized by Be Like Brit, which opened earlier this month at a ceremony attended by Massachusetts political and community leaders and many family and friends of Britney Gengel.

3. The light - One company has developed a unique, renewable energy solution that is helping Haitians who still live in the darkness of displacement camps, in poor corners of cities, and in rural areas where energy is still not restored, if it was ever steadily available.

They are solar-powered lanterns named Luci, and as MPOWERD co-founder and CEO Jacques-Philippe Piverger sees it, their application will go beyond Haiti. MPOWERD hopes that Luci will reach nearly 3 billion people who live in complete energy poverty or in areas with unreliable energy.

The company has started a crowd-funding campaign through Indiegogo to scale up distribution of the lanterns that will allow Haitian families to see at night, for school children to do their homework and for the country to move away from expensive and dangerous kerosene lamps that produce toxic fumes and can result in fires that cause severe burns.

“Indiegogo offers an incredible opportunity for anyone to contribute and help us fulfill our dream of ending energy poverty. This is one of the most important development challenges facing us today, and we can no longer afford to ignore those who face tremendous challenges to their health, education, and safety simply because they lack adequate lighting sources,” said Piverger.

The goal of the campaign is to raise $200,000, according to Piverger, who is an extraordinarily energetic and effective entrepreneur, who has been telling me about these lanterns over the last year and who is now building a head of steam to get this done.

Say Hello to Luci from MPOWERD on Vimeo.

To learn more about Luci or MPOWERD, or to make a donation, visit the campaign webpage: http://www.indiegogo.com/mpowerd

Charles M. Sennott is the Executive Editor and co-founder of GlobalPost.