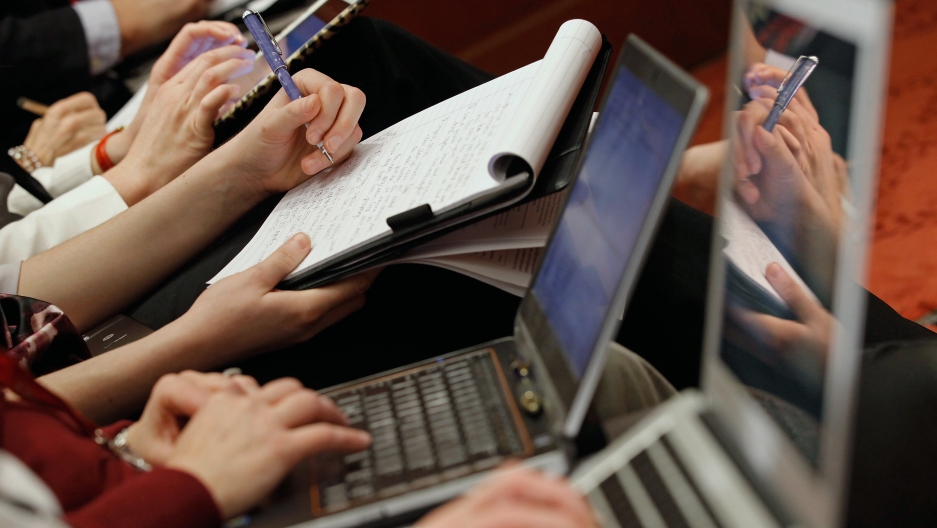 Reporters use laptop computers, iPads and paper and pen to take notes during a panel discussion organized by NetCoalition about the Protection IP Act (PIPA) and the Stop Online Privacy Act (SOPA) at the US Capitol on Jan. 19, 2012.
Credit: Chip Somodevilla
Share

Global shipments of desktop and laptop computers in the fourth quarter of 2012 were 6.4 percent lower than a year earlier, research firm IDC announced today, according to USA Today.

According to the Wall Street Journal:

The year-over-year PC shipment decline is the first to occur during the holiday season in more than five years.

As consumers snapped up tablets and smartphones, "the PC market continued to take a back seat to competing devices and sustained economic woes," IDC said, according to USA Today.

Global shipments of PCs for all of 2012 were down 3.2 percent to 352.4 million, IDC said, according to the Wall Street Journal.

For the United States alone, PC sales dropped 4.5 percent in the fourth quarter, and were down 7 percent for the full year 2012, IDC said, according to USA Today.

IDC reported that Hewlett-Packard Co. shipped the most PCs in the fourth quarter, sending 15 million computers out of its factories, followed by Lenovo, Dell, Acer and Asus, according to USA Today.