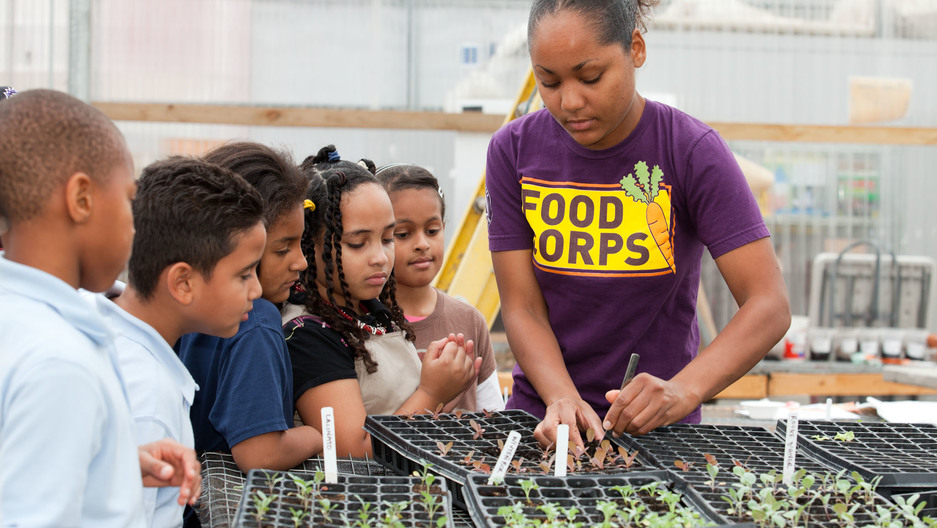 Individuals inspired by the future of sustainable agriculture and changing the way Americans eat can find an opportunity in making a difference with FoodCorps.

Part of the AmeriCorps Service Network, FoodCorps gives young adults and recent graduates an opportunity to work with nonprofits across the United States to help connect school children to healthy food and teach them where it comes from.

Curt Ellis, co-founder and Executive Director of FoodCorps, says the organization was born out of the realization that the nation is facing a tremendous problem of childhood obesity. And a whole generation of school children is growing up with limited access to healthier food.

But this food problem, Ellis said, also presents an incredible moment of opportunity.

“There’s another generation of young people, specifically in their 20s and 30s, who are fired up about food and agriculture and want to get their hands in the dirt, making a difference,” he said.

FoodCorps emerged to tap into the power and talent of young leaders, Ellis said, and to help connect all children to healthy food. FoodCorps has 80 full-time people working in 12 states.

"There's this tidal wave of interest from young leaders who want to be involved in transforming our food system in America,” he said. “We started to put word out over the Internet and social networks, through partner organizations and across college campuses and before we knew it we had more than 1,000 people applying to join FoodCorps class of 50 service members.”

This August, the organization plans to grow their in-field staff to 100 people.

Erin Taylor was part of the inaugural group of FoodCorps staff, during the 2011-12 school year. She says her path to FoodCorps began in a public health classes at Tufts University in Boston.

“I was already really interested in environmental issues and then I started learning more about environmental issues tied-in with population wide health problems such as obesity,” she said. “The more I learned about both, the more connections I saw in food as a kind of node connecting a lot of different social issues.”

The summer after she graduated, Taylor worked fulltime on a farm, but found she missed working with kids.

“When I read the description of FoodCorps and saw they were wanting to tackle the issues I’ve always wanted to tackle by working with kids in public schools, I thought, this is exactly what I want to be doing,” she said.

FoodCorps is designed for people who don’t necessarily have years of farming experience or a teaching degree, but for people, Taylor said, who are excited and passionate about food and health issues and educated about them.

After Taylor was accepted into the program, she was placed with the nonprofit CitySprouts in Cambridge, Mass., and worked with a school in Gloucester.

"My role was to introduce CitySprouts to a school in a school district that has never had a program before,” she said.

Portions of Taylor’s work involved tending to the school garden the way a librarian would tend to a school’s library, as well as sitting down with teachers to explain how the school garden could be used to support their curriculum.

But Taylor’s work in Massachusetts wasn’t the same as the other service members who served that same year.

What makes FoodCorps different, Ellis said, is it takes a different approach — basically that communities already have the answers.

“Our job is to help start those conversations, ask the right questions and bring people together around the table to really build a school food system that feels appropriate for Jackson, Miss., or rural Montana. And that’s going to look somewhat different in those two places,” he said.

Ellis says America has the power to transform its reputation as a fast food nation.

“We have a chance to use food to change what it might look like to have a world built on principles of sustainability and social opportunity and health,” he said. “Food is just a starting place for getting there.”