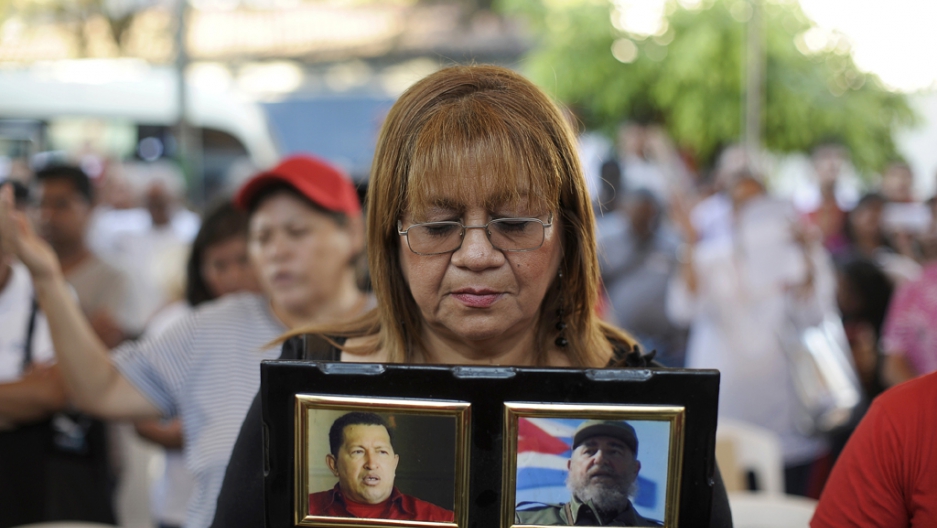 "Chavez is a Latin American sentiment that will never die," she said.

Since President Hugo Chavez announced that he was suffering from cancer in June 2011, Torres has led prayer vigils for the self-styled socialist’s health in her Caracas slum. Given events of the past month, however, she seems to have failed in her aims.

Chavez missed his inauguration Thursday, the first Venezuelan president to do so. This was thanks to his ongoing battle with cancer, specifically an operation in Cuba on Dec. 11 which was followed by unexpected bleeding and a respiratory infection.

The ubiquitous television and radio personality has not been seen or heard from by his countrymen since then, fueling fears that he will never again govern Venezuela.

In previous periods of convalescence, there has at least been a telephone call to state television or similar proof of life. But for Torres, that’s not a problem. "While Chavez is breathing, he will be the president," she said.

Her words echo those of Nicolas Maduro, vice president and Chavez’s chosen successor.

“Chavez is all of us. Chavez is Venezuela,” he shouted to tens of thousands of supporters clad in red T-shirts and baseball caps on inauguration day, in a style not unlike the president's.

By naming a successor before this latest trip to Cuba, in early December, Chavez ended a taboo that has helped stave off leadership attempts and ensured his name is synonymous with the revolution he has led.

Now, Chavez the man may be on his way out but the government is working hard to ensure his legacy lives on.

Signs have sprung up all over Caracas: "We are all Chavez," they say. "I am Chavez," is scrawled across T-shirts. In this country obsessed with its smart phones and Twitter, the hashtag #yosoyChávez is trending.

His supporters, like Torres, are buying into the idea that no matter the physical state of Hugo Chavez, his revolution will live on.

The country’s opposition is not so impressed.

"Trying to make the country believe that the president is governing is absurd," Ramon Aveledo, head of the opposition coalition which fought hard in October’s presidential election, said at a press conference.

Henrique Capriles Radonski, the opposition candidate who was 11 percentage points behind Chavez in that election, has been relatively moderate in his criticisms of the government. Though, he has called Chavez’s absence from his own inauguration unconstitutional.

Reading from the document at a press conference, Capriles said, "The Supreme Court has to take a position on what the constitution says," adding that Venezuela was neither a monarchy nor Cuba.

Capriles' moderate response to the saga has not been enough for some hardline opponents of the Chavez government.

Tomas Guanipa, of the opposition Justice First party, said that a “power vacuum” would exist should Chavez not be properly inaugurated last week.

Maria Corina Machado, a former opposition candidate, tweeted this morning: “Today Venezuela wakes up to a government usurped,” alongside a cartoon of a guillotine chopping up copies of the country’s constitution.

“It’s a circus; it’s outrageous,” said civil engineer Carlos Rivero in Caracas. “The government has used the constitution as toilet paper.” He also struggles to believe the government’s pronouncements on Chavez’s health.

“For all we know, he could be dead and the Cubans could be pulling the strings.”

Should Chavez die or be permanently unable to take power, new elections will be called within 30 days in which Maduro will fight an opposition candidate, likely Capriles who will still have momentum from a strong performance against Chavez in October’s presidential election as well as a regional election win in December.

With the blessing of Chavez before he left for Cuba a month ago, however, Maduro seems likely to win any election that is called.

“I don’t think Chavez is coming back,” said Luis Vicente Leon, a Caracas pollster who correctly called October’s election. “Maduro is going to be the candidate and starts as favorite. I see him governing for at least one term.”

Rivero admitted that Maduro would have the upper hand, “but Capriles can still win,” he said.

Jonny Fernandez, 55, stands in a shop doorway in a Caracas slum, and echoed questions which Venezuelans have been asking for 18 months, since Chavez first announced his cancer. “No one knows if Chavez is well, if he’s ill, if he’s going to get better or not.”