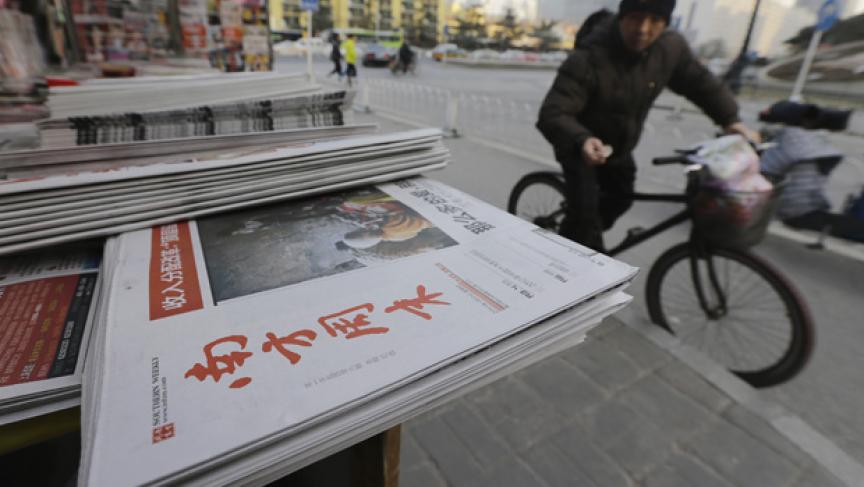 A stack of the Southern Weekly are left on display at a newsstand in Beijing, January 10, 2013. (Photo: REUTERS/Jason Lee)

It used to be a lot easier being a propaganda official in China. People listened to you, maybe feared you, and certainly didn't go public with your attempts to create a rosier image of China's leaders.

Didn't work so well in Guangdong, this past week.

The journalists responded by going on strike – and their protests for freer press in China caught on.

"They insult our intelligence!" yelled one protester. And in a heated exchange, a young man said he supported the constitution and opposed what the censor did. An older man responded, "Well, the constitution is for the Communist Party running China." The younger guy retorted "The constitution grants the freedom of speech!"

He turned to the crowd, yelling "should we support freedom of speech?" And they roared their approval.

A similar rallying cry went up online. Even with censors furiously deleting critical posts, enough stayed up long enough to be seen by millions, with many — including celebrities — offering vocal support.

"This is a severe warning to the authorities, that their traditional way of managing the media has triggered anger. They need to do better," said Li Datong, a former newspaper editor.

Li Datong used to edit the edgy supplement "Freezing Point" in the China Youth Daily in Beijing. He lost his job in 2006 for doing something too close to real journalism for the comfort of China's authoritarian leaders.

Back then, he said, far fewer people in China knew when the censors weighed in, even when they got rid of someone. He's surprised and heartened by how much celebrities, and even some commercial websites, have taken up the Southern Weekly cause.

"It's a great sign of progress," Li said. "It shows that people's awareness is growing, that freedom of speech shouldn't be just for a few people."

But Li wouldn't call himself an optimist about the current situation. After all, it's not yet clear what new Party chief Xi Jinping thinks about all this.

Yukon Huang, who headed the World Bank's China office for seven years and is now with Carnegie's Asia program, says the past week's events have given China's new leaders much to think about.

"If they deal with it successfully, that preserves stability. But then, there is that slippery slope," he said. "And the slippery slope gets slipperier. And the internet and information dissemination make it more risky. And the risks emanate and go to Beijing much sooner. And the consequences of how they're handled are much greater, so the risks are magnified."

The way this dispute was handled was with a compromise; the Southern Weekly journalists would go back to work and wouldn't be punished for striking, and the censors would back off a little.

But, at the same time, some protesters have been arrested and some people who made comments online are being threatened with charges of subversion. And a Beijing newspaper, the Beijing News, had to buckle under the pressure of censors, when it tried to make its own stand.

"All the support that came this week showed journalists it's worth fighting. They can hold on to that as they go forward."

Li's done a little fighting of his own. He says even though he's retired, he'd been getting regular visits from the Public Security Bureau. They'd tell him they were monitoring his phone calls, and would sometimes block him from giving interviews.

Finally, a few weeks ago, he says, he blew up at them. He told them they were shameless, and if they didn't stop their harassment, he'd write an open letter detailing everything they'd been doing.

Chuckling, he says, they haven't been by since.