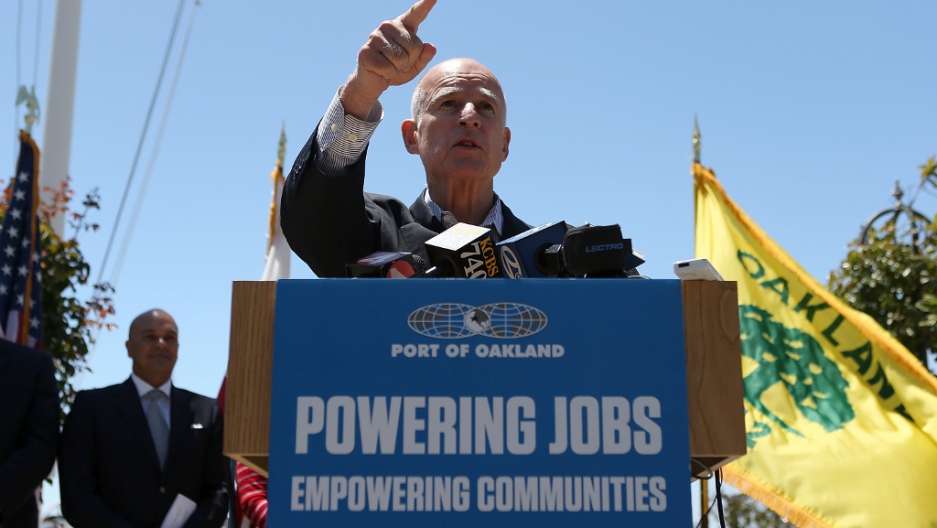 California Governor Jerry Brown at a press conference July 9, 2012 in Oakland, CA. Governor Brown effectively reined in spending and made the state solvent for the first time in years.
Credit: Justin Sullivan
Share

Back in November I was interviewed by Joe Weisenthal at Business Insider. One of my comments during our discussion on state and local governments was:

"I wouldn’t be surprised if we see, all of a sudden, a report come out, 'Hey, we’ve got a balanced budget in California.'"

And today from Reuters: California governor's budget has surprise: a surplus

The state expects $98.5 billion in revenues and transfers and plans [on] spending $97.7 billion, according to the proposal published on the state Department of Finance website.

That leaves a surplus of $851 million for the year, in addition to a projected $785 million surplus for the current fiscal year, which ends in June, allowing the state to put $1 billion toward a rainy day fund.

Brown said he saw a balanced budget for the next four years.

Spending in the upcoming year is set to rise 5 percent, or $4.7 billion, from the current 2012-13 budget. Schools and universities will see a $4 billion boost, health care spending will rise $1.2 billion, while transfers to local government will drop $2.1 billion.

This is a tentative surplus, and there is plenty of debt, but this is another small positive step. The plan in California is to increase spending slightly in the upcoming year after several years of budget cuts.

As I mentioned in the previous post, moving from state and local budget cuts to some small increases will be a plus for the economy.