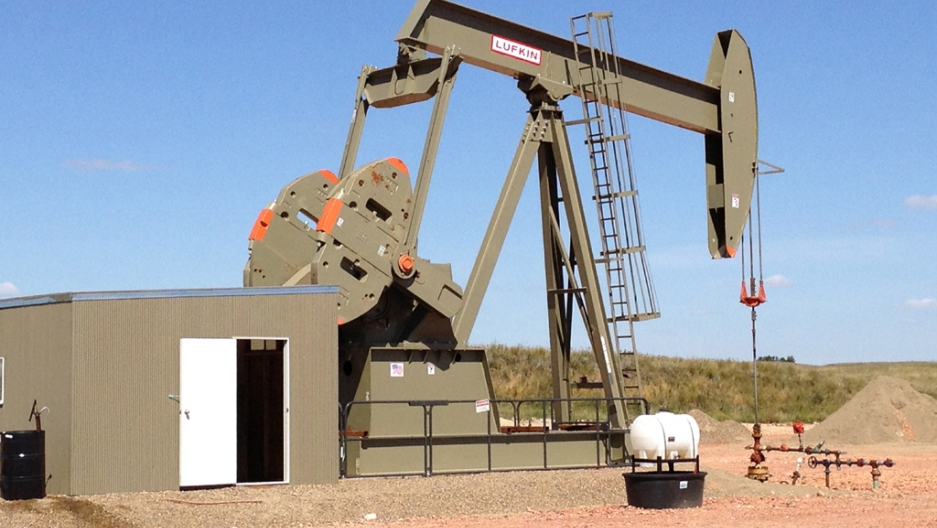 An oil pump jack is seen in this Aug. 16, 2012, photo taken near Tioga, N.D. Last year the state generated a record 152 million barrels, and more than 80 percent of it was Bakken derived. For 2012, North Dakota's output is projected to surpass that of California (196 million barrels) and possibly even that of Alaska (209 million barrels), lagging behind only Texas (533 million barrels).
Credit: Mark Schmeets
Share

US oil production topped 7 million barrels per day for the first time since March 1993, a figure that is nearly 20 percent above the amount produced at this time last year.

The latest weekly data from the Energy Information Administration (EIA) highlights how the growing role of the US as a major energy producer is changing the dynamic of the energy market. As domestic production rose, US imports for the week ending Jan. 4 fell to 7.9 million barrels per day — a number that is close to 16 percent below the level imported in the same period last year.

US oil output continues to accelerate at a surprising rate, and the government's short-term energy outlook predicts that the US industry could pump 14 percent more oil this year alone. The use of unconventional drilling techniques in places like North Dakota and Texas has created an explosion in US production to the point where the US is expected to surpass Saudi Arabia in crude production by 2020, according to International Energy Agency statistics.

At the same time, the industry is developing more pipeline capacity to carry landlocked US crude from storage in Cushing, Okla., to the Gulf Coast refining areas. According to the EIA, these developments should continue to drive the trend, create more refined product for the US and export markets, and bring down some oil prices in the next several years.

In the next few days, a significant pipeline expansion is due as the Seaway pipeline adds 250,000 barrels a day in capacity from Cushing to its current 150,000 barrels. In anticipation of the move, the market has compressed the spread between US-produced West Texas Intermediate and the international bench mark Brent crude to about $18 — the narrowest level since September.

"There's high hopes for what this Seaway pipeline will do for the WTI market, and that spread. There's a lot of expectations around that right now," said John Kilduff of Again Capital.

On Wednesday both WTI and Brent were trading lower, with WTI coming in just above $93 per barrel. EIA oil and refined product inventory data showed an increase in crude inventories of 1.31 million barrels for the week. Gasoline stocks, however, showed a surprisingly steep increase to 7.4 million barrels.

The EIA short-term outlook, released Tuesday, included raised expectations for 2013 and its first forecast for 2014.

"We were having trouble getting oil to market because of that bottleneck in Cushing, and that's one of the things that the pipeline is supposed to help," said Gene McGillian, analyst with Tradition Energy. McGillian said the oil market also has its eye on Washington, and trading has been more volatile as a result.

"The idea that the spending cuts and the debt ceiling weren't dealt with keeps the market focused on economic issues," he said.

Andrew Lipow, president of Lipow Oil Associates, said Seaway is the first of several pipelines that will change the flow of oil.

"By the end of the first quarter, we expect pipelines from Magellan LP and Sunoco Logistics to be on line," said Lipow. "By the end of 2013, we should have the Keystone XL Southern leg in service from Cushing to the Gulf Coast.

The flood of new oil coming to the Gulf Coast could compete with Louisiana Light Crude, used in refining, and priced closer to Brent, said Kilduff.

"The question is whether the impact of all this crude coming into the Gulf Coast, is it going to be enough to top over demand for Brent? Will it be a tipping point?" said Kilduff. "The way these numbers keep going up and up, it seems like it could."

Kilduff said that would depend on how the impact of the Midwest crude filters through to the east coast, since the east coast refineries have run on oil based on Brent prices.

"The question is whether WTI rises to the Brent price, or Brent falls down toward the WTI price," said Kilduff. "Right now, it appears the WTI is rising toward the Brent. The focus now is on what this pipeline is going to do to drain the bottleneck in Cushing."

Brent has historically traded below WTI, but in the last several years it's been at a premium because of Middle East tensions, declining production in the North Sea, production disruptions in Africa and mostly the bottleneck in Cushing.

Kilduff added that the Saudis have also increased supplies to their jointly owned Motiva refinery in Texas, and that supply will also hit the Gulf Coast market.

The US became a net exporter of refined products in 2011 for the first time since 1949.

Lipow said the US refineries are running at historically high levels for this time of year, and he thinks pump prices could fall to a low this year of $3.10 per gallon. According to AAA, the national average is $3.30 per gallon for unleaded regular gasoline, up slightly from $3.29 a week ago, but down from $3.47 a month ago. His expectation is that the year high will be $3.70.

CNBC: In picking Lew, Obama turns a page at treasury