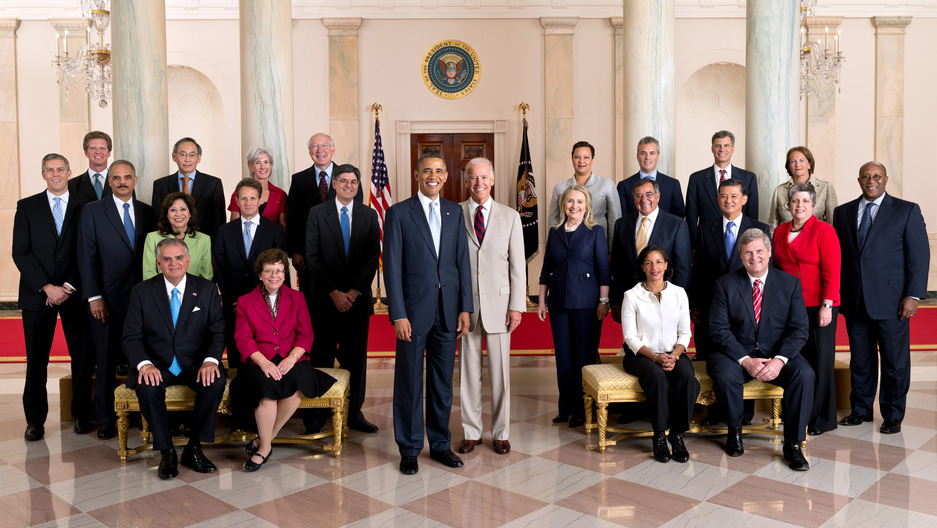 President Barack Obama's first Cabinet Administration has a number of women and people of color, but his nominations for his second administration have been less diverse. (Photo by Chuck Kennedy/White House.)

This is the season for a changing of the guard in Washington.

Senator John Kerry will replace Hillary Clinton as Secretary of State and Chuck Hagel has been picked to be the next Secretary of Defense. John Brennan has been tapped to lead the CIA, while Eric Holder is staying on as attorney general and Kathleen Sebelius will stay on as secretary of health and human services.

But among the new faces, Kerry, Hagel and Brennan so far, is no one of color, nor any women.

Hilda Solis, the labor secretary and another woman, also resigned on Wednesday, though no replacement has yet been named.

Marie Wilson, founder of the White House Project, a New York-based nonprofit group, has spent her career advocating for women’s leadership in the highest echelons of government. And she's critical of the choices President Barack Obama has made for his new administration.

"President Obama has really, really competent women in very different positions, so I think this is a surprise," she said.

Wilson said she and others in her circle had been hoping the new administration would include more of those high-powered women, like Michèle Flournoy, a former undersecretary of defense.

in Obama's first term, women assumed key roles. The disappointment now, she said, is not that there won't be women — there will, including Sebelius, Homeland Security Secretary Janet Napolitano — but these top position, state and defense, for example, will be going to white men.

"We have so much research about the value of diversity when making decisions," Wilson said. "And the decisions that we need the best decisions on are those three areas (foreign policy, the military and counterterrorism)."

Not to have more diversity at the table there, Wilson said, is a loss for the country.

"I don't understand it," she said.

Wilson points out that women, and especially women of color, were responsible for Obama's electoral victory, to a great degree.

It would be good, she said, if there were more women bringing diverse perspectives to the table.

"These are the appointments that really do make a significant change," she said. "When you're dealing with other countries and the international deals have to do with the status of women in those countries, and more and more women are in positions of power in those countries, it's great to have a woman leading these things."