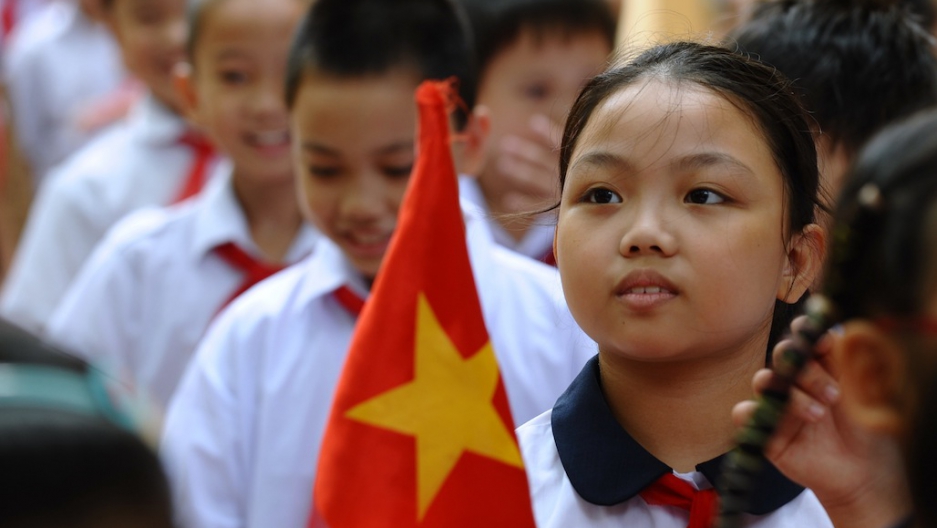 A Vietnamese girl holds a flag during a ceremony at a local elementary school in downtown Hanoi on September 5, 2012.
Credit: HOANG DINH NAM
Share

An eighth-grade Vietnamese girl has been suspended for one year over a Facebook post parodying a 1946 speech by revered freedom fighter Ho Chi Minh, the news outlet Thanh Nien reports.

It's a decent parody, especially for a middle schooler. It adopts Ho Chi Minh's revolutionary tone and, in lieu of stoking an uprising against the colonial French, vows resistance against exams.

This is an excerpt from Ho Chi Minh's original 1946 speech: "We have made concessions. But the more concessions we make, the more the French colonialists press on. Never shall we be enslaved. Our resistance war will be hard and protracted but certainly successful."

Here's the girl's Facebook post via Thanh Nien: "As we desire peace, we have made concessions. But the more concessions we make, the more the teachers press on, for they are bent on failing us once again. No, we would rather sacrifice all than be dismissed."

The school's authorities tell Thanh Nien the girl is guilty of “insulting her school and teachers” and “distorting history.”

But isn't this the sort of kid you wanted to sit next to in home room?

The girl claims she isn't the parody's author and that she was just one of many who helped circulate it around Facebook. Keep in mind that she didn't spray paint some offensive screed on the school auditorium. She simply posted a goofy joke on Facebook. That's the 21st-century version of passing notes.

Now she's suspended for one year, a fairly grave setback in an exam-obsessed education system in which student compete vigorously for top university slots.