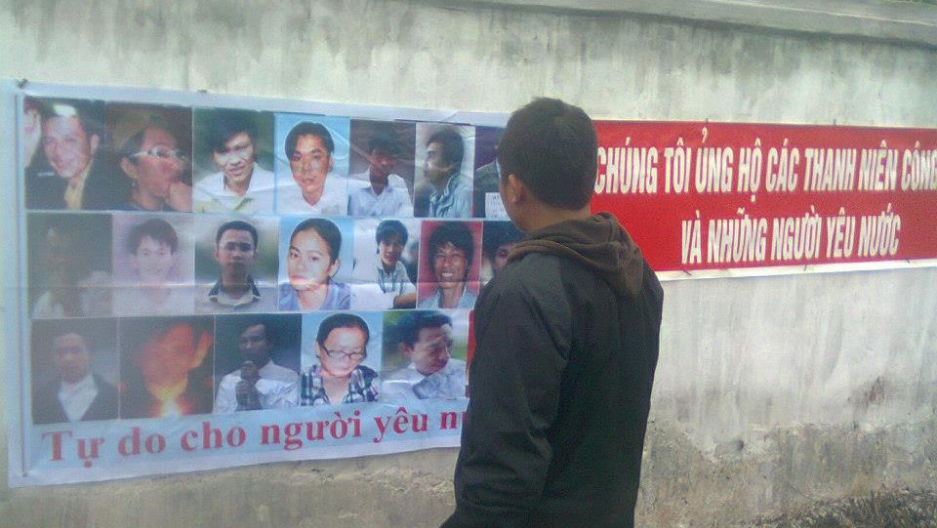 A man looks at a banner representing the 14 activists convicted on January 9th in Vinh City, Vietnam. Source: thanhnienconggiao.blogspot.com
Share

Fourteen bloggers were convicted of "anti-state" crimes today in the central Vietnamese city of Vinh, after a swift two-day-trial that many human rights defenders have been swift to condemn.

Thirteen of the convicted were given jail sentences between three and 13 years, coupled with house-arrest sentences of varying lengths. Twelve of the convicted are men, and two are women, while the majority are affiliated with the Catholic church, according to Human Rights Watch sources.

"I pray and hope that soon the society of Vietnam will have truth and justice. I fully accept and will endure any and all suppression under this regime," said 24-year-old Catholic activist Tran Minh Nhat in his final testimony on Wednesday, which was posted on the Thanh Niên Công Giáo blog.

The activists were convicted under Vietnam's Penal Code Article 79, targeting those "carrying out activities aimed at overthrowing the people’s administration." Those convicted under Article 79 can be subject to penalties as harsh as life imprisonment or capital punishment.

The fourteen convicted have been held since 2011 on charges of association with Viet Tan, the Vietnamese Reform party — a group which Vietnam officially considers to be "terrorist."

For its part, Viet Tan wrote in a press release today that "by persecuting these individuals for their peaceful expression and political advocacy, the Hanoi regime has shown once again its fear of civil society."

The group also claims that some supporters of the convicted were attacked by police and detained while attempting to gather outside the trial.

Human Rights Watch called for the immediate release of the 14 activists, and doubled down on their support for prominent blogger Le Quoc Quan, who was arrested in late December.

“To misconstrue the activities of the activists as trying to overthrow the government is baseless – they have been imprisoned only for exercising their right to freedom of expression,"  said Rupert Abbott, Amnesty International’s Researcher on Viet Nam in a press release.

The US Embassy in Hanoi commented in a statement that the convictions were "inconsistent with Vietnam’s obligations under the International Covenant on Civil and Political Rights, as well as the provisions of the Universal Declaration of Human Rights relating to freedom of expression and due process."

Vietnam appears to be in the midst of a crack-down on dissident bloggers, a new development that has many Vietnamese activists worried — and the potential repercussions for international investment in this swiftly-growing Southeast Asian power remain as yet unseen.

"What we are seeing is an effort to control and constrain an increasingly restive citizenry that is empowered by internet delivered information," said Phil Robertson, deputy Asia director at Human Rights Watch.

"The way this is happening is the authorities are systematically targeting and persecuting those who speak out loudly, who have institutional backing in Vietnam or overseas, and those who prove to be popular purveyors of on-line news that raises sensitive issues. "

Human Rights Watch states that at least 31 dissidents and activists were sentenced to prison in Vietnam during the first nine months of 2012 "for exercising their rights to freedom of speech and freedom or organization enshrined in the Vietnam Constitution."