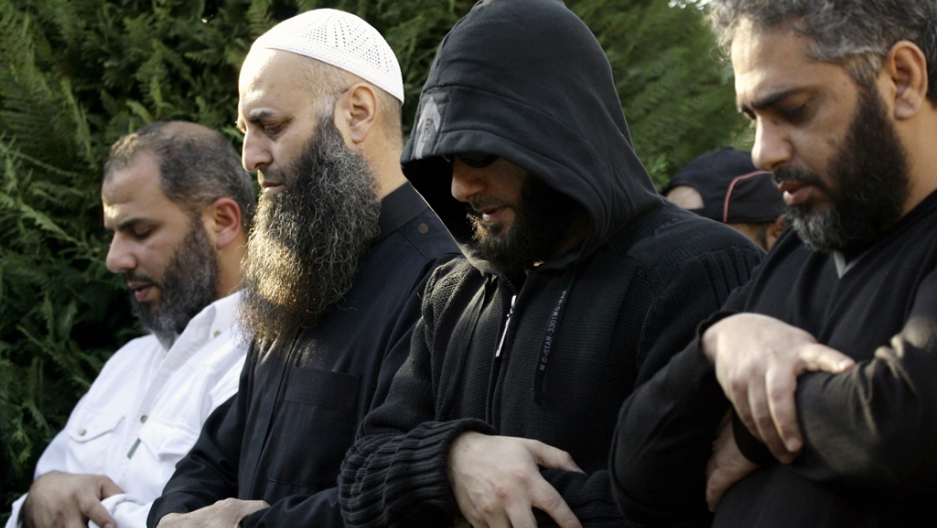 SIDON, Lebanon — A few weeks ago, when the Syrian government returned the mutilated bodies of several Lebanese fighters who had crossed the border to fight with the rebels, a famous face was there to greet them.

It wasn't a senior member of the government who welcomed home the “martyrs,” as one might expect. The official line in Beirut is still one of “disassociation” from the Syrian conflict.

Instead it was an ultra-conservative Salafist Muslim leader who has gone from obscure preacher to household name in less than two years.

Assir is now the most high-profile of Lebanon's Salafists — an ultra-orthodox branch of Sunni Islam. His status is buoyed by the neighboring war in Syria, which has devolved into a mostly sectarian fight between Sunnis and Shiites.

The sheikh's core message resonates with a broadening segment of society, and though he is still considered an eccentric outsider by many, he is attracting increasingly mainstream followers.

Assir’s message is that Sunnis have suffered indignities — both at the hands of Syria as well as Hezbollah, the Shiite militia and political group based in southern Lebanon — for far too long, and that Lebanon's elected leaders are useless.

A recent clash here in the sheikh's hometown, on the southern coast of Lebanon, showed that his supporters are willing to confront Hezbollah on a level not previously seen before.

Residents of Sidon were shocked in November when their otherwise quiet town suddenly fell into sectarian bloodletting. It seemed a gloomy harbinger of things to come if even this obscure byway in the Middle East could be darkened by the Syrian conflict.

A gun battle between the sheikh's men in Sidon and Hezbollah militants claimed three lives. Two of Assir's closest bodyguards were killed. The local Hezbollah commander and his bodyguard were wounded. A 14-year old Egyptian boy was killed in the crossfire.

Lebanon’s sectarian tensions were already rising before the Syrian conflict, occasionally prompting armed clashes in the cities of Tripoli and some areas of Beirut. Hezbollah effectively forced Sunni politicians and their supporters aside in 2008, consolidating government power among its allies.

But the Syrian conflict, largely being fought between Sunnis and Alawites — an offshoot of Shiite Islam to which Syrian President Bashar al-Assad belongs — has brought new pressure on the festering resentments in Lebanon. Hundreds of Lebanese were killed and injured last year in Tripoli clashes related to the war in Syria.

Many of Assir's most ardent supporters are engineers and lawyers, post-graduate students and businessmen — a group that lends credence to the sheikh's efforts.

At nearly every public appearance he has made over the past year, a famous pop star named Fadl Shaker, who recently traded in his lucrative career as a crooner for the pious life of a Salafi, has been at the preacher's side.

Assir has also capitalized on the growing disconnect between disgruntled Sunnis and Lebanon's weak political leadership. Moderate Sunni leaders are now scrambling for his approval, and parliamentary elections scheduled for June have accelerated their efforts to woo popular Salafi leaders like him.

For two years now, the bombastic Assir has stepped up his verbal attacks on Hezbollah, which he calls "the party of Iran" — a reference to the group’s close relationship with the Islamic Republic — and the group's steadfast support for Assad.

"How can Hezbollah claim to defend the dignity of all Muslims when they support the murderer Assad?" Assir asked at his office. Several days after the Sidon gunfight, he called his dispute with Hezbollah a "blood feud."

Assir has managed to appeal to Lebanon's everyday Sunnis, a population to whom secular mainstream politicians have struggled to remain relevant.

Perhaps the starkest evidence of this can be seen in Sunni areas of Tripoli, Lebanon's second largest city. Sunni gunmen from the Bab Tabbaneh neighborhood frequently battle with Alawites who are close with the Assad regime.

In the past, flags of various Sunni political parties and portraits of former Prime Ministers Rafik and Saad Hariri could be seen on almost every block. Today these have largely been replaced with the black flag of the Salafis and the revolutionary flag of Syria adopted by the rebel Free Syrian Army.

The area surrounding Assir's Bilal bin Rabah mosque in Sidon, close to the bloody November clash, now has the feel of a fortress, with a wide security cordon and heavily armed guards.

"They have killed my friends and they will be back to kill more of us," said Adnan, a young follower of Assir who was shot during the altercation. As he fought back tears, he added: "This is only the beginning of a very long fight."

A woman whose apartment was shot up during the gunfight said the incident caught everyone off guard.

"We are mixed in this building half and half [Sunni and Shiite], we are raised together, we are used to them and they are used to us," she said. "All my neighbors are my family."

But she worried that things are changing for the worse: "If I had the opportunity to leave the area, I would."