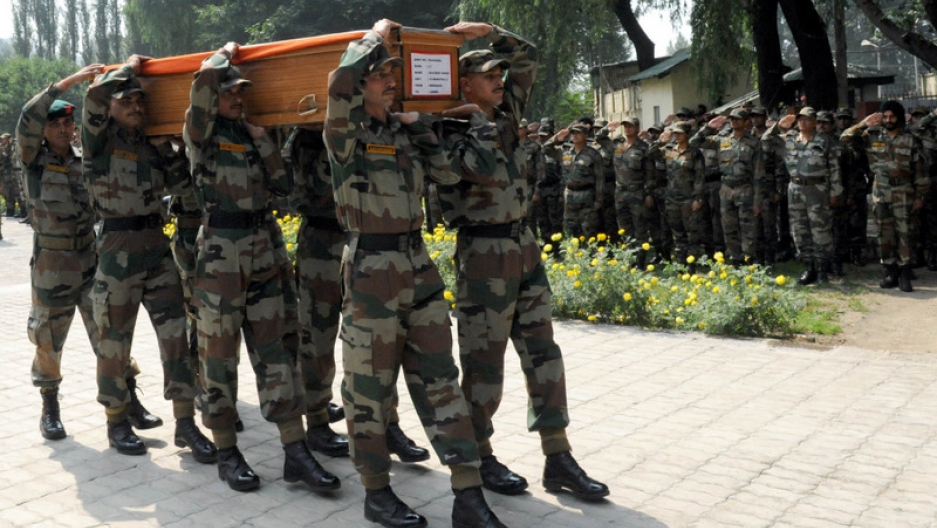 Indian army soldier carry a coffin containing the body of a army officer during a wreath laying ceremony after in Srinagar on August 21, 2011. An Indian army lieutenant and a dozen suspected militants were killed on August 20 in a clash along the de facto border that splits Kashmir between India and Pakistan, the army said. The fighting erupted in the northern Gurez district when a group of "heavily-armed militants tried to infiltrate" Indian Kashmir from the Pakistani zone of the divided Muslim-majority territory, said an Indian army spokesman."
Credit: ROUF BHAT
Share

Pakistan called for an independent investigation into the incident Wednesday, saying that they are prepared to hold investigations through the UN Observer Group for India and Pakistan, which has people on the ground on both sides of the conflict, according to the Hindustan Times.

The request for an inquiry comes after Pakistani foreign minister Hina Rabbani Khar told reporters in Islamabad that her country "does not believe in tit-for-tat killings," the Hindustan Times reported.

A military official said Pakistan had verified the facts on the ground and found "nothing of the sort" had happened.

The soldiers' deaths have renewed tension in the region, especially after one of the dead men was found beheaded and badly mutilated on the Indian side of the border, according to reports.

Though the Indian army maintains that the soldiers died after a firefight erupted along the Line of Control, part of the contested India-Pakistan border in Kashmir, a senior Pakistani official said Pakistan's troops were not responsible for the attack, AFP reported. The official did not specify whom he believed to be responsible.

Instead, Pakistani officials claimed that the allegations were Indian propaganda, part of a conspiracy to distract the world's attention from an earlier incident in which a Pakistani soldier was killed by Indian troops, Reuters said. India has denied that its soldiers crossed the border, or that they killed the soldier.

On Wednesday, the two countries continued to trade accusations.

GlobalPost senior correspondent in New Delhi Jason Overdorf said that despite the recent cease-fire, periodic exchanges of fire are routine across the "Line of Control" that separates Indian- and Pakistani-administered Kashmir.

"But the ill-timed beheading of an Indian soldier by marauding Pakistani troops has likely put paid to the peace process — which has already been running on fumes," Overdorf added.

Indiana University and expert on the conflict Sumit Ganguly told GlobalPost that the so-called peace process died a long time ago.

“The way out is to ignore Pakistan for the next 20 years and focus the country's energies on tackling a plethora of domestic problems,” Ganguly said.

Two of the three wars that India has fought with Pakistan since the two countries gained independence from Britain in 1947 have been over Kashmir. The latest, the so-called Kargil war, was fought as recently as 1999.

But despite the alleged incursions by Pakistani soldiers and the beheading, not to mention the rancor lingering in India over the Nov. 26, 2008, terrorist attacks on Mumbai, there is little chance that the end of the peace process will mean a move toward a real shooting war.

“It is highly unlikely that this spat will lead to a Kargil-like scenario,” Ganguly told GlobalPost. “At worst it will lead to more skirmishes. With a very weak PM at the helm, a foreign minister eager to do his bidding and with plenty of domestic woes, India will do all to tamp down on possible escalation.”

For Indians, the beheading was unexpected, marking a return to a level of brutality not seen since the Kargil war.

India summoned the Pakistan envoy to Delhi to speak with its foreign minister following the alleged incident. Though Salman Khurshid said that Pakistan's envoy had been "spoken to in very strong terms," he warned against further escalations between the two countries, AFP reported.

“Whatever has happened, should not be escalated. We cannot and must not allow for an escalation of a very unwholesome event that has taken place,” Khurshid said during a press conference.

Shortly after India's accusations, Pakistan Chief of Army Staff General Ashfaq Parvez Kayani emphasized the need for the army to remain fully prepared to respond "the full spectrum of threat."

Kashmir is a Himalayan region that India and Pakistan have both claimed since gaining independence from Britain in 1947. The British allowed the state, formally known as Jammu and Kashmir, to choose whether it wanted to be a part of India or of Pakistan. Though Kashmir had a majority Muslim population that favored acceding to Pakistan, the leader of the state was a Hindu. He opted to join India, handing powers over to the central government in New Delhi in exchange for military protection.

After the first war, the UN adopted a resolution calling for a referendum that would allow the people of Kashmir to choose which country they wanted to join, but the vote has never been held.