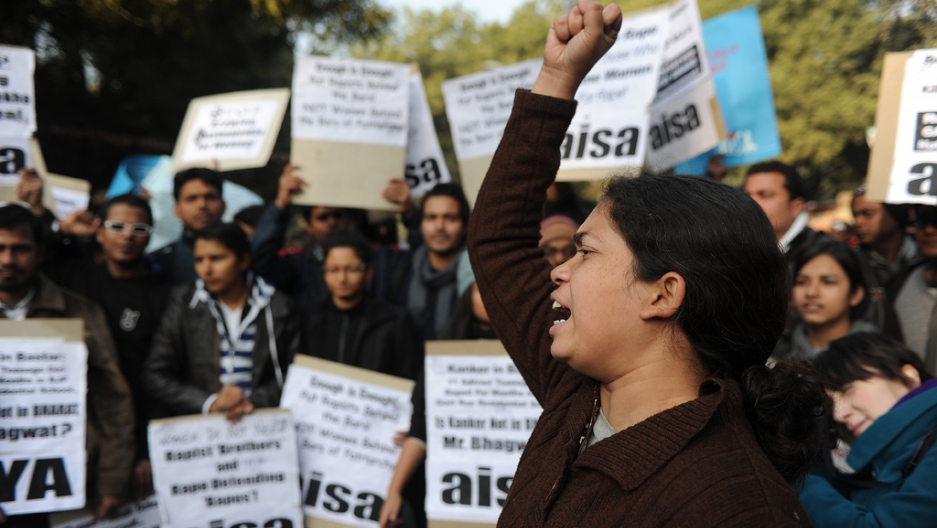 Indian students shout slogans against Indian spiritual guru Asaram Bapu during a protest in New Delhi on January 8, 2013. Asaram sparked a backlash Tuesday after saying a 23-year-old student could have averted a murderous gang-rape by begging for mercy from her attackers.
Credit: Sajjad Hussain
Share

NEW YORK — The brutal rape and ensuing death of a 23-year-old woman in Delhi — now known as Damini (“lightning” in Hindi) — along with concurrent massive civil society mobilization in India around these events, has ignited a flurry of speculation and analysis within Western media about why India is such a dangerous place for women.

This quest for causal answers has led to a tried and tested theory about India’s “patriarchal culture,” where Indian men are characterized, as Libby Purves put
it recently in the Times of London, by a “murderous, hyena-like male contempt” towards women. Leaving aside the blatantly problematic metaphor of Indian men as scavenging animals, Sonia Faleiro’s New York Times op-ed lamented that legal measures against rape in India “have been ineffective in the face of a patriarchal and misogynistic culture.”

Attention to India’s “patriarchal culture” occludes the prevalence of rape and other forms of violence against women throughout the entire world.

According to the World Bank, more women between the ages of 15-44 are killed or disabled as a result of gender-based violence than cancer, car accidents, malaria and war combined. In the global epidemic of violence against women, the United States is no exception. The Centers for Disease Control and Prevention estimate that 1 in 5 American women will be raped in her lifetime, and the US Department of Justice reports more than 300,000 American women are raped each year. In 2011, India, a country whose population is four times greater than the United States, had 12 times fewer reported rapes.

If police officials in India fail to take rape survivors seriously, American law enforcement is not so far behind. The Federal Bureau of Investigation crime data reveals only 24 percent of reported rapes result in an arrest in the United States, a rate far below that of other violent crimes such as murder (79 percent) and aggravated assault (51 percent). These statistics show that our own country displays hostility towards women that is similar to India.

This astonishing reduction of India’s issues with gender-based violence to a vast and unchanging patriarchal culture also obfuscates significant differences within India regarding violence against women. What is perhaps most surprising about Faleiro’s analysis of India’s “patriarchal culture” is that it directly follows a description of her move from Delhi to the relative freedom of Mumbai, leaving one to wonder if Mumbai has somehow escaped the overwhelming patriarchy of the rest of India, and if so, how.

Perhaps Mumbai has achieved the true cosmopolitanism that Indian journalist Manu Joseph pines for in her critique of “village mentalities?” But then again, Mumbai is also the city where a 20-year-old Nepali woman was gang-raped by three men on December 22, and a 15-year-old physically challenged girl was raped by her father in the supposed safety of her own home. Mumbai, like the rest of India, is a complicated place, and like other Indian cities, boasts higher rates of violence against women than India’s villages.

According to India’s National Crime Records Bureau (NCRB), Indian cities are far more dangerous places for women than Indian villages. Delhi, the city where Damini once lived and studied, is no longer simply India’s political capital, but has also achieved the dubious distinction of becoming its “crime capital” in rates of violence against women.

Reports from the National Family Household Survey, which arguably provides a more accurate picture of actual rates of violence than the reported numbers available through NCRB, also confirms that city-dwelling women are more likely to face intimate forms of abuse than women living in villages. India, after all, is the country where sex ratios are most skewed toward males among the wealthy and educated in urban areas that boast India’s greatest “modern” accouterments.

This uneven landscape, where violence against women is simultaneously prevalent throughout the world and notably higher in the industrialized, urban centers of developing countries than their ostensibly “backwards” hinterlands, should make us all pause. Gender-based violence is a complex phenomenon, with multiple causes and social manifestations, and does not lend itself to facile theorizations about “patriarchal culture” and “village mentalities.” This reduction not only ignores the facts, but also is dangerously misleading.

The terrible events that unfolded in Delhi, events that sadly could have and do happen in other parts of the world, were made possible by its peculiar position of modernity. Delhi is a city that houses enormous inequalities, much like many US cities, and has undergone rapid and uneven change that leaves residents no longer agreeing on shared norms of social conduct. It is a place where the wealthy increasingly abandon the public sphere in favor of highly fortified, private enclaves, leaving women and other marginalized groups vulnerable to violence.

The silver lining on this otherwise dark cloud is that Delhi is also a place where gross violations of human rights have a chance of making it onto the public agenda. We’ve seen the public decry social and political complacency through the numerous demonstrations held across India in the wake of Damini’s death. The degree to which this mobilization will lead to concrete change remains to be seen, but that India is a changing nation is certain. No matter how much we may wish the global reality of violence against women were different, and that we may possess the key to its end, we would do well to take a step back and reassess our initial impulses about where the roots of the problem lie.

Poulami Roychowdhury is a Ph.D. candidate in the Department of Sociology at New York University. Her research focuses on law and gender violence in India.

Research for this article was conducted by Mandy Van Deven, writer, advocate, and online media strategist. Her work exploring contemporary feminisms, global activism, and sexuality has been published in The Guardian, Salon, AlterNet, and Marie Claire.