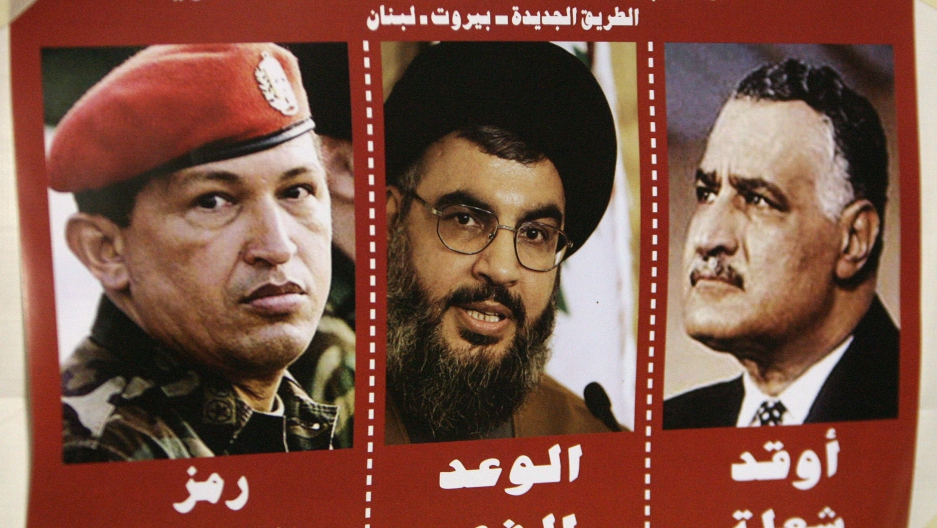 Editor's note: This is part of a series on the alleged spread of Islamic terror cells in America's "backyard." See part one here.

That deadly serious question is increasingly troubling foreign policy and security experts as the South American country and Iran — which funds Hezbollah — move ever closer.

Despite deep cultural differences, a shared antagonism toward the US has drawn Venezuelan President Hugo Chavez and his Iranian counterpart, Mahmoud Ahmadinejad, into an unlikely political friendship in recent years.

"Iran is an example of struggle, resistance, dignity, revolution, strong faith," Chavez said during one early visit to Tehran.

"We are two powerful countries. Iran is a power and Venezuela is becoming one. We want to create a bipolar world. We don't want a single power [i.e., the US]."

Beyond the rhetoric lies a strategic alliance that has seen Caracas, along with Damascus and Havana, vote against United Nations sanctions on Iran over its nuclear program, and increasing Iranian investment in the Venezuelan economy, now worth more than $5 billion.

All of that is very public.

But, according to critics such as veteran US Republican Latin Americanist Roger Noriega, Venezuela is also providing operational support to Hezbollah, the Lebanese-based organization classified as terrorist by the US, UK and other allies.

It even came up in November’s US elections, with the Republicans claiming in their official online party platform: “Venezuela has become a narco-terrorist state, turning it into an Iranian outpost in the Western hemisphere.”

The GOP did not respond to GlobalPost’s requests for comment. But its claim was questioned — and even ridiculed — by several security experts in Israel and South America contacted by GlobalPost.

“That is exaggerated. Generally, this kind of activity [terrorism] is conducted by small units. It is political rhetoric,” said Ely Karmon, one of Israel’s top independent counter-terrorism experts.

Nicholas Watson, a senior analyst at British firm Control Risks, who specializes in South America, agreed, describing it as “unhelpful.”

He added: “That kind of rhetoric, the blatant accusations, doesn’t help the US’ position in the region. It actually plays into Chavez’s hands and strengthens him within Venezuela.”

That Hezbollah has been active in Latin America is hardly news. Argentine investigators have linked the group to two deadly bombings in Buenos Aires in the 1990s.

Together, the attacks on the Israeli Embassy and a Jewish cultural center killed 114 people. One of five Iranians wanted by Interpol over the second bombing, Ahmad Vahidi, is now Iran’s defense minister.

Last year, he had to make a rapid departure during a state visit to Bolivia when Argentine prosecutors requested Bolivian police arrest him.

Meanwhile, according to the Council on Hemispheric Affairs, a Washington, DC, nonprofit research group, there's growing evidence that Hezbollah is infiltrating other parts of Latin America, taking advantage of widespread corruption and drug trafficking to raise funds for its activities in the Middle East.

The Buenos Aires attacks took place years before Chavez, now cancer-stricken but recently re-elected, came to power in Venezuela. He was even in jail, awaiting trial for his role in a failed coup, at the time of the first bombing, on the Israeli embassy.

Nevertheless, a jigsaw of data, put together by everyone from Karmon to Manhattan District Attorney Robert Morgenthau, paints a disturbing picture of apparent bilateral cooperation in areas such as Iran’s outlawed nuclear ambitions and the Venezuelan military’s adoption of Tehran’s defense doctrine of “asymmetrical” warfare; in other words, guerrilla resistance to a potential US invasion.

Now canceled, there was also a secretive weekly flight from Caracas to Tehran, with a stopover in Damascus, operated jointly by Iran Air and Conviasa, the state airlines in Iran and Venezuela respectively. Karmon and others say the passengers did not pass through customs.

Meanwhile, Venezuela’s Lebanese-born Interior Minister Tareck El Aissami — who was previously in charge of the country’s passport office, fueling the Republican claim of papers being given to Islamic terrorists — makes no secret of his sympathies.

“I’m also the son of Arabs, I’m Palestinian, I’m Iraqi, and today we are the resistance force,” he said at a 2009 event in support of Palestinians in Gaza.

“There are Hezbollah supporters in the Venezuelan government. They have been neither investigated nor fired. They have been kept in their jobs,” said Roman D. Ortiz, director of Bogota-based security consultancy Decisive Point.

But does that translate into the Chavez government arming or providing training facilities or other logistical support to Hezbollah?

“The existence of a Lebanese community [in Venezuela] plus a left-wing populist government plus the anti-American rhetoric does not equal terrorism,” says Control Risks’ Watson. “That is speculation.”

Decisive Point’s Ortiz suggests the US needs to focus its intelligence work south of the Rio Grande more closely on the activity of Iran and Hezbollah and prioritize the issue in relations with Latin America.

Watson agrees, while backing the White House’s policy of “restraint” on this issue. He also notes how the George W. Bush administration’s backing for the failed 2002 coup against Chavez means that the Venezuelan leader’s warnings of a possible US attack rings anything but hollow in his homeland.