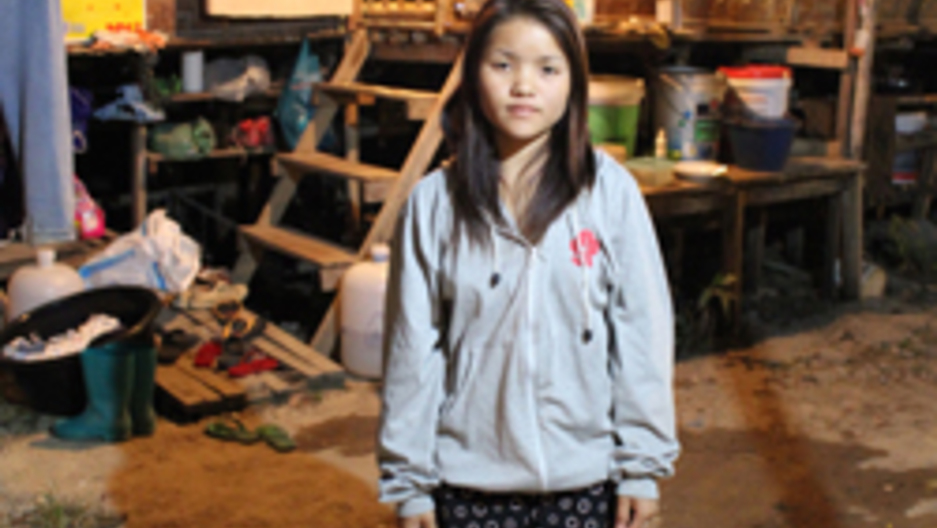 For Thailand's estimated 2.5 million migrant workers, 2013 has new bureaucratic hurdles, and promise of a higher minimum wage beyond them.

The new year brings new opportunities and new challenges for low-wage workers in Thailand. On January 1st, the country's minimum wage was raised to 300 baht–or about $10-a day.

Migrant workers from neighboring countries like Myanmar, Cambodia, and Laos make up as much as 10 percent of Thailand's workforce. They should be eligible for the pay bump, if they can prove they're in the country legally. For workers like those in a worker camp in the San Kham Pang district 30 minutes east of downtown Chiang Mai, that just got a little harder.

About 300 people live here, almost all of them from Myanmar's Shan State, a five-hour drive north. The camp is set in a field between two blocks of new townhouses. The people in the camp are building the townhouses.

Sai Tun Kyai lives at the end of a row of huts. He moved here from Shan State about two years ago.

He got a work permit soon after he arrived–Thailand has offered these to undocumented migrants on and off since the early 90s. Through an interpreter, he says his employer dropped the ball, his permit expired, and he missed the December 14th deadline for Nationality Verification.

"Right now I'm really confused," he says. "Because my work permit's expired, I'm basically illegal. If the police find me, will they arrest me? Will they send me back to the border? I don't know what to do."

He's not alone. There are around two-and-a-half million migrant workers in Thailand. About three quarters are from Myanmar, also known as Burma. Most are manual laborers–construction and agriculture around Chiang Mai, fishing and factories elsewhere.

Less than half of them met the December 14th deadline that would make them eligible for the new minimum wage, national health benefits and schools. For the million-and-a-half workers who didn't meet the deadline, there's confusion: It's been reported that the government will extend the deadline, but at the same time the Thai government has been threatening crackdowns and deportations.

18-year-old Nong Foung lives near Sai Tun Kyai. She pours concrete at a construction site seven-days-a-week. Since her work permit expired earlier this year, she hustles between home and the site, she's afraid to go anywhere else.

A couple months ago, immigration arrested seven people from her worksite. She laughs a bit when she talks about escaping into nearby woods to avoid being picked up.

Andy Hall, a migration researcher and worker advocate at Mahidol University in Bangkok, says that giving migrants a way to work legally is good.

"The process in itself in theory is a good process—to legalize the workers. It's an original process which we haven't seen anywhere else in the world."

In practice, though, Hall says corruption reigns–government agents demand kickbacks and funnel applicants to private, unregulated brokers. He says a process which should cost 30 dollars can end up costing closer to 500—three months wages for a typical worker. The Thai Labor Ministry didn't respond to questions about these points.

Thai business groups, the Myanmar government, and international workers groups have pressed for a deadline extension. The promised crackdown hasn't materialized yet. In the past, Hall says, similar crackdowns have opened up an extortion bonanza.

Thailand's policy is evolving as the whole region prepares for 2015's economic integration of ASEAN—a European Union-style collaboration between 10 Southeast Asian countries. Integration will make moving between countries easier for some workers, although mostly in highly-skilled jobs.

Jackie Pollock, who directs Chiang Mai's Migrant Assistance Program, does see it having a less tangible benefit for the low-skilled workers her group helps.

For the moment, though, many are just focused on cementing their identity as legal, migrant workers.