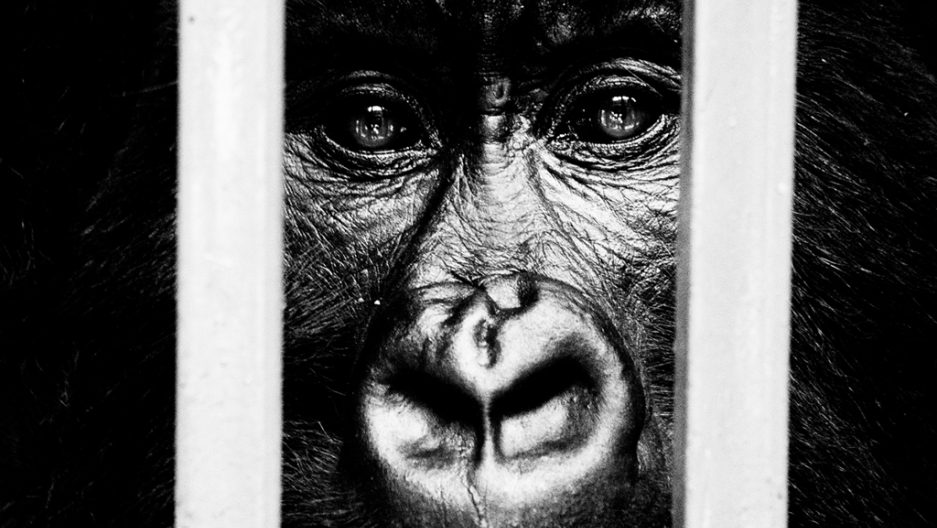 A gorilla at the Senkwekwe Orphan Mountain Gorilla Center in Virunga National Park in the Democratic Republic of Congo.
Credit: Jan-Joseph Stok
Share

RUMANGABO, Democratic Republic of Congo — “We can’t move it, unfortunately. If we could, we would,” said Emmanuel De Merode, the director of Virunga National Park for the Congolese Wildlife Authority.

He is responsible for protecting a 3,000-square mile expanse of eastern Congo that is Africa’s oldest and most diverse nature reserve, home to at least a quarter of the world’s remaining mountain gorillas.

It is also home to the M23 rebels and a breeding ground for insecurity.

Scientists only discovered mountain gorillas in 1902. But hunting for bushmeat and trophies, capture for the exotic pet market, and destruction of their habitat by humans meant that before the end of the 20th Century, they faced extinction.

By the 1980s there were only 250 left, spread across the intersection of Congo, Rwanda and Uganda. Their numbers have increased in recent years. The most recent World Wildlife Fund census estimates the population to be 880.

Gorillas remain a critically endangered species, however, and their existence is made all the more precarious by this latest fighting in eastern Congo.

The task of protecting the gorillas of Virunga must rate as about the toughest job in conservation.

The 42-year old De Merode is not alone. He commands 270 rangers, a well-equipped paramilitary outfit trained over the years by British and Belgian Special Forces. These are no Yogi Bear-style Ranger Smiths. They carry AK-47s, belt-fed machine guns and rocket-propelled grenade launchers.

When M23 rebels sealed control over a large chunk of eastern Congo in July, the battle centered on De Merode’s headquarters in Rumangabo.

The ranger station and its new $1.2 million tourist lodge are spread along a forested ridge below the Matterhorn-like spike of Mount Mikeno, where the gorillas live, and within firing range of one of the country’s largest army barracks.

“Some of the most violent fighting took place right here,” said De Merode, the scion of Belgian royalty who has worked in Congo for two decades.

Standing on the terrace of the empty lodge, he described combat helicopters firing rockets, mortars flying overhead, explosions shaking the hills and bullets slapping into trees as civilian staff and rangers’ families sheltered in the wine cellar.

For days De Merode and 40 of his rangers dug trenches, stacked sandbags and defended their headquarters against the army, the rebels and looters. It was “the highest level of violence I’ve seen,” he said.

Virunga, like much of eastern Congo, is used to violence.

Since 1996, more than 130 rangers have been killed in shootouts with poachers, charcoal gangs and militias. Fourteen have died in the last two-years alone. Gorillas have also been victims of the violence: 10 were shot dead in 2007 in an act of terror designed to scare the rangers into not meddling in the illegal charcoal trade, worth about $30 million a year.

For a while things were getting better for Virunga, the rangers and the gorillas, whose population grew slowly but steadily.

A 2008 rebellion, by some of the same men now leading M23, fizzled and the last major rebel group in the area — a gang of Rwandan Hutu holdouts responsible for the 1994 genocide — was getting weaker by the year.

Tourists started to come to Virunga in growing numbers, from 550 in 2009 to 3,300 last year. The European Union funded construction of the $400 a night Mikeno Lodge with its dozen private bungalows built from lava stone, mahogany and thatch.

De Merode expected 5,000 visitors this year. But that was before yet another rebellion erupted.

Armed groups have proliferated in the wake of the recent uprising, dragging park security down. Unlike the Congolese national army, the rangers are trained, armed, paid and fed, making them arguably the most effective arm of state security in the province, and therefore a target for anti-government militias.

So far only one gorilla has died during the current unrest, a juvenile who could not reach veterinary care because of the fighting. But routine day-to-day monitoring of the 200 or so primates has been deeply hampered.

For a while, M23 rebels offered cut-price, illegal gorilla tours to unknowing tourists, raising fears that the animals might come into conflict with untrained guides or catch alien viruses from uncontrolled exposure to humans.

Despite all the fighting, the rangers here hold out hope.

“Protecting animals, protecting nature, is protecting life,” said Innocent Mburanumwe, a senior warden whose father was a ranger before him and whose 10-year old son wants to follow in his footsteps.

“We continue to protect the park because we have no choice,” De Merode said. “If we fail, it will do irreparable damage to Africa’s natural wealth.”