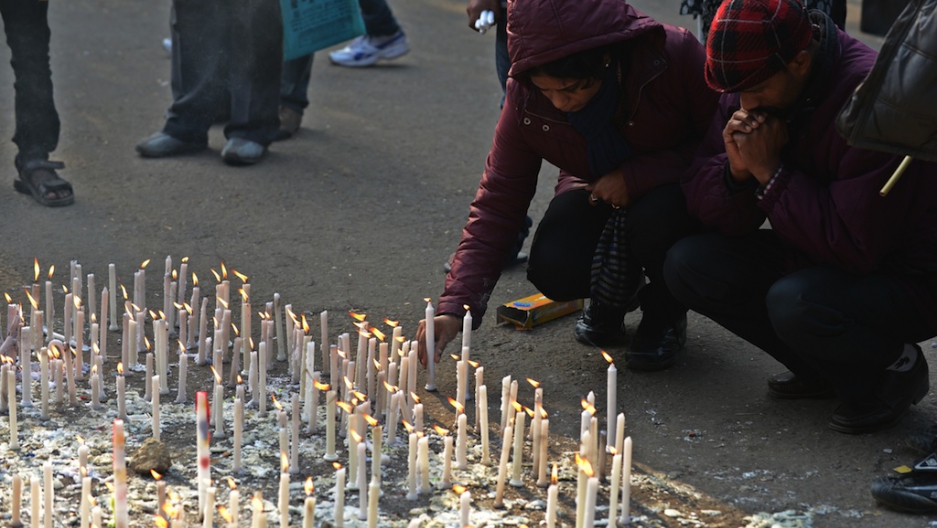 Indian protesters light candles around a mannequin representing the rape victim while paying tribute during a rally in New Delhi on January 5, 2013. Claims of police incompetence and public apathy stirred new anger in the Delhi gang-rape case after the boyfriend of the victim recounted details of the savage attack for the first time. The man was the only witness to the gang-rape of his girlfriend by six men on a moving bus on December 16 which has stirred sometimes violent protests against the treatment of women in Indian society and an apparent rise in sex crime.
Credit: Prakash Singh
Share

The father of the 23-year-old Delhi gang rape victim released his daughter's name on Sunday, despite Indian laws which prohibit the identification of sex crime victims for their protection.

“We want the world to know her real name," the 53-year-old told British paper the Sunday People. “My daughter didn’t do anything wrong, she died while protecting herself. I am proud of her. Revealing her name will give courage to other women who have survived these attacks. They will find strength from my daughter.”

Up until this point, the victim has been kept anonymous by pseudonyms including "India's Daughter," "Nirbhaya," "Abhaya," and "Amaanat," an Urdu word meaning "treasure," the Hindustan Times reported.

Reuters, as well as Indian news outlets, have refrained from using the girl's name, as has Rajiv Mohan, a prosecutor in the case.

"Even if family members have given their permission to disclose the victim's identity for a greater cause, we can't disclose her identity," Mohan said, citing section 228a of the Indian penal code.

Social media, however, quickly took up her father's request, and the young woman's name was trending among Twitter's Indian users on Sunday, according to Reuters.

"Unless her parents object, she should be honored and the revised anti-rape law named after her," Tharoor said. "She was a human being with a name, not just a symbol."

Five men have been charged with the rape and murder of the young woman, and face the death penalty if found guilty, Radio Free Europe reported. The sixth suspect is under the age of 18, and will be tried under the much less harsh title of juvenile.