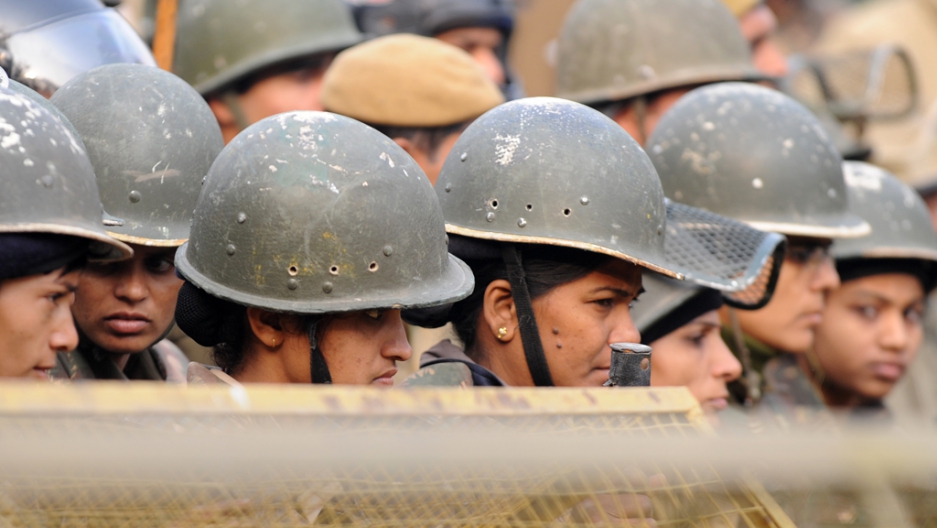 Indian policewomen stand alert behind a barricade during a protest calling for better safety for women following the rape of a student in the Indian capital, in New Delhi on December 27, 2012. Protests across India over the last week against sex crimes have denounced the police and government, with the largest in New Delhi at the weekend prompting officers to cordon off areas around government buildings. One policeman was killed and more than 100 people injured in the violence.
Credit: RAVEENDRAN
Share

Delhi's police force has announced it intends to hire, 2,508 new female police officers, on the heels of an announcement that female police would be made available at all 180 police stations in the Indian capital.

The announcement was made after international outrage over the gang-rape and murder of a 23-year-old medical student on a Delhi bus in December, prompting the Indian government to quickly re-evaluate its protection of women.

The Times of India writes that women will make up 33 percent of the total Delhi police force when the change is implemented, and that the government has asked all of India's states to replicate that 33 percent number.

The Hindustan Times writes that women currently make up a mere 9 percent of uniformed officers in the capital, below the 10 percent currently mandated by the government.

"Sometimes, it becomes difficult for us to make an arrest or assist a female victim due to the non-availability of a female officer,” an anonymous Delhi Police officer told the Hindustan Times.

The male friend of the deceased in the gang rape case told media that he was ordered by police to say "they were doing a good job" in the case, although he said police took the duo to a far away hospital instead of a nearer facility, despite the horrifying nature of his friend's wounds, wrote the Independent.

The Times added that all states and union territories should move to suspend police officers if they fail to register a civilian's complaint — a common problem in rape cases.

Home Minister Sushil Kumar Shinde gathered Indian law enforcement officials to discuss women's safety in India earlier this week, wrote the BBC, claiming that the nation had to crack down on such crimes with an "iron hand."

Earlier this week, the five men accused of committing the gang-rape were charged with murder in India, ">wrote the Guardian. They are scheduled to make their first public appearance in court on Monday.