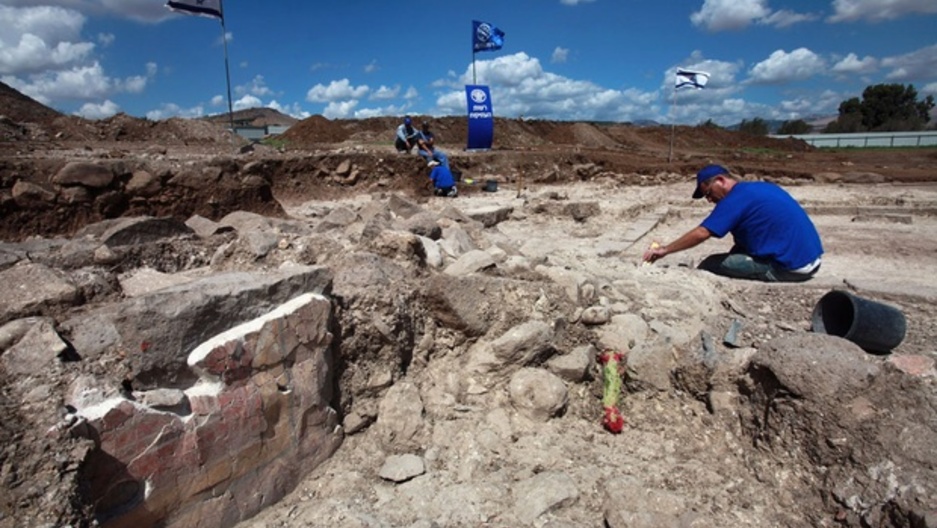 In the time of Jesus, Magdala was a thriving fishing village. It was home to Mary Magdalene — she was "Mary of Magdala." And it was located in the small area along the sea of Galilee where the bible said Jesus lived and ministered and performed most of his miracles.

One of the most amazing discoveries here is a synagogue, one of only seven ever found from the time of Jesus.

"This stone is really unique, we've never excavated anything like it," said Dina Gorni, one of two architects from the Israeli Antiquities Authority who excavated the site.

"It took me 3 days to believe what I am seeing that we are standing in a synagogue from the time that the Beit Hamikdash, the Temple in Jerusalem was working," she said.

All this was a mere twenty inches beneath the topsoil. Incredibly, no other towns had been built over it in the centuries since. And no one had disturbed it. It was waiting, like Pompeii, to be discovered.

Father Juan Maria Solana Is Director of Jerusalem's Pontifical Institute. He said, "To be frank, I felt something about this place and this project, that it was impossible to explain."

He explained that his dream when he arrived in Jerusalem seven years ago was to build a church and hotel for pilgrims in the Galilee. After four years gathering donations Father Solana had enough to buy the land. And the dig began.

The new testament does not specify that Jesus ministered in Magdala, but Father Solana said the discovery of this synagogue means what we thought we knew will have to be re-examined.

"From the Jewish point of view, the position is clear. It's a first century synagogue, beautifully decorated, with pieces of art and an altar such has never been found in any other synagogue from that time," Solana said. "Never, ever. From the Christian point of view, we cannot doubt that Jesus would have been there sometime. The first Christian communities used to gather in the synagogues. They were observant Jews. So it's clear that the first generation of Christians used to gather there."

And that, he said, could mean he and his workmen found the first Church on earth.

The two archaeologists working on the site, Arfan Najjar and Dina Gorni — one Muslim and the other Jewish — give cautious support to this theory.

They point out that the synagogue was located on the outskirts of Magdala. And it was built for a congregation of around 120, not the thousands who lived there; for people, in other words, who marked themselves off from the rest of Jewish Magdala.

Tramping around the site on a sunny winter's afternoon, the Sea of Galilee shimmering a few feet away, Gorni is still in awe of what they've found here, and its importance for both Christians and Jews.

"You can hear about or read about it, but to see it, it's only here. The story about Jesus and Mary Magdalene, the synagogue, the altar stone, it's so important to both religions, I think to the world," she said. "It was there for 2,000 years and it was waiting for us, for this generation, to see it, to come and touch it and to come and to pray here again."

When this dig is finished, Father Solana intends to preserve the ruins in an open air museum. He said finding what may be the site of Jesus' first ministry could be a real blessing for his church and hotel being built nearby.