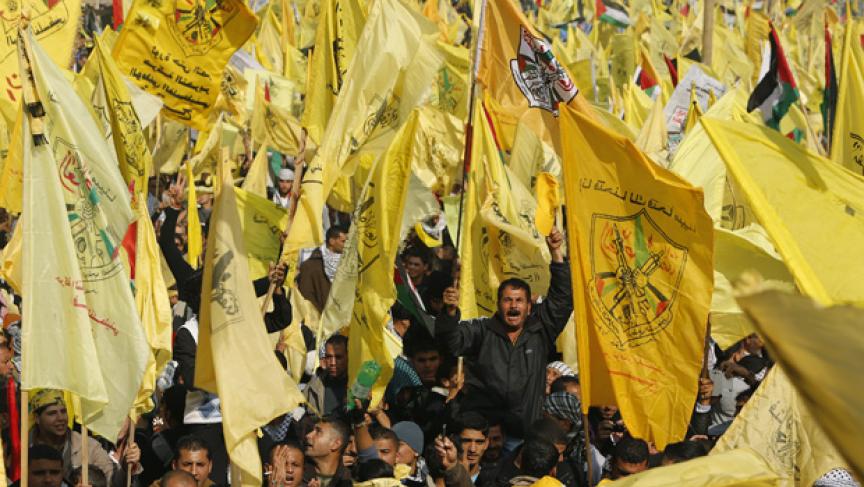 Palestinians take part in a rally in Gaza, marking the 48th anniversary of the founding of the Fatah movement. (Photo: REUTERS/Suhaib Salem)

Share
Huge crowds of Palestinians turned out in the Gaza Strip today to celebrate the 48th anniversary of the founding of the Fatah movement. What might be most significant about the rally is that it happened it all. Gaza is ruled by Hamas. The Islamic militant group that seized control of the Palestinian enclave in a violent coup in 2007. For nearly six years since then, Hamas and the secular Fatah faction have been locked in a bitter — and occasionally, violent — rivalry. Friday's event was the culmination of several days of celebrations. And it was unprecedented. This was the first time Hamas allowed Fatah supporters to hold a mass rally. Gaza resident Walid Medan said this was a great day for all Palestinians. "Today is the start of the Palestinian revolution and the beginning of Palestinian freedom," he said. "This was the first bullet fired and the start of the resistance led by the late Yassir Arafat," the founder of Fatah. Top Fatah officials from the West Bank, the separate Palestinian territory ruled by Fatah-dominated Palestinian Authority, went to Gaza to join the celebration of tens of thousands. Not too long ago, these same officials were afraid to set foot in Gaza. But today, they met crowds waving the party's yellow banner and watched a recorded speech by Palestinian Authority President Mahmoud Abbas. "We should work together in unity," Abbas said. "There is no better choice to reach our national goals and to reach victory. Regards to our brave prisoners and to our people inside the country and the diaspora." Mkhaimer Abusada teaches political science at Al Azhar University in Gaza. He said Friday's Fatah rally sends a clear message to both Hamas and to Israel from Abbas, who is known by Palestinians as Abu Mazen. "Abu Mazen is [still] politically relevant," Abusada said in a phone interview. "He is representative of the Palestinians as a leader of Fatah, as a leader of the Palestine Liberation Organization." "Hamas hasn't been able to wipe out Fatah or hasn't been able to cancel Fatah from the streets of Gaza." Friday's event does not suggest that Palestinian reconciliation is immediately at hand, Abusada added. But he suggested that the atmosphere between the two political enemies might be starting to change. Sabri Saidam is an advisor to Mahmoud Abbas and a Fatah leader based in the West Bank city of Ramallah. Speaking from London, Saidam said it's high time for Palestinians to end the political divide, even if that means angering Israel and US by bringing in militant groups. "Having a political party that opposes your opinion into your scene, within your arena, is much better than excluding that party and turning it into a militant party that has no option but to destroy your politics," Saidam said. "Including Hamas, including Islamic Jihad will be a constructive step in the right direction." Further steps, Saidam said, will be the reconstruction of the Gaza Strip. And then, holding Palestinian elections for the first time since 2006. As a reminder of some of the challenges ahead, the rally in Gaza City ended early today, after reports of fights breaking out between rival groups within Fatah.