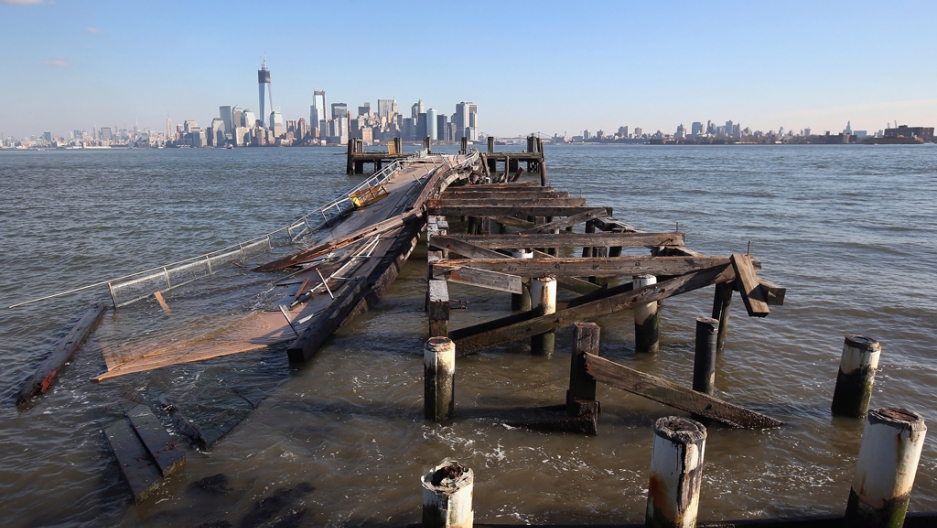 A dock sits damaged near the Statue of Liberty which, remains closed to the public six weeks after Hurricane Sandy on December 13, 2012 in New York City.
Credit: John Moore
Share

Lawmakers in the US House of Representatives expressed their outrage over the House not acting on a Superstorm Sandy relief bill on Tuesday night.

President Barack Obama urged House Republicans to act on the Sandy relief bill on Wednesday morning, "When tragedy strikes, Americans come together to support those in need."

He said, "I urge Republicans in the House of Representatives to do the same, bring this important request to a vote today, and pass it without delay for our fellow Americans," according to The Washington Post.

Members of both parties criticized Speaker John Boehner late on Tuesday for halting a vote on the relief bill which would provide $60 billion in aid to states ravaged by Superstorm Sandy in October 2012, BuzzFeed reported.

New York Rep. Peter King, a Republican, was especially scathing in his criticism of the Republican leadership. Appearing on Fox News on Wednesday, he said, "These Republicans have no problem finding New York when they’re out raising millions of dollars," according to Politico. "They’re in New York all the time filling their pockets with money from New Yorkers."

"I’m saying right now, anyone from New York or New Jersey who contributes one penny to congressional Republicans is out of their minds. Because what they did last night was put a knife in the back of New Yorkers and New Jerseyans. It was an absolute disgrace," said King.

When American citizens are in need we come to their aid. That tradition was abandoned in the House last night. #SandyBill

As New York Magazine noted, if no vote occurred, the bill would have to be reintroduced and passed all over again once the new Congress was in session.

"I truly feel betrayed this evening," said New York Rep. Nita Lowey. "We can pass this bill tomorrow with bipartisan support," she said, according to NYMag.

"We cannot leave here doing nothing," said House Minority Leader Nancy Pelosi, according to BuzzFeed. "That would be a disgrace."

"The speaker is committed to getting this bill passed this month," said Boehner spokesman Michael Steel, according to BuzzFeed.

On Wednesday afternoon, New Jersey Gov. Chris Christie held a press conference regarding the relief bill, saying, "Shame on you. Shame on Congress." Christie blamed the House majority and Boehner for inaction on the bill, vowing that he and New York Gov. Andrew Cuomo would work toward getting aid.

Later, King announced that Boehner said the House would vote Friday on $9 billion in aid of the relief bill. CNN reported that the House would then vote on the remaining $51 billion on January 15, both under the next Congress.

Boehner's re-election as speaker was temporarily called into question as lawmakers expressed their outrage at his decision not to allow a vote on Tuesday night, but King and fellow Republicans from New York and New Jersey said they would vote for Boehner on Thursday, according to CNN.

Watch Representatives express their outrage on the House floor:

Social media wasn't quiet about the issue either: