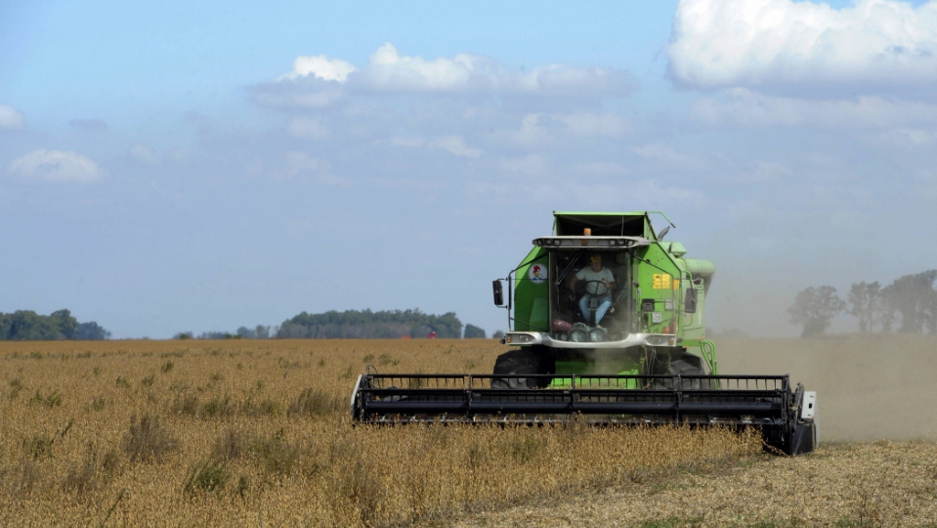 LIMA, Peru — Are genetically modified crops “Franken-foods” or the answer to global hunger and climate change?

That is the dilemma dividing Latin America, where vast quantities of GM crops are grown. Ecuador’s constitution actually prohibits them and Peru recently voted for a 10-year moratorium.

Outside the US, no region has a greater expanse of agricultural land sown with genetically modified organisms (GMOs) than South America.

Together, Argentina, Brazil and Paraguay have roughly 120 million acres of GM crops, principally soybean, but also significant amounts of corn.

Advocates say they increase yields, allowing the world to feed a growing population, and will even help farmers adapt to climate change.

But critics have long warned of the dangers, both to the environment and human health, as well as the way so-called GMOs can make farmers dependent on the corporations that provide the seeds and complementary products.

Environmentalists are concerned that GM crops could trigger new allergies, or could cross-pollinate with nearby non-GM crops, allowing their manipulated gene sequences to enter wild plants, with unknown but potentially far-reaching results.

The latter happened in 2003 in Mexico — where corn was first cultivated by humans and which still has an unrivaled diversity of wild and domesticated maize — when UC Berkeley scientists discovered DNA from GM corn had entered into local crops.

“The impact has been brutal, not just because they are GMOs but because of the herbicides that they need,” Carlos Vicente, of the Argentine branch of Grain, a nonprofit that advocates for small farmers, told GlobalPost.

“It is all about Monsanto selling more seeds and agrichemicals and hooking the farmer,” he added, in a reference to the St. Louis, Missouri-based corporation that has largely spearheaded the GM revolution.

According to Vicente, 60 percent of Argentina’s entire agricultural surface — 48 million acres — is now used to grow GM soy, mainly for export for both human consumption and as livestock feed.

For a country once known as the “breadbasket of the world,” that represents a huge departure from its traditional staples of beef and wheat. The change began in 1996, when — without any legislation or government oversight — the first GM soy was planted.

According to Vicente, Argentina’s massive soy harvest in turn requires an annual dowsing of 50 million gallons of Roundup, an herbicide manufactured by Monsanto, which has provided many of the GM soy seeds to Argentine farmers.

Meanwhile, the government of President Cristina Fernandez de Kirchner has also agreed to Monsanto’s demands that farmers be banned from re-sowing seeds from its patented crops, a similar law to that in the US, where growers must buy more from the company after every harvest.

That measure hangs in the balance, Vicente said, after a backlash from environmental groups and furious farmers, although Fernandez still hopes to pass it.

But not everything is plain sailing for GMOs in Latin America. In November, Peru’s congress approved a 10-year moratorium on the import and cultivation of GM seeds after a protracted debate.

The previous government of President Alan Garcia came close to allowing the sowing of GM crops in Peru after heavy lobbying from agricultural corporations.

But Garcia was outflanked by the nation’s burgeoning gastronomic movement.

Several of the nation’s leading chefs — a revered profession here — warned that GMOs would undermine the diversity of Peru’s native crops, on which they depend for their culinary creations, and its rapidly growing exports of organic produce.

Instead, they argued, Peru should be looking to empower small farmers to continue producing a wide variety of high-quality, natural crops and effectively act as the custodians of that rich genetic reservoir. They also insisted that GM produce does not taste or look better than natural varieties.

“There are a huge number of plants in Peru with all kinds of properties which we are not currently making the most of as it is, although we did previously and could again in the future,” top Lima chef Pedro Miguel Schiaffino told GlobalPost.

“What we should be doing is re-evaluating and rescuing them,” he added. “In a country as bio-diverse as ours, GMOs make no sense.”

GlobalPost contacted several of the companies that market GM seeds in Latin America. Cargill and Monsanto failed to respond, and Dupont said its staff was too busy to discuss the matter.

However, Richard Breum, a spokesman for German pharmaceuticals giant Bayer, did provide written answers. He described GM crops as being “the most intensively studied plants in the world.” That research has cleared them of being harmful to human health, he said.

Breum acknowledged the criticism that GM crops have compromised genetic diversity but blamed that on modern large-scale agricultural techniques rather than GMOs. “Farmers can decide for themselves,” he added.

Yet those arguments leave many unconvinced. Costa Rican Congressman Claudio Monge said he was increasingly confident that legislators there were on the verge of rejecting an application from a Monsanto subsidiary to grow GM corn.

“Costa Rica is a small country that depends heavily on ecotourism,” Monge told GlobalPost. “We have 6 percent of the world’s biodiversity right here and all the genetic diversity of crops we need naturally. We should not be chopping down forest to sow GM corn or pineapples.”

Both Peru and Costa Rica are known for their biodiversity, with each country earning valuable tourist dollars from their tropical rain forests, which are also a source of national pride.

And they promote distinct agricultural models from Argentina, Brazil and Paraguay — and most of the US — where a single crop is grown on huge fields that stretch to the horizon.

But with many of those vast areas dedicated exclusively to GM harvests, “Franken-foods” are now an integral part of the global food supply.
And

it may only be time that tells what their effects on human health and the environment really are.