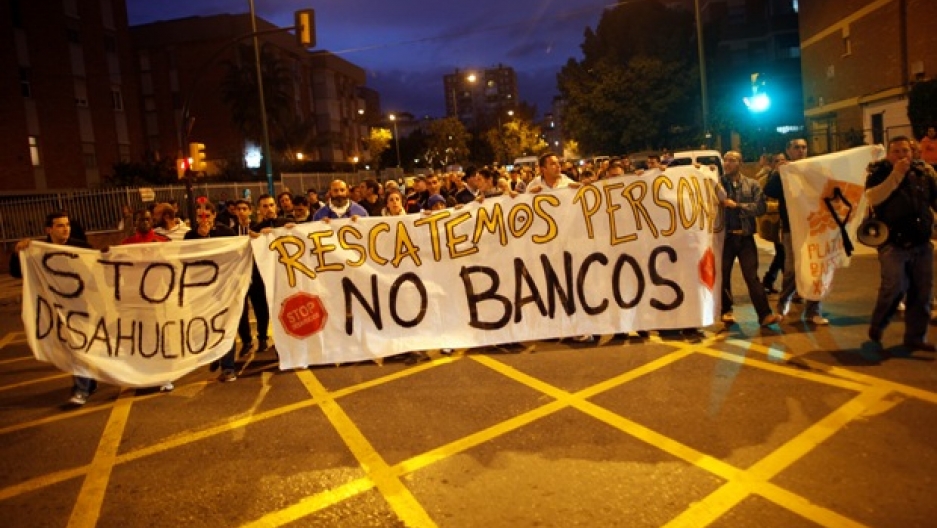 People hold a banner during a demonstration march against evictions in Malaga, southern Spain, last month. The march began at the home of Maria Victoria Mesa, 52, who died after throwing herself off the balcony of her fourth storey apartment following an

Share
In Spain, in 2012, more than 50,000 families were evicted from their homes when they failed to pay their rent or mortgage. As the year wound down a handful of people committed suicide after learning they would be evicted. Now, in Pamplona, a group of experts who help carry out the evictions has said 'No more.' Those experts? Locksmiths. It's a pretty ingenious way to stop evictions, really. The police might come and drag debtors out. But if no one changes the locks on the apartment, the bank can't repossess it. Because the evictees can get back in. And the legal proceedings to get them out again would take months, even years. Banks and government authorities have been evicting an average of two families a day in recent months in and around Pamplona. Locksmiths like Iker de Carlos are hoping to put an end to it. De Carlos says in this small city, the dozen or so locksmiths often know the people they have to lock out on eviction jobs. De Carlos told local TV that locksmiths worked often with the police and bailiffs, evicting families or elderly folks who barely had time to get their pants on before being put out on the street. De Carlos says he and his fellow locksmiths decided last month that they could no longer ignore such suffering. "We're people," he said, "and as people we can't continue carrying out evictions when people are killing themselves." De Carlos was referring to the suicide of a woman last fall, outside Pamplona. As authorities, including Judge Juan Carlos Mediavilla, were arriving to evict her when she jumped from her balcony. Just after her death Judge Mediavilla spoke out publicly, his voice shaking. "We can't let economic problems devolve into tragedies like this," Mediavilla said. The judge called on the government to revise legislation so the growing number of Spaniards who can't pay their mortgages don't end up on the street. Spain's center right government initially said it would take immediate steps to protect about 600,000 of the country's most vulnerable, including families with small children and the elderly. A law was passed allowing some people to negotiate lower payments with banks. But it excludes retirees and any single mothers with a child over 3-years-old. And activists say banks, which had promised to ease up on evictions to avoid a social disaster, have not done so. The social tension over evictions has led to protests across the country, and grows as unemployment rises further. But the locksmiths of Pamplona say their tiny rebellion may be the most effective way to stop evictions, even if its only one lock at a time.