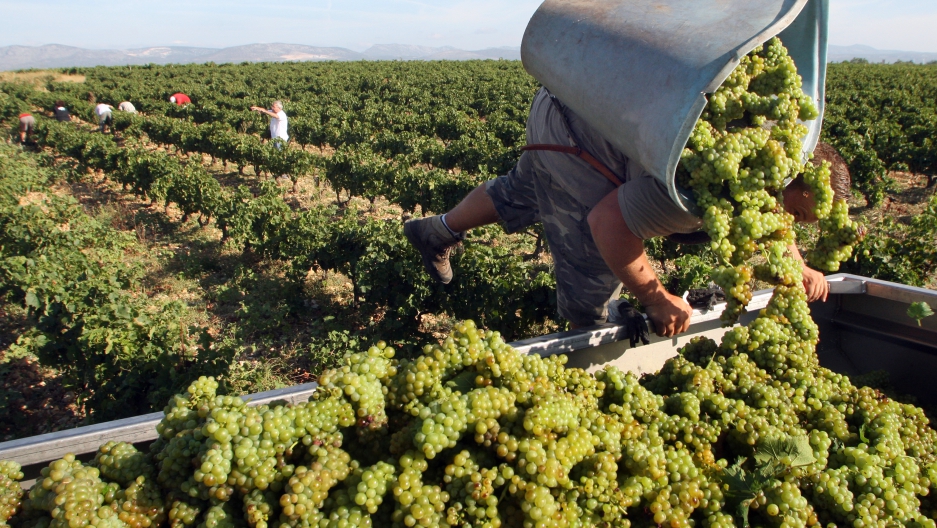 A vintager harvests Muscat grapes in the southern French town of Rivesaltes. The changing environment may force the French to change their strict system for producing wines.
Credit: Raymond Roig
Share

PARIS, France — From rising shorelines to devastating hurricanes, the visible effects scientists say climate change is wreaking on daily life no longer surprise many people around the world.

The French have their own take on just how radically life may change.

“In 20 years, the English will be making Grenache from Chateauneuf-du-Pape,” says Herve Lethielleux, co-owner of L’Etiquette, a wine boutique in central Paris, about a wine variety from subtropical southeastern France.

That’s because the changing climate is affecting the delicate balance of weather, soil and other factors that are central to the production one of their main commodities, something that’s already had a visible effect elsewhere around the globe.

“If you look at Tasmania, it was too cool to grow grapes 25 to 40 years ago,” says Gregory Jones, a research climatologist at Southern Oregon University, about the wine-producing region of Australia. “Today, it’s clearly much more suitable.”

For French winemakers already keenly feeling the effects of growing competition from other countries, higher temperatures in recent years have meant grapes with lower acidity and higher sugar content. That makes for higher alcohol and fruitier — some say cloying — wines.

In France, where wine is an important part of social culture, “alcoholic fruit bombs” are also counterintuitive to the typical palate. Usually paired with food, wine is generally intended to enhance rather than overpower. “You almost don’t want to eat with those kinds of wines, they’re like a meal in themselves,” Sanchez explains.

Lethielleux says many of the winemakers with whom he works have been documenting gradual but persistent changes in climate over the past decades — and noting increasingly earlier harvest dates with growing alarm. “The grapes just aren’t ripening properly,” he adds.

Such concerns raise an increasingly common question: “Will people have to change what they’re planting to adapt?” Sanchez says.

That’s easier said than done, thanks to the strict French system for categorizing wines. They can be classified as AOC — appellation d'origine controlee, or controlled designation of origin — only if they conform to certain varietal constraints in each region.

Drastic changes to grape varieties — even in response to potentially ruinous climate change — can be a risky business for growers. “You can do it but you lose the appellation,” Lethielleux says. “If you’re not a great winemaker, having your wine declassified means you can’t sell it at the same price anymore.”

The changing environment is starting to shake a system that’s been central to European wine for centuries. “Europe has historically been about regional identities based on varieties of wines and particular styles,” says Jones, a specialist in the study of climate structure and suitability for viticulture.

“Those that have adaptive capacity in the face of climate change are going to be much more able to adapt across a range of different climate futures,” he adds.

Despite the rising concern, Jean-Pascal Goutouly, a researcher at the Institut des Sciences de la Vigne et du Vin, part of the National Institute for Agricultural Research in Bordeaux, says full-on crisis mode hasn’t yet arrived. “Things are okay for the moment,” he says. “We still have the possibility to adapt to the conditions.”

As this year showed, it’s not only warmer temperatures and earlier harvests that are affecting wine, but more volatile weather in general.

“This is a bad year — a lot of disease, a lot of rain, a late spring and a summer that never arrived — and it was dreadful with hail,” Lethielleux says. “The grapes are all stressed: They’re full of sugar, but they’re not ripe.”

Weather fluctuation of more than “two or three times more than what you’re used to” may jeopardize the entire French viniculture system, Jones says, adding that the main threat is the combination of factors.

“France has a long, rich history of growing grapes and making wine,” he says. “Production has varied, there are good years and bad years, and French wine growers have always dealt with that.”

“The issue today,” he adds, “is that it appears climates are both changing and varying more than they have historically and our potential to adapt across those climates is more challenged.”

Even if future adaptation is possible, that may be little consolation to winemakers who lost significant portions of their crop this year. The harvest was the smallest in at least 40 years, according to the Agriculture Ministry, which estimates overall production to be down by 20 percent thanks to lousy weather across France.

That’s already a source of consternation around French tables and wine bars. And it’s starting to resonate around the world, as lovers of French wine begin to worry about what climate change may mean for the availability — and price — of their favorite Bordeaux or Bourgogne at their local wine shops.